For past eight months, kids all around the country took on obstacle courses designed to mimic the obstacles their favorite American Ninja Warrior's face on TV. This past weekend, more than 600 of the country's strongest young ninjas gathered in Michigan to see who was the best ninja in their respective age groups.

The Edge Training Center, in Commerce Township hosted a truly historic event. On Saturday, February 17 over 600 kids competed on an obstacle course specifically designed for their age group. This is by far the most kids to ever compete in a single youth ninja competition. Taking it a step further, this is the most ninja athletes to compete in a gym in a single day, and honestly, I don't know of any event, youth or adult, held at a local gym or in a stadium that hosted more competitors in a single day. The Edge staff did a great job hosted an event that ran smoothly. Sure it may not have finished until 1:30 Sunday morning, but come on! 600+ kids through 3 stages of action, that's impressive!

The whole event was live streamed, but due to the massive size and the fact that three age groups were running simultaneously, some age groups were on the National Ninja League Facebook, while others were on The Edge's Facebook.

The real stars of last weekend were the kids. Kids came in huge groups and represented ninja gyms all throughout the country. Some of the gyms with the strongest contingents were Iron Sports, all the way from Texas coached by the speedy Josh Salinas. A crew from NinjaQuest in Georgia coached by Ryan Stratis. An army from the Boston-area gyms Action Athletics, TA Fitness, Vitality Obstacle Fitness, and Ultimate Obstacles. The contingent learning under the Drew Drechsel teaching methods from New Era Ninjas and The Real Life Ninja Academy. A passionate fanbase from Hybrid Fitness in Buffalo, New York. Several members of The Warrior Factory in Rochester, New York. Many competitors were also in from nearby Iron Grip. Other gyms with multiple competitors included: Gravity Forge, LaidBack Ninjas, Kinetic Ninja Warrior Ninjas, Obstacle Academy, High Exposure, and of course many locals from The Edge. There were even more gyms represented than this, but these are the ones I remember.

This was the National Ninja League Finals and all the kids who competed earned their spots by placing high enough in a previous qualifier so these truly were the best of the best ninjas in their age groups. Even knowing that the physical feats that some of these kids are able to do is just ridiculous. This video shows the full Stage 1 which 11-12 year olds had to complete in 95 seconds.

Annnnnnnd complete it they did. In total, 44 "Preteens" completed this course, with the fastest competitors doing so in less than a minute! They're only 11 and 12 years old and they completed 8 obstacles in 95 seconds that most adults likely couldn't complete!

The "Preteens" were not the only age group to post a huge number of finishers, nearly every age group had dozens of kids complete their Stage 1s. Completing Stage 1 was required to move on to Stage 2 the following day. Across all the age groups 199 kids moved on Stage 2 where they faced even more brutal obstacles.

Again the kids showed up and dominated the even harder courses! The section of the live-stream below shows some of the "Teens" on their Stage 2 course, a crazy upper body endurance gauntlet which was still completed by 6 insanely strong young ninjas.

The displays of sheer athleticism continued late into the night when those who completed their age group's Stage 2 moved on to Stage 3. In the end, the top 3 male and female competitors for each age group were decided.

One of the biggest things people praise about the Ninja Community as a whole is the friendliness and camaraderie. These traits are not lost in the youth divisions either. Kids from all over the country were standing side by side cheering on their competitors pushing them to do their best. Sure this was a competition to see who was the best, but every single kid wanted to see every other kid do their best, it was a truly special atmosphere.

Easily one of the coolest moments of the weekend came when 13-year-old Xander Mavrikis completed the Teens Stage 2. During his run Xander flew over a balance obstacle and landed on his back, he completed the obstacle but was clearly in pain. Staff members and coaches huddled around Xander to make sure he was okay, but no more than a minute later he was up on his feet and taking on the next obstacle. Xander completed 3 more obstacles and cleared the course, and when he did, kids from all over the gym jumped over the rope (meant to keep spectators off the course) and swarmed around him jumping up and down in celebration. Due to the injury, Xander did not compete on Stage 3, thankfully nothing was broken but at the time no one knew that and no one wanted him to risk further injury. 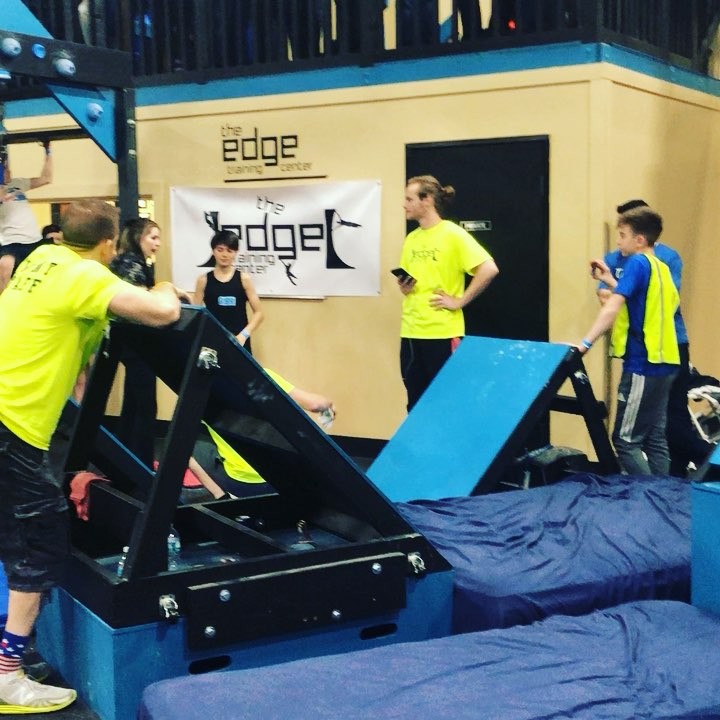 The complete results for all age groups can be found here

I personally spent most of the event handing out chalk to the older age groups, or shouting the names of competitors about to run to the crowd in doing so I was right in the action and the whole time I was amazed at how talented ALL these kids were and how much they all loved what they were doing.