As we approach the dawn of the tenth season of American Ninja Warrior, I thought now would be a good time to take a look back at how the show has changed over time. There are tons of different aspects we could focus on to observe this change, but for this piece, we will be focusing on one in particular, the logo. There are obviously lots of logos that are made every year for promotional purposes etc, but I tried to focus solely on those logos used during the actual shows.

Hopefully, you're aware that American Ninja Warrior is a direct spin-off of the Japanese game show Sasuke. (As of writing this 21 different countries have created their own Sasuke spin-offs).

Sasuke first aired in Japan in 1997, and with the exception of some lighting/accents, their logo has remained the same throughout the show's 21-year history.

Sure they added the word Rising to their title for seasons 28-30 follow their one-year hiatus due to Monster9's bankruptcy, but even still, that logo was essentially the same. 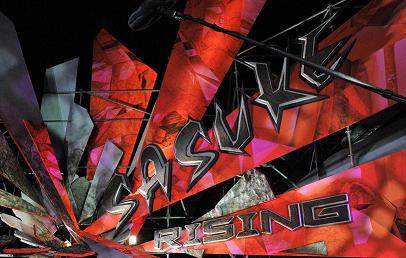 Now I mentioned that Sasuke first aired in Japan in 1997. However, for most Americans (and citizens of several other countries outside of Japan) the first time they were introduced to Sasuke was in 2006 when an edited version with English subtitles was first aired. This show, of course, was simply called Ninja Warrior.

Now I know this piece is just about the logos but the whole opening sequence to Ninja Warrior is too good not include, and the logo on the billboard at the end was the route of many future logos:

The American Ninja Challenge logo was essentially just the Ninja Warrior billboard logo from the introduction sequence with the text changed to represent the challenge. 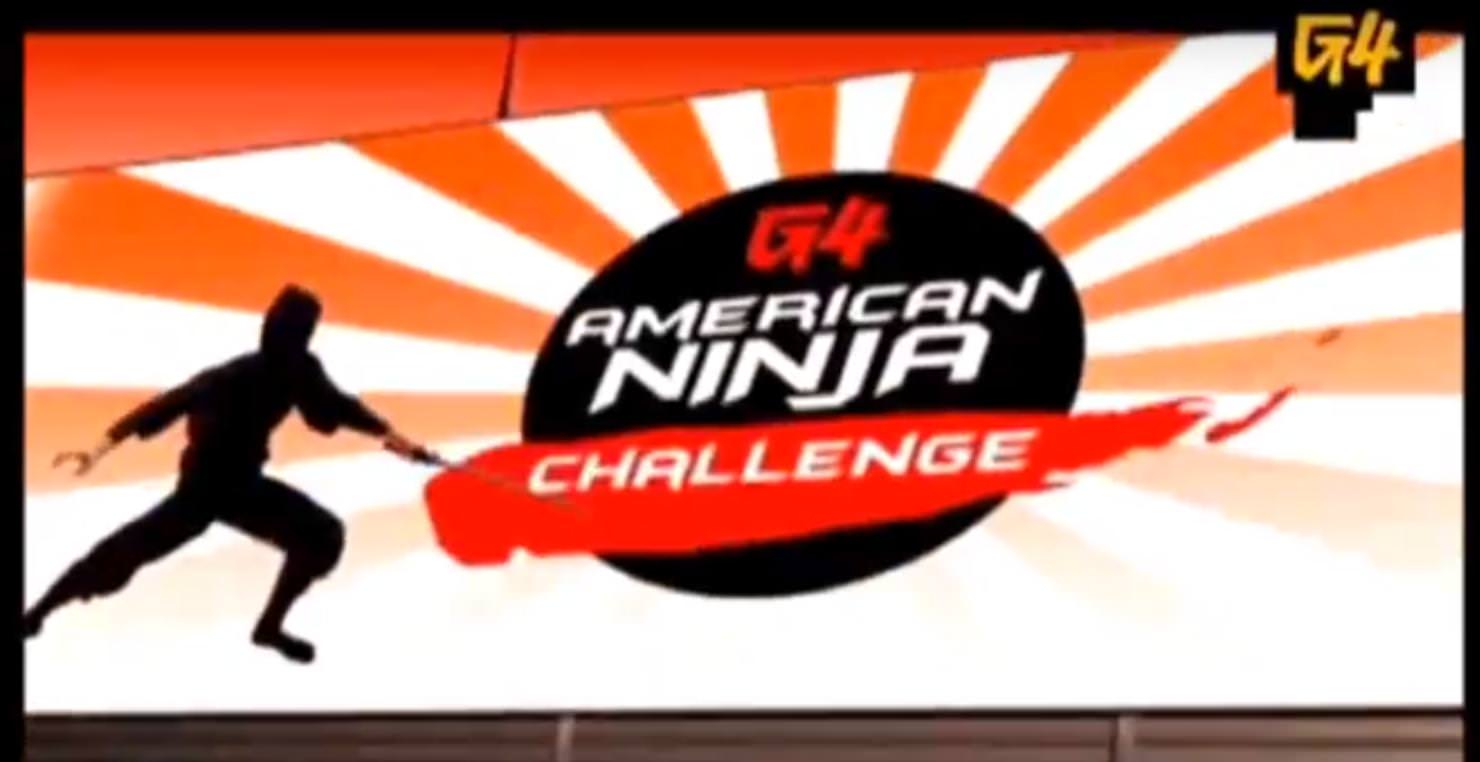 There were 4 iterations of American Ninja Challenge from 2006-2009. Each essentially used the same logo and only added the respective number of the challenge to it. 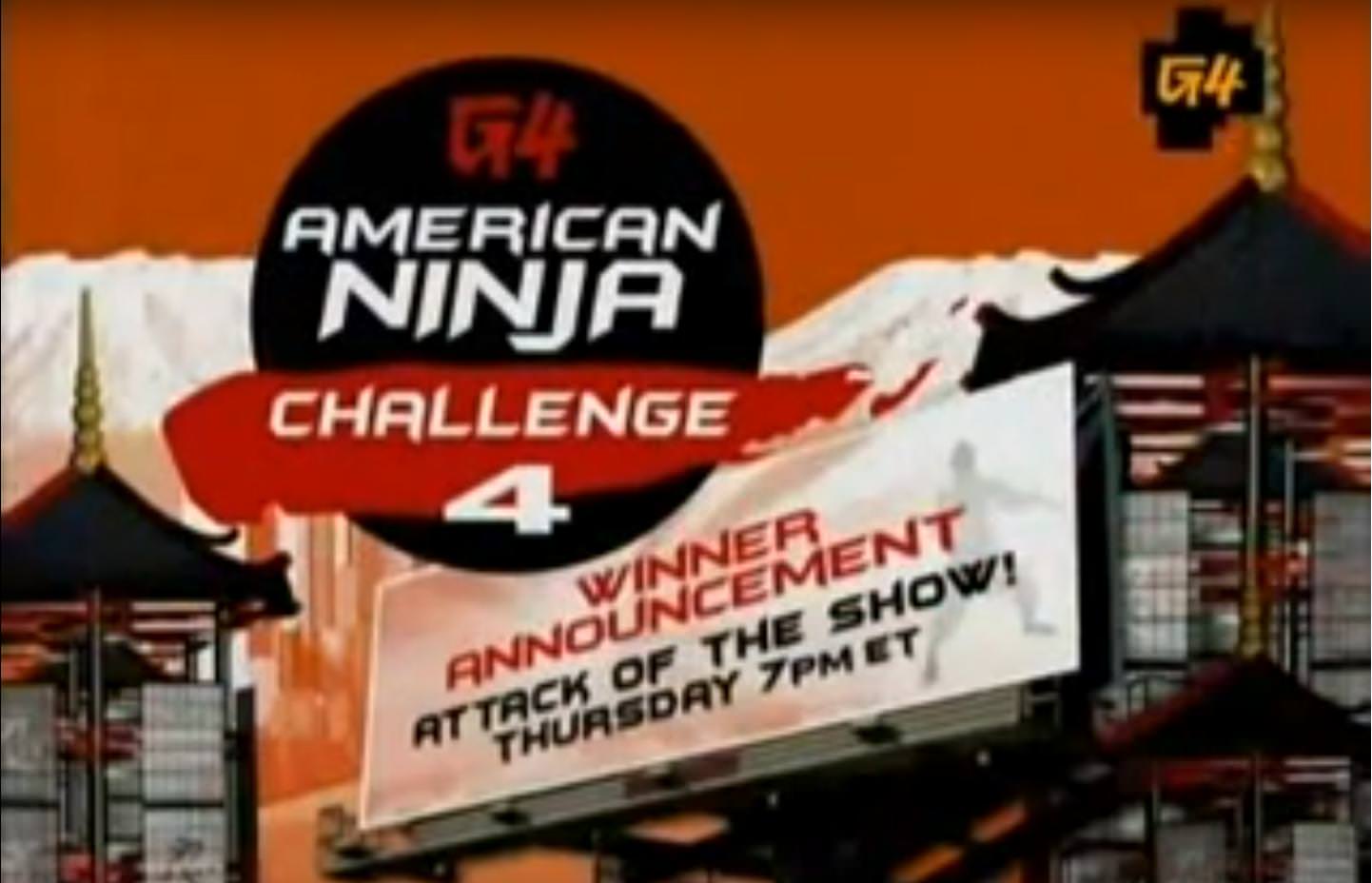 The first season of American Ninja Warrior kept the "paint swipe" from the Ninja Warrior and the American Ninja Challenge logos (it did change it from red to blue) and brought its own flare to the font. Additionally, the circle which once hinted at Japan's Flag/the Rising Sun Flag was replaced by a star, a more obviously American symbol (the ninja and flag background here were added for promotional pieces and not really what I'm focused on here). 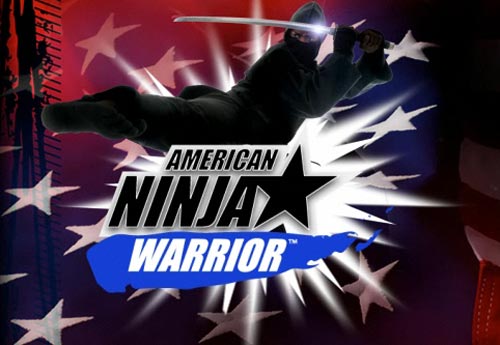 Admittedly, the first season of American Ninja Warrior was pretty different, there were "beach trials" instead of "boot camp." Heck, Matt Iseman didn't start hosting the show until Season 2.

Interestingly, the Season 2-3 logo was more of a combination of the Ninja Warrior logo and the Season 1 logo than anything else. Japan's Rising Sun colors explode from the center where the American Ninja text complete its star and Warrior "paint swipe" reside. 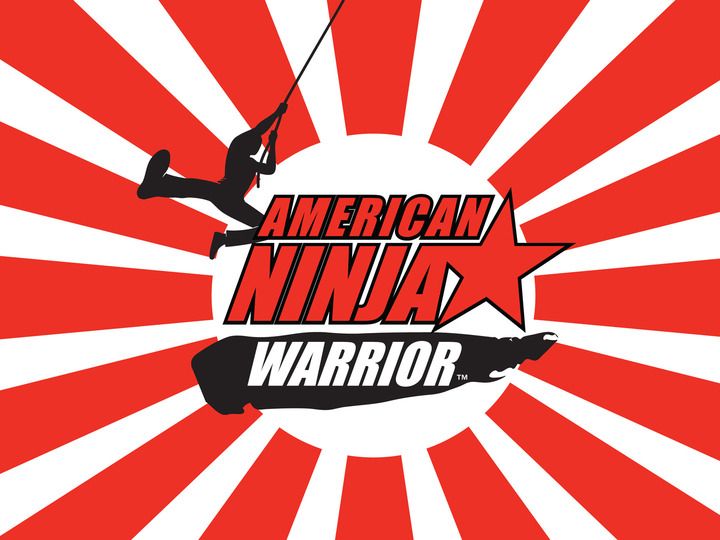 Season 4 saw a lot of big changes to American Ninja Warrior, with the addition of multiple city qualifiers, 100 competitors competing in the finals, and the finals being held in Las Vegas. It's no surprise then that the Season 4 logo was different than the previous logos. 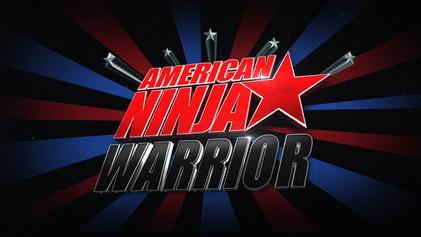 This image with the multi-colored "Rising Sun" effect, the shooting stars, and the more block letter font was the predominate logo of the season, as a version of it was on nearly all the banners. Although the show did experiment with different backgrounds for the logo. The show opened with a ninja (maybe Brent Steffensen?) climbing the Devil Steps in silhouette behind the logo. 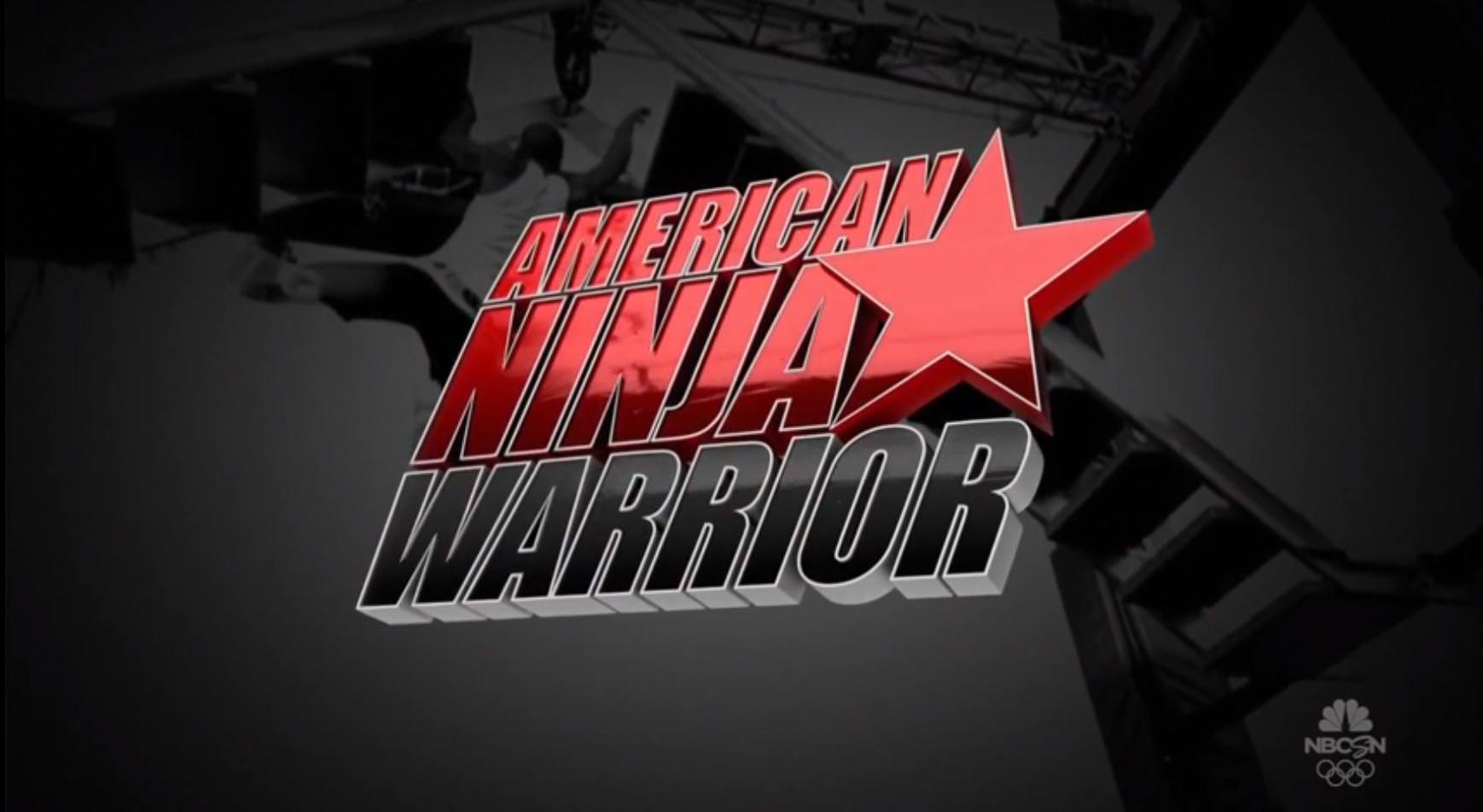 Also, maybe since this logo relies on a 3Dish effect the old "paint swipe" logo still remained for flat monochrome and decals such as on the Warped Wall, and the sign above the starting lines.

For the most part, Season 5's logo was the same as Season 4's. Again, there was some tinkering with the backgrounds. The most common was a blueish white accent but the "Rising Sun" effect was lost and the word Warrior was now almost always appearing in blue when the logo was colored. 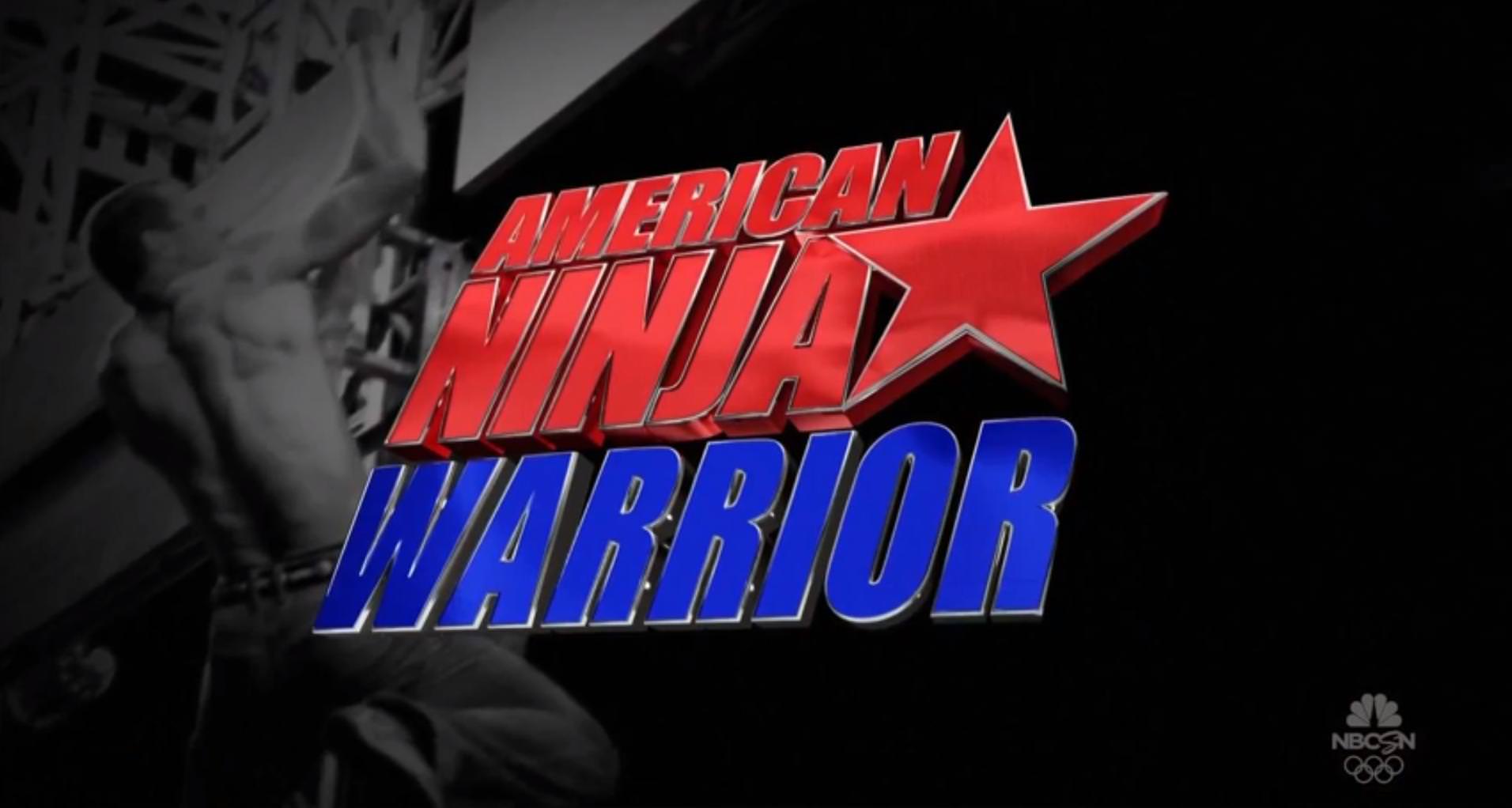 This year's intro background, poster boy was Lance Pekus. Season 5 did mark the first time that "paint swipe" logo was nowhere to be seen. Not above the quad steps. 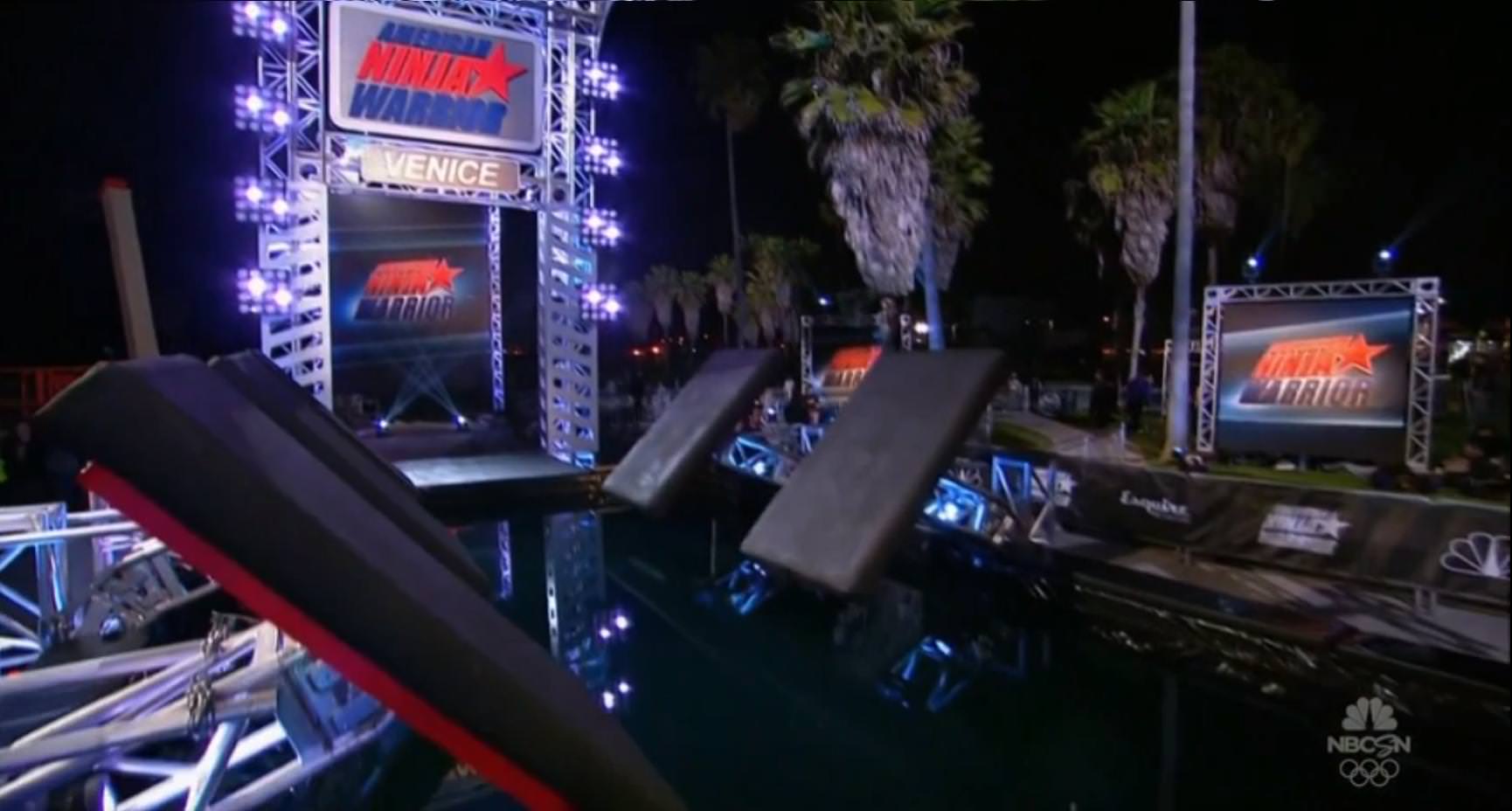 Nor on the Warped Wall 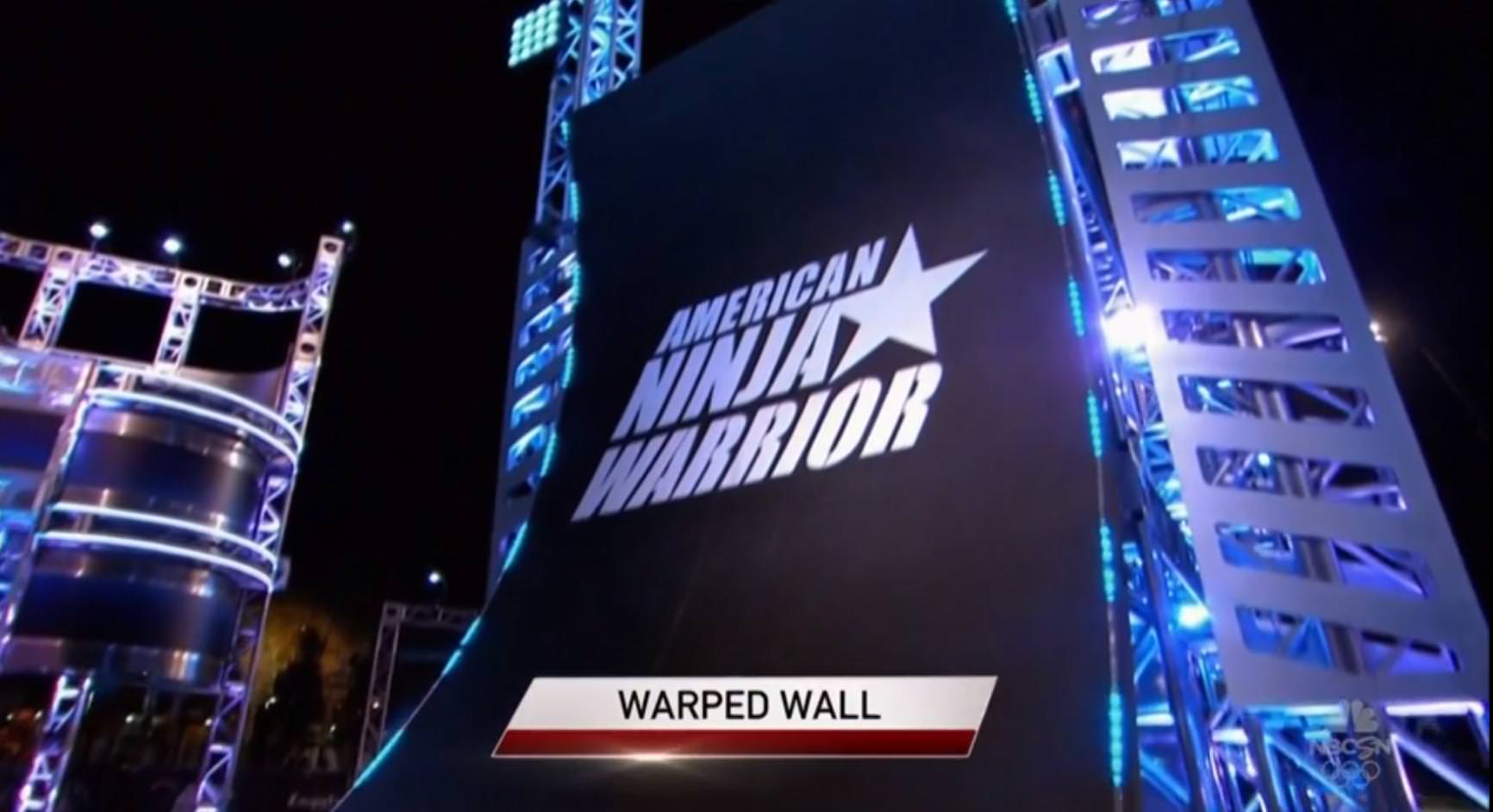 The Season 6 Warrior was again much the same as the previous two. The regional cities and the national finals had their respective cities listed below the regular logo in white. Various red, white, and blue backgrounds were used again. This logo was used above the starting lines, and an all white version appeared on the Warped Wall. 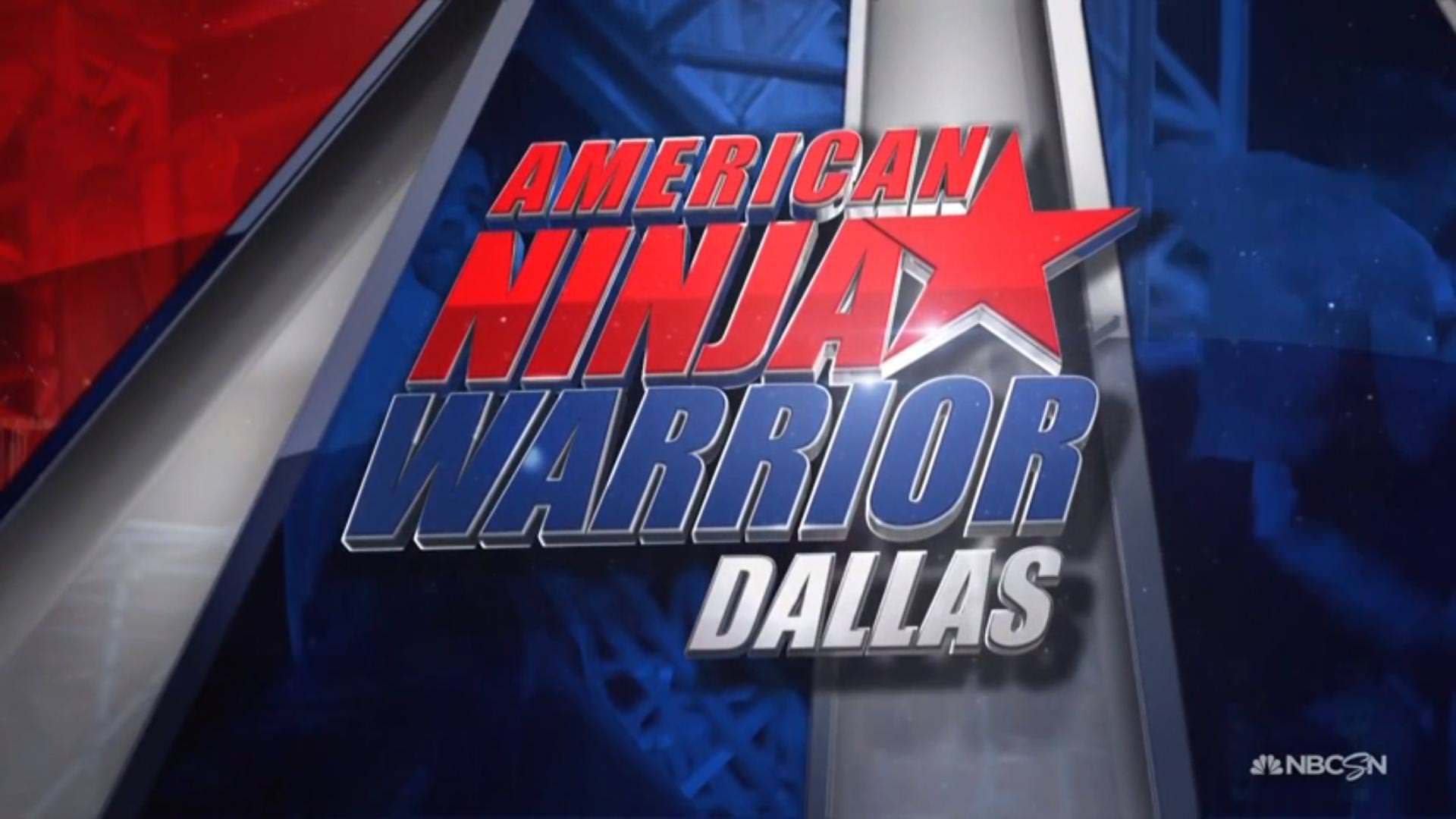 Interestingly, the "paint swipe" logo returned again. However, it was only on select banners with its own unique blue striped background.

Between Season 6 and 7 was the most drastic shift in the American Ninja Warrior Logo. Now completely gone were the "Rising Sun" effect, the "paint swipe", and the star. Here to stay was the shield. So much so that there was literally no change between the season 7 and 8 logos (aside from host cities/year). 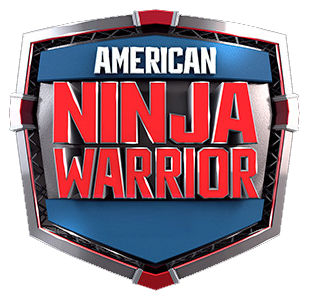 The 3D shield above was used during dynamic transition pieces, while the flat shield below was used on most banners. 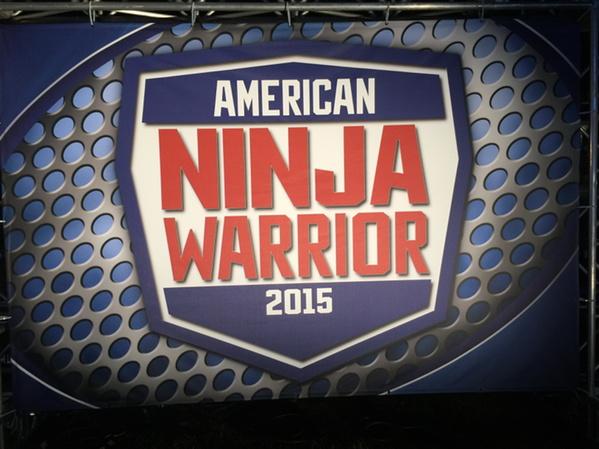 When no colors were available (ie. on the Warped Wall) an all black or white shield was used. 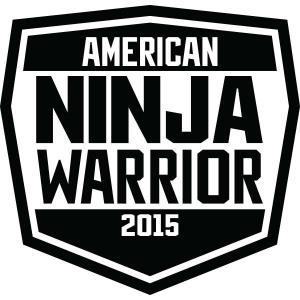 Showing full commitment to the new shield logo They even placed a small ANW shield between Matt and Akbar's name during their introduction.

For season 9, some minor adjustments were made to the Season 7-8 American Ninja Warrior Shield logo. Stars were added on both sides of the word American, and vertical stripes were added below the year/city label. 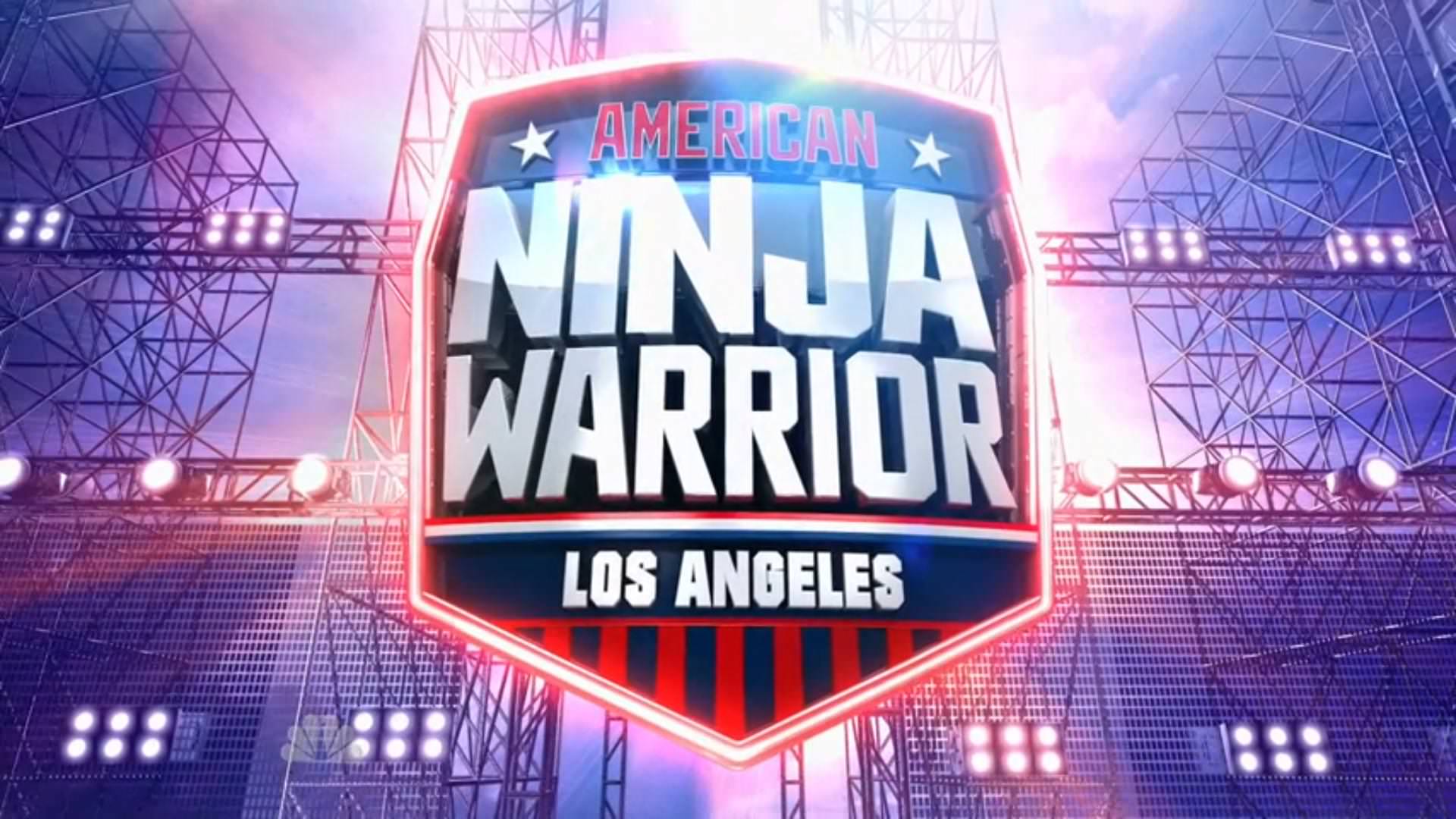 These additions appeared both on the 3D shield as well as the flat shield, which no longer came in a monochrome coloration, as for the first time the Warped Wall's graphic were in full color. 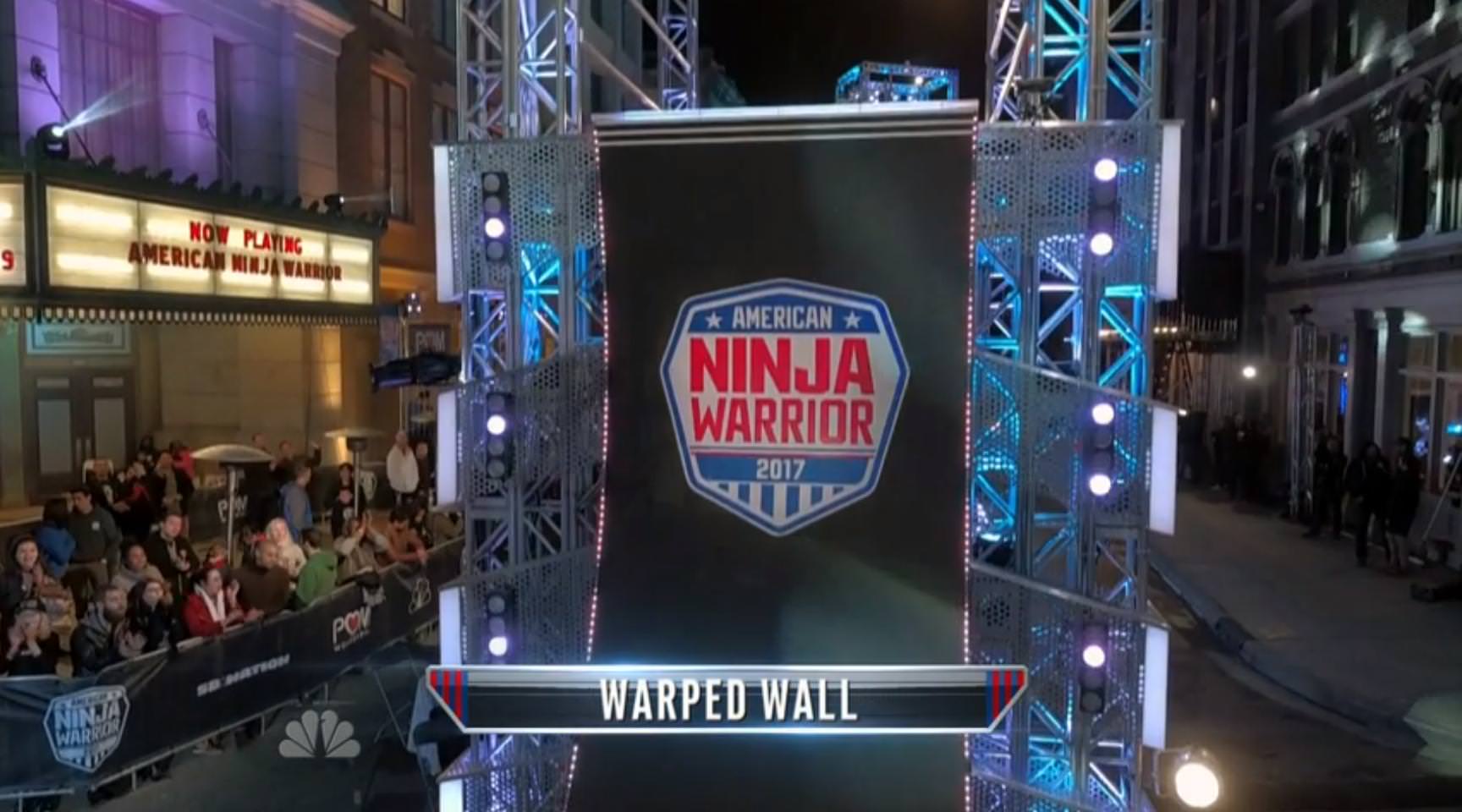 Again, the commitment to this new logo was in full effect. Check out the mini ANW logo introducing Kristin and even the one on her microphone! 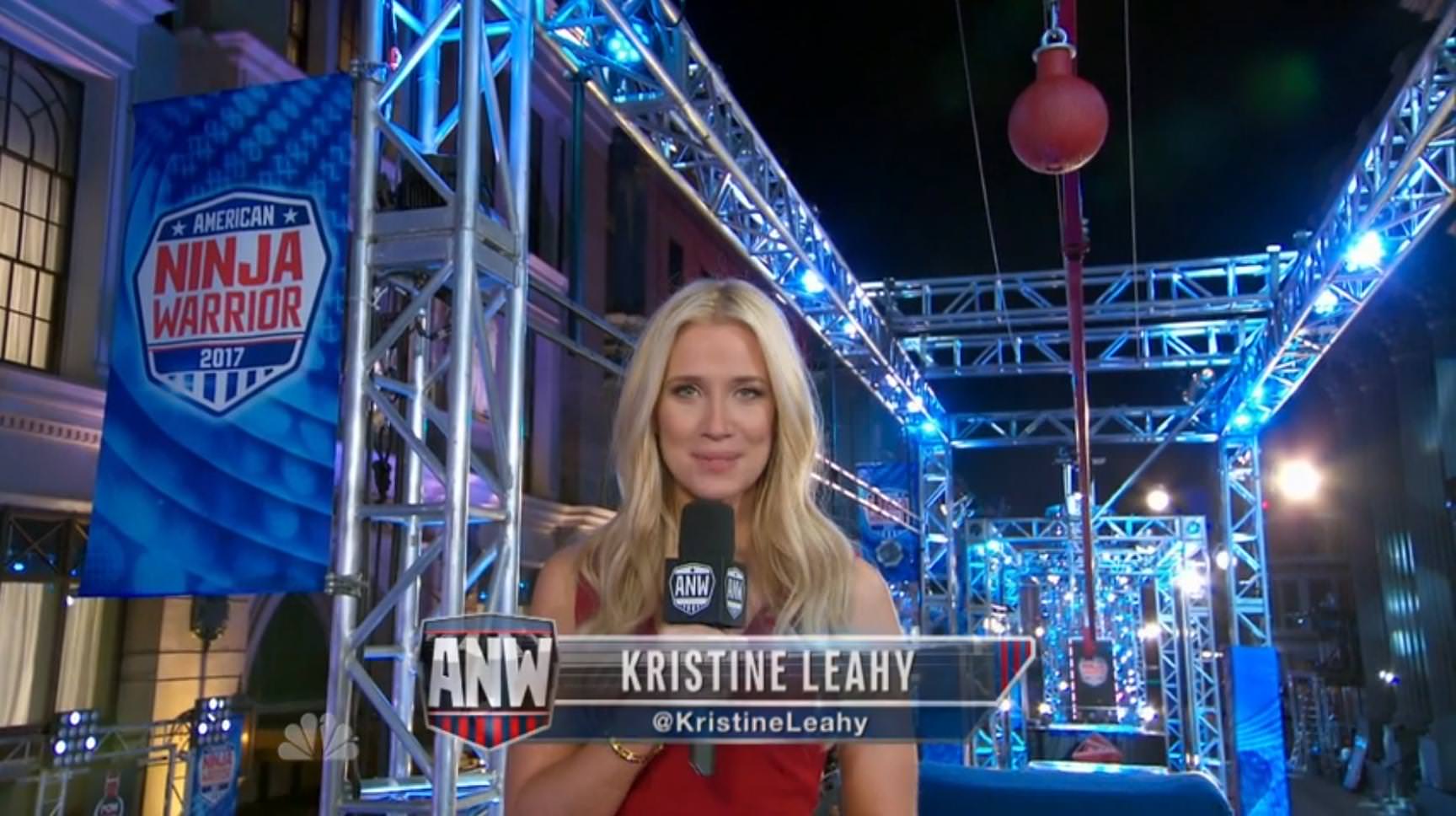 The American Ninja Warrior Logo has come a long way in the past 10 years. It'll be interesting to see what direction it goes next.

Let me know if there are any American Ninja Warrior logos I missed!