The National Finals of American Ninja Warrior Season 9 are underway! Stage 1 has three new obstacles this season: The Double Dipper, Parkour Run, and the Domino Pipes. These new obstacles join last year's new additions: Snake Run, and the Flying Squirrel. Rounding out the eight are two long time mainstays: the Jumping Spider and the Warped Wall. Matt and Akbar pointed that these were the only two obstacles that remain the same since Chris DiGangi last reached the National Finals - Season 4, the first year of the "Modern 'only in America' Era".

Finalists were given 155 seconds (2:35) to complete all 8 obstacles, and reach the buzzer. That's 15 seconds more than last season, and the most ever allowed for Stage 1 in American Ninja Warrior history. Seasons 1-6 varied between 120-130 seconds, Season 7 allotted 150 seconds and Season 8's time limit was 140 seconds. 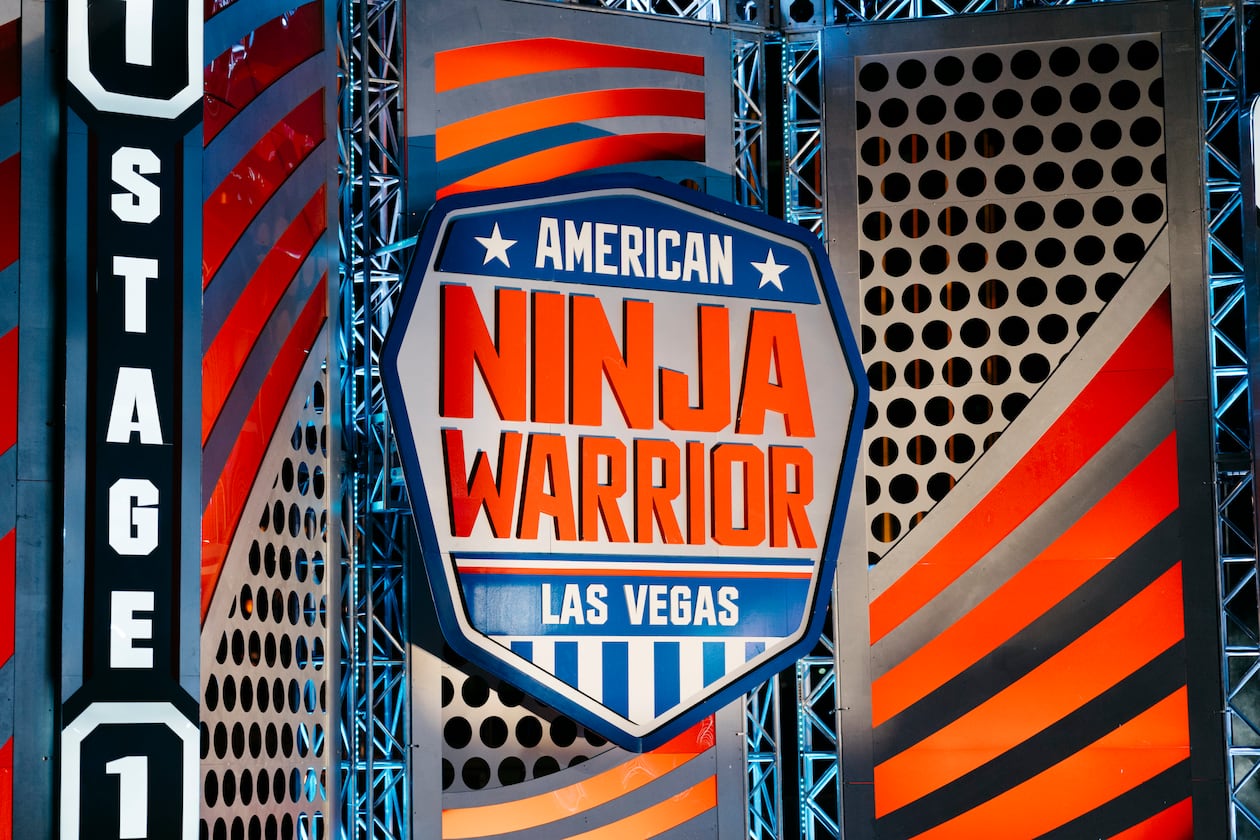 Now admittedly we've only seen half of the competitors (my notes show 44/90... 89 if we knowingly rule out Charlie Andrews after a brutal head injury while filming his "at home piece") so take everything I'm about to say with that in mind.

There really hasn't been a huge Ninja Killer emerge on Stage 1. Last Season's Stage 1 Ninja Killer, the Giant Log Grip (Not including the mini-trampolines) has been replaced by an obstacle that several of the ninjas Alex Weber interviewed said looked like a ton of fun. "A lot of fun" doesn't really instill fear in many ninjas. That would be the Double Dipper.

Sure the Domino Pipes tripped up Chris Digagni and Drew Knapp, but they were both able to over come their awkward situations, a scenario that would not have been possible with previous obstacles in that slot like the Broken Bridge, Coin Flip, or the Spinning Bridge. 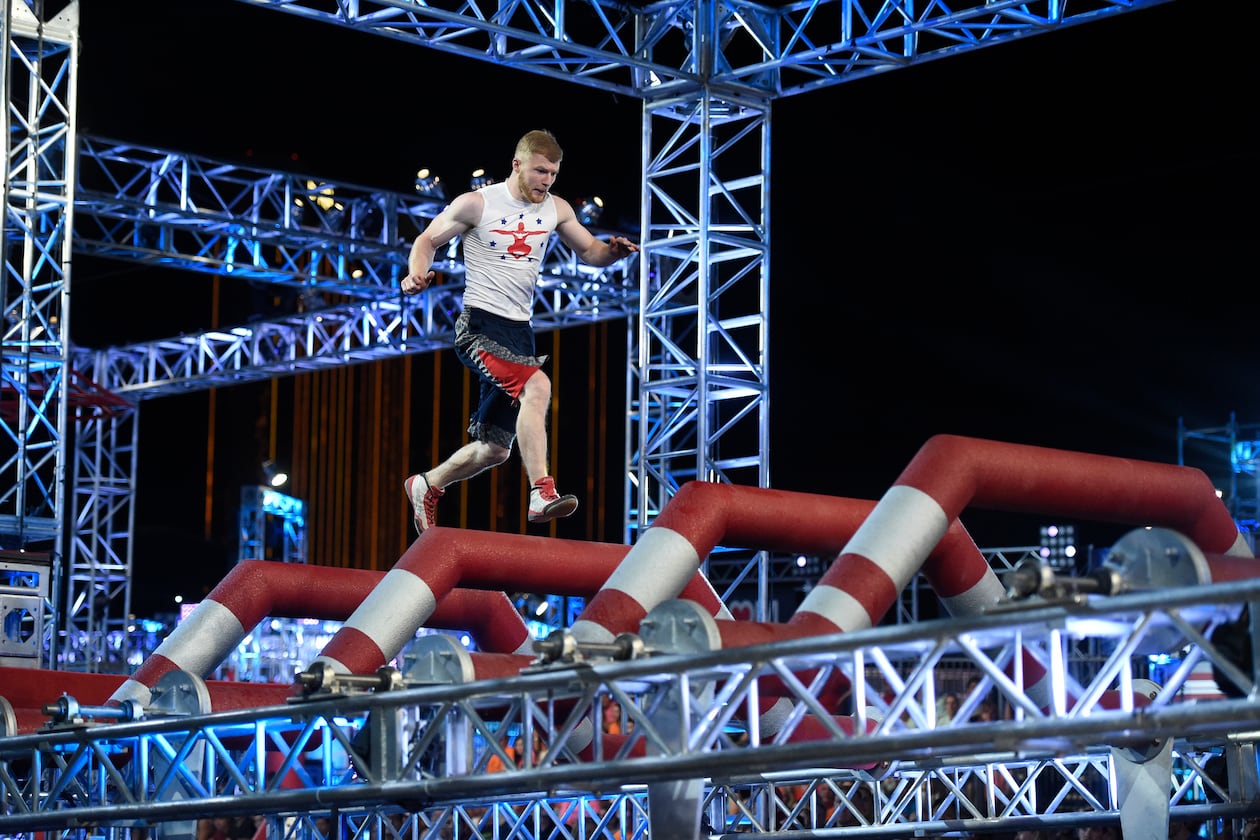 [Cass Clawson runs through the Domino Pipes, with a slight lean forward and fast feet, a good formula to get through most balance obstacles.]

Back in Season 7 the Stage 1 Ninja Killer was the Propeller Bar, which surprisingly only took out 2 ninjas so far this season. The Propeller Bar has traditionally been an extremely difficult obstacle for female ninjas but the girls who competed on Stage 1 made it, and pretty much the rest of the course, look like a walk in the park.

The Stage 1 Ninja Killer for Seasons 4, 5, and 6 was the Jumping Spider, and this year even that didn't seem too difficult. The Jumping Spider eliminated ninjas and has a completion percentage of 83.87% a far cry the brutal 66.10% (39/59) completions we saw back in Season 6. 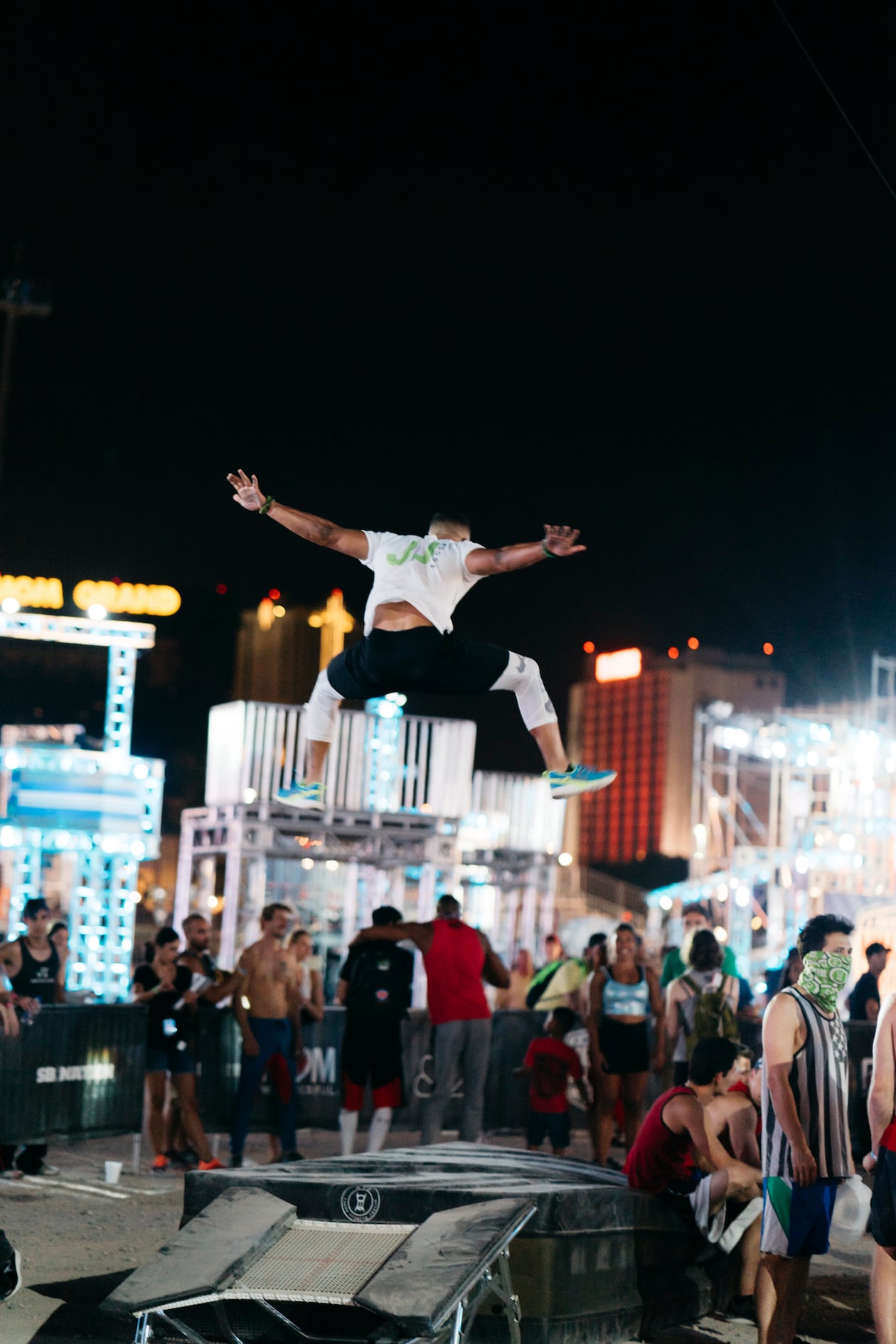 [In the warm-up area, ninjas are given a mini trampoline to "get a feel for the bounce". Here you see JJ Woods figuring out how much bounce he will need to stick the Jumping Spider.]

Now to say the Double Dipper is "easy" would be extremely unfair. This obstacle requires a ton of grip strength, core strength, and coordination to get through. However, this is the National Finals, every competitor who made it this far has proved they have an abundance of those three attributes.

The Double Dipper can easily be broken down into four parts: the first slide, the lache, the re-grab, and the second slide.

For the first slide, ninjas must keep the bar completely level. To do this most ninjas opt of the switch-grip technique (one palm facing away from the body, the second palm facing towards the body). However, as JJ Woods alluded to, if the switch-grip is not something a ninja practices very often it doesn't make sense to use a new technique, and a traditional pull-up grip (both palms away) should work just fine. While sliding a slight bend in the arms and flexed core will help ensure a smooth level ride. 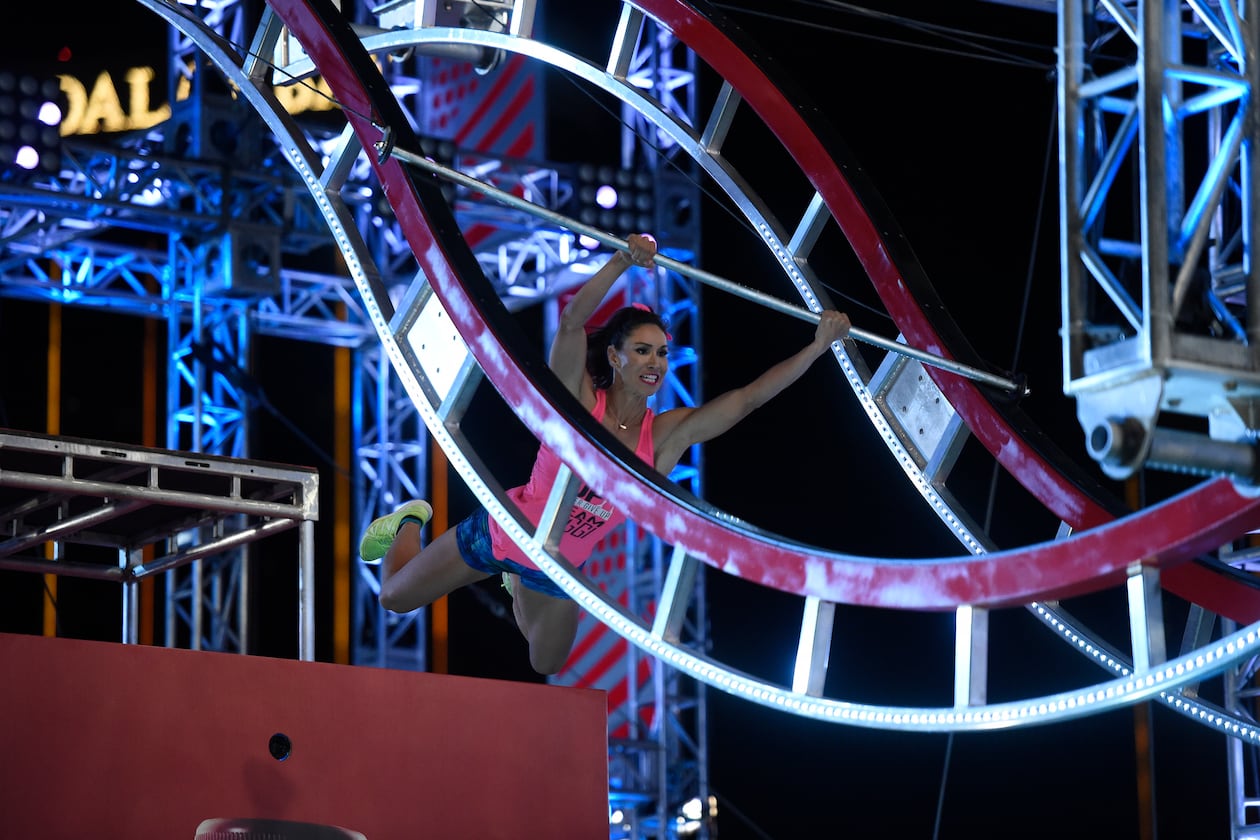 [Maggi Thorne's left hand gets a little bit ahead of her right, slowing down her momentum on the first slide.]

The lache in the Double Dipper is pretty much automatic. The momentum gained during the slide and the upward slope of the first dipper were thoroughly tested to ensure ninjas of all shapes and sizes would be flung far enough and fast enough to reach the second bar. A slight lean forward, would be preferable to ensure a ninjas arms are in the right place to grab the second bar. 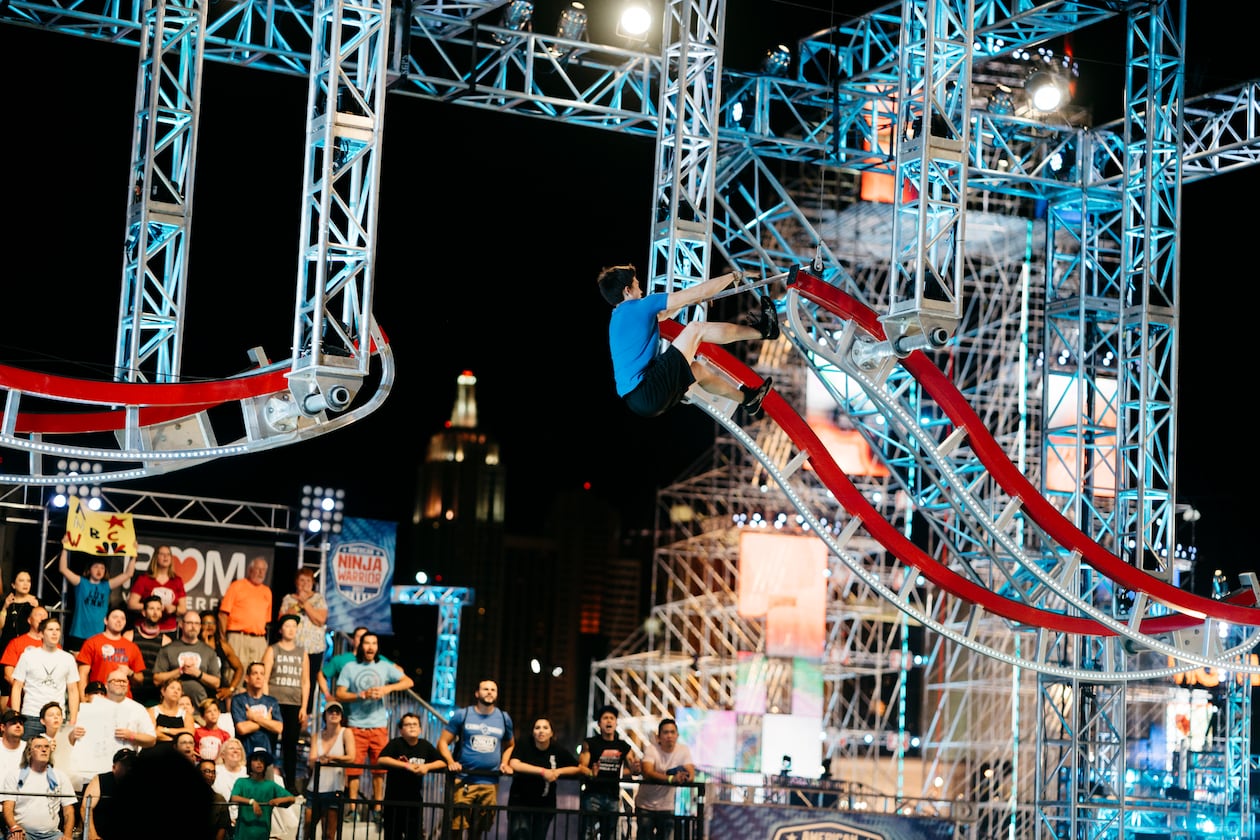 [Eric Middleton's body got a little behind him during his lache, but he still had the momentum to reach the second bar.]

The re-grab is all about coordination. As I just mentioned, ninjas were moving pretty fast off of the first dipper, and as long as they didn't do anything to alter their momentum or flight path the bar for the second dipper should be directly in front of them. They just needed to time their grab correctly, not a ton of technique here, although if they were confident enough ninjas could opt for a switch grip grab (a much harder catch), to better ensure their ability to complete the second slide - again, if catching bars in switch grip isn't something they've practiced a traditional pull-up grip should be fine.

The second slide is the same as the first. A slight bend in the arms and flexed core should fling ninjas right to the landing pad (or in JJ woods case, the back up landing pad). An important thing to note here is re-gripping probably isn't an option as everything is happening so fast. 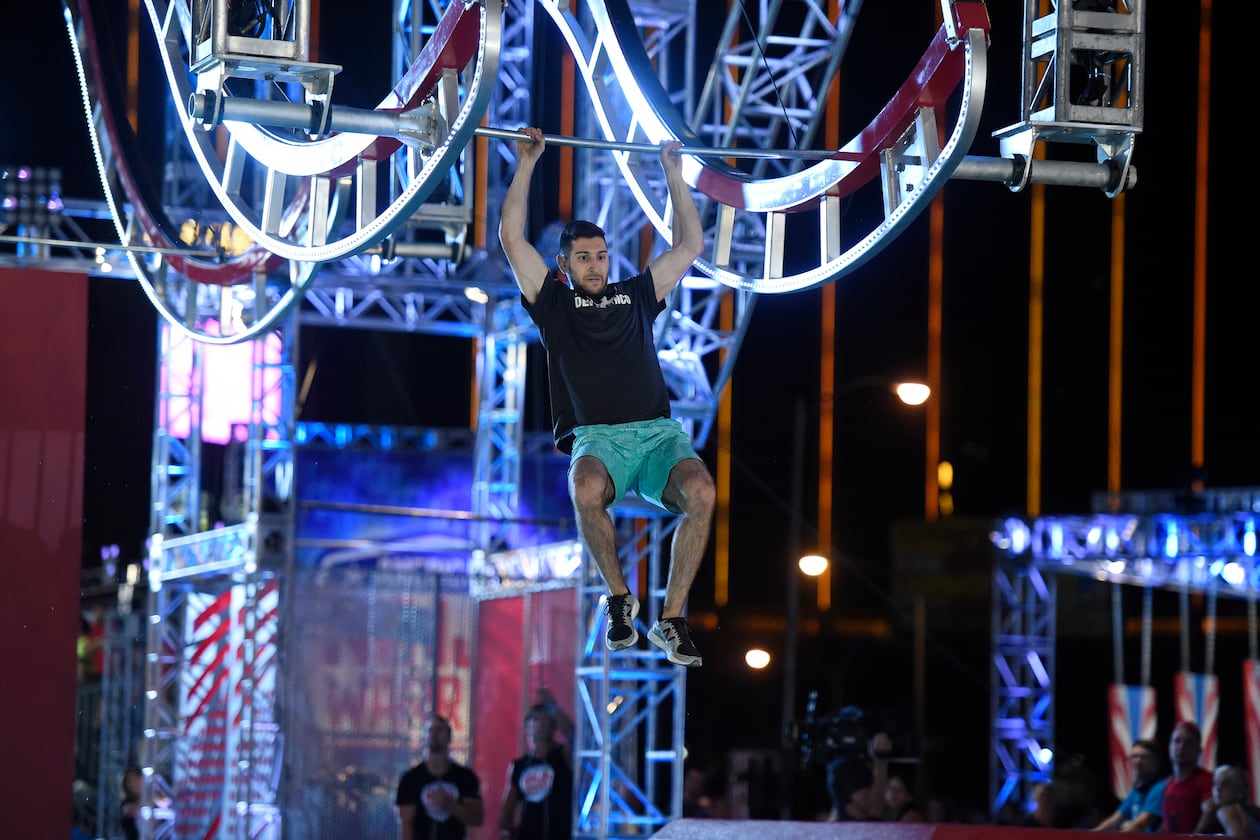 [Having completed the hard parts of the obstacle, Anthony Defranco eyes the landing pad, making sure he holds on long enough to reach it.]

Like I said, there is a lot that goes into clearing the Double Dipper, but for Finalists caliber ninjas, its hardly a Ninja Killer.