Just one episode remains in Season 9 of American Ninja Warrior. With a record 41 ninjas moving on to Stage 2 it is sure to be one action packed show! 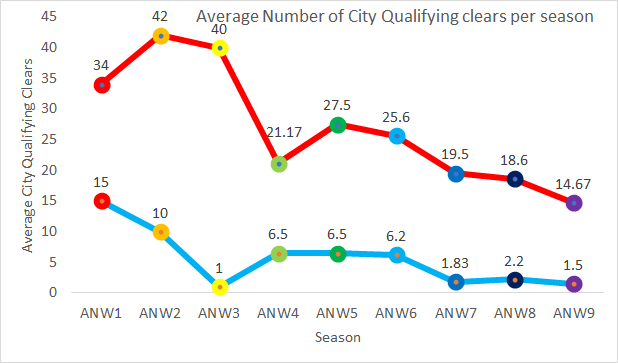 [Before Stage 1, there was every indication that this was the hardest season of American Ninja Warrior to date. Average clears per city are used to account for variation across cities, and calculated by taking total clears and dividing by the number of cities in a given season] 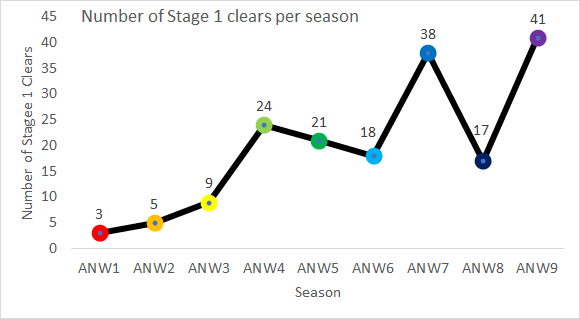 [This season we saw more Stage 1 clears than ever before. In Seasons 1-3 only 10 competitors took on the Finals, which explains their low clear rates.]

Despite that volatility, I think we can use that data (and a few more trends) to come up with a decent prediction as to how many competitors will complete Stage 2 this season. Much like the number of Stage 1 clears, the number of Stage 2 clears has varied pretty significantly in the past 3 seasons. Honestly, though this variation makes sense. In Season 6 when only 18 ninjas took on Stage 2, only 2 ninjas completed it. Similarly in Season 7, when 38 competitors took on Stage 2, we saw a record 8 ninjas complete it. 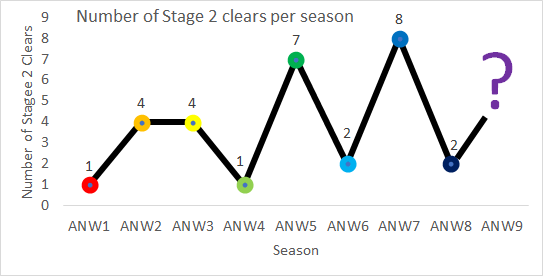 [The number of Stage 2 clears per season follows pretty similar spikes to those seen in the Stage 1 figure, for the past 3 seasons at least.] 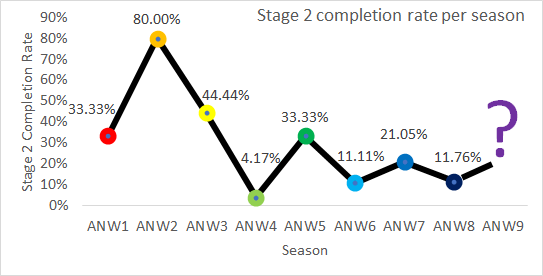 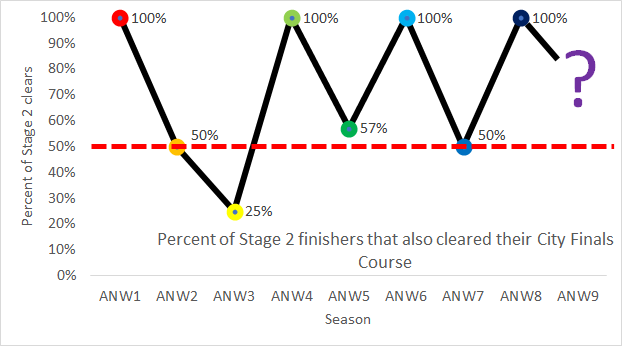 This year all 8 of the ninjas who cleared their City Finals and attempted Stage 1 completed it. (sorry Charlie Andrews, that head injury looked brutal, glad to hear you're doing much better now!). That means that 8 of the 41 ninjas taking on Stage 1 also completed their City Finals course. With that I would expect 50% or more the Stage 2 clears to come from those 8 competitors.

So to tie it all together, I expect to see between 5 and 9 Stage 2 clears. I also expect 3 or more of these men to clear to Stage 2: Josh Levin, Adam Rayl, Sean Bryan, Daniel Gil, Drew Drechsel, Jamie Rahn, Joe Moravsky, or Ian Dory. I would love to try and make predictions for Stage 3 and beyond, but the data is so scarce there (only 2 clears ever) I can't really do much.

At 5'1" Tyler Yamauchi became the shortest competitor to clear Stage 1. Funny because I believe his fellow "Windy City Warrior" Brandon Mears is the tallest competitor to complete the stage, although Travis Weinand may hold that distinction (I don't usually track heights).

At 5'0" Barclay Stockett is the shortest competitor to complete pretty much every obstacle on Stage 1, with the exception of the Flying Squirrel which she unfortunately didn't have time to attempt.

David Campbell makes his return to Stage 2 for the first time in 5 years. Many of the other Stage 2 finalists weren't old enough to compete on American Ninja Warrior 5 years ago.

3 Walk-ons reached Stage 2 this season. This is the first time (to my knowledge) more than 1 walk-on has ever reached Stage 2 in a season. Also these guys became the 5th, 6th, and 7th Walk-ons to ever complete Stage 1 (in a season they walked on) - For more on this one check out Dave's first hand account!