During each of the past two City Finals courses the last runner if the night was the only one to complete the whole thing. First it was Daniel Gil in San Antonio, then it was Drew Drechsel in Daytona. This is the second time there have been two City Finals in the same season with only 1 finisher. The other was Season 7 (though last year did have one city with 1 finisher and one with 0 finishers). And these were just the 5th and 6th times there was a lone finisher of a City Finals course. Further supporting my statement from a couple weeks ago that Season 9 is on pace to have the fewest City Finals clears ever.

After researching how many times the fastest City Qualifying finisher was also the fastest City Finals finisher I was curious how the other fastest finishers fared. From this point forward I will be using the words "place" and "seed" to describe a ninjas ranking among the others moving on to the next stage of competition. The ninja who goes the furthest the fastest receives place/seed 1, the ninja who goes the next furthest/fastest gets place/seed 2, and so on. 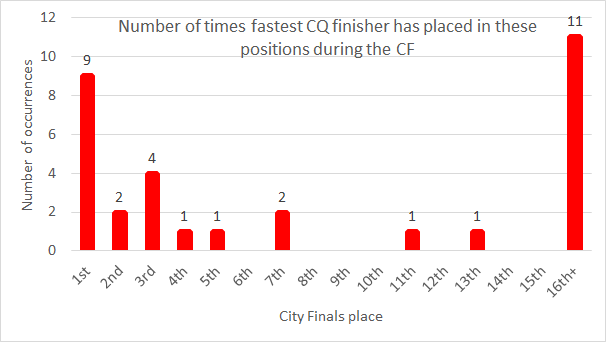 [The fates of the fastest City Qualifying finishers during City Finals.]

Unfortunately, I do not have complete data to determine if there is a positive trend between City Qualifying seed and City Finals seed. This data doesn't exist because the only way to definitely know what place a ninja got is when it is displayed on the graphics at the end of the episode, and those are only used for the ninjas moving on to the next stage. I can sorta work backwards though.

If we use City Finals place (for the 15 ninjas moving on to the National Finals) as our dependent variable, we can compare the average seeds of the City Qualifying finisher who achieved those City Finals places. I did this for all 32 City Qualifiers, if this is still unclear I've provided an example of one of the calculations at the bottom of this piece. 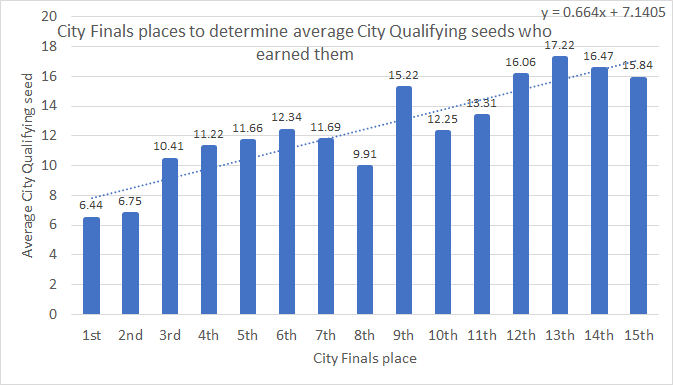 There is a clear positive correlation, suggesting higher City Finals finishers also had higher City Qualifying finishes. It is interesting to note how the 1st and 2nd place City Finals finishers are the furthest below the trend-line. Suggesting these places are filled by even lower seeds proportional to the rest of the line. Basically, ninjas who finish in one of the top two spots in the City Finals probably finished the City Qualifier with a pretty high seed. 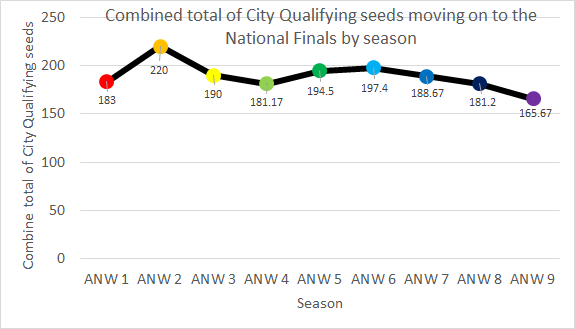 [By adding up the City Qualifying seeds of all the ninjas moving on the National Finals, and comparing these points across seasons we can determine if more of the faster City Finalists are moving on to Vegas.]

The season with the highest combined total of City Qualifying seeds ever was season 2, with 217 however, there were 3 individual courses which had higher combined total of City Qualifying seeds: Season 8 Oklahoma City - 220, Season 7 Kansas City - 226, Season 6 Miami - 266. Season 7 Kansas City and Season 6 Miami both had their numbers inflated since more than 30 ninjas finished the course, giving the opportunity for ninjas with seeds higher than 30 to qualify for the National Finals, which is obviously not always the case. A possible explanation for this trend is that the elite ninjas who return every season are distancing themselves from the rest of the field more and more every season. However, there's a lot of extrapolation required to get to that statement.

This week I brought some new manipulations of data that I had never messed around with before and found some interesting trend, it's always cool to see where the show is going. If these data manipulations can predict that even slightly its even cooler.

Noel Reyes finished the Season 6 Miami City Qualifier with the 37th fastest time, but went on to post the 7th fastest time in the City Finals, making him the ninja with the highest City Qualifying seed to ever qualify for the National Finals

Brendan Couvreux had the 35 fastest finish in the Season 7 Kansas City City Qualifier, and posted the 3rd fastest time in the City Finals. The difference between his City Qualifying place and City Finals place was 32 places, the largest difference ever.

The Daytona City Finals is the second time only 1 ninja qualified for the National Finals despite finishing higher than 20th in their City Qualifier.

On Average 3.5 ninjas who finish higher than 20th in the City Qualifier improve and qualify for the National Finals.

5 ninjas who completed their City Qualifying course but finished outside the top 30 (they moved on the City Finals because they finished) qualified for the National Finals.

I then added these places together, and got 206. I then took this number and divided by the number of courses evaluated, 32 and came up with the average City Qualifying Seed of the first place City Finals finisher - 6.44.