"Over the past 3 Seasons only Drew Drechsel has completed more obstacles than Daniel Gil." A stat given by Matt Iseman just before Daniel Gil took on the San Antonio City Finals and did this. I love when the show states a crazy stat like this. Now let's add even more context and numbers to this already crazy stat.

First off, just how many obstacles have Daniel and Drew completed in the past 3 seasons? And to clarify, Matt was counting seasons 7, 8 and the City Qualifying rounds of Season 9 - which is technically 2 and 1/6 seasons, but close enough. In that time span, Drew Drechsel completed 74 obstacles. Daniel Gil completed 64. Looking back at Iseman's wording "Only Drew Drechsel has completed more obstacles." Why not say "Daniel Gil has completed the second most obstacles?" Well because that second statement, is only partially true. Daniel Gil is actually tied with Joe Moravsky for the second most obstacles cleared in that time span.

[A table with the 5 ninjas who have completed the most obstacles over the past 3 seasons and how many obstacles they completed each season.]

Joe and Daniel's Season 7 and 8 were nearly identical only in the reverse order. With the exception of Brian Arnold, all these top ninjas completed their City Qualifiers, adding 6 more obstacles completed to their totals. Although Ian Dory had an early exit in the Las Vegas Finals in Season 8, he still makes the list thanks to his nearly perfect Season 7 where he cleared all but 2 obstacles: Stage 3's Flying Bar, and The Final Climb up Stage 4.

If the ninjas never failed an obstacle in the past 3 seasons they would have completed 83 obstacles. For the most part, the number of obstacles per course/stage doesn't change too much. City Qualifiers always have 6 (I know in Season 4 the Southeast and Northeast courses technically had the Wall Lift in the 6th slot and the Warped Wall in the 7th but the Wall Lift is an obstacle meant to add more time to run, so it literally made 0 sense on a course where time didn't matter so I'm ignoring it), City Finals have 10, Stage 2 has 6, and Stage 4 has 1. In Seasons 1-6 Stage 1 had NINE obstacles, then in Seasons 7 and 8 there were only EIGHT obstacles. Stage 3 has bounced back and forth between SEVEN or EIGHT obstacles; Seasons 2, 3, and 8 had SEVEN, while the rest had EIGHT.

[The number of possible obstacles on each course/stage and how they compare to recent and career ninja performances.]

Since that's a ton of numbers to take in all at once the graph above hopefully puts some visual context to the scale of these numbers. Drew's 3 season total is just 9 obstacles short of what 2 and 1/6 perfect seasons would be, completing 89% of the obstacles needed to be perfect. During his Perfect Season in Season 7 Geoff Britten completed 39 obstacles. In 8 full seasons of American Ninja Warrior no one has completed more obstacles than David Campbell, 170.

David has competed in each of the 8 previous seasons.Had he cleared every obstacle on ever course in every season he would have completed 315 obstacles (the Godfather is a great nickname, but had he done that he'd need an even better one). No one has cleared more obstacles than Campbell but even he is 145 obstacles short of a prefect career. He's only completed 53.97% of all the obstacles he needed to have a perfect season in every season he competed. 12 ninjas have completed more than 100 obstacles in competition.

[These ninjas have completed a lot of American Ninja Warrior Obstacles, this table breaks down how they got did it.]

Since this list is loaded with the legends of the show and doesn't necessarily reflect the "best" ninjas here's a table of the ninjas who have the highest average number of obstacles completed each season. 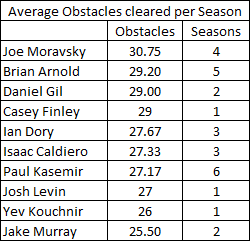 [The average numbers of obstacles ninjas have completed per season and how many full seasons they've competed in.]

Joe Moravsky obviously tops this list because his fewest obstacles completed in a season is 25, a number that has only been topped a few dozen times in the entire history of the show. Similarly, Brian Arnold has never completed fewer than 26 obstacles in a season, and does have that crazy 38 obstacle season when he went out on the Flying Bar in Season 5. Daniel Gil who as we saw in the first table is tied for the second most obstacles completed in the past 2 and 1/6th seasons, however, unlike Drew who has one early fall on his resume Daniel only has those two great seasons. For those curious the "one and dones" Casey Finely and Yev Kouchnir had their great seasons in Season 5. Where Casey reached the Roulette Cylinder on Stage 3 and Yev was flawless until the Double Salmon Ladder on Stage 2.

Obstacles cleared is a super cool way of looking at how successful ninjas have been. However, it's imperfect because it doesn't take into account completing stages or finishing with the fastest time of the course. Which is why I've added these as bonus points for the fantasy game at ANWFatnasy.com.

For a complete ranking of all ninjas aired in the first 8 Seasons check out the complete ninja stats section here. Even this system is imperfect in determining who the "best ninja in the sport is right now". However, I have some things I want to do to make such a ranking system so stay tuned for that!