In Season 7 the Hourglass Drop debuted in the Venice City Qualifier where it took out 26 ninjas during the episode (and probably many more which didn’t air). This gave it a completion percentage of 21.21% (7/33) the lowest completion percentage of any City Qualifying obstacle ever. The design was slightly different than the City Finals version, with ninjas moving along one hourglass shaped board dropping to the trampoline then back up to a wave shaped board.

In Season 8 the Hourglass Drop was moved to the City Finals but still tormented the Indianapolis City Finalists. Eliminating both the most ninjas of the night - 8, and having the lowest completion percentage of any obstacle on the course at 50% (8/16). This designed looked very similar to this year's (I think there was only an extra monkey bar added this year).

Hourglass Drop was again devastating this season, eliminating 18 ninjas, with a completion percentage of 25% (6/24). That's tied for the 7th lowest of any obstacles completed at least once on any stage! The 18 ninjas eliminated was 52.94% of all the ninjas who competed in the San Antonio City Finals.

On the surface Hourglass Drop really doesn’t look like too difficult of an obstacle. This year’s iteration had ninjas starting with some basic monkey barring, then hitting a trampoline, then doing an easier version of the Unstable Bridge. Monkey Bars, easy. Trampolines, not so much – but not 25% completion hard. Unstable Bridge, well that’s an entirely different story.

The Unstable Bridge is an extremely unique obstacle, with completion percentages ranging wildly. From 7.14% (1/14) in the City Finals of Season 3 (the lowest completion percentage of any obstacle completed at least once – I have heard the wind was actually playing a huge role in the difficulty this time) to 100% (5/5) on Stage 2 that same season.

Even still, the version of the Unstable Bridge which makes up the second half of Hourglass Drop is really not that difficult. It's anchored in the middle, limiting the amount of rotation and swing that the boards will undergo. It can be navigated effortlessly by most ninjas with several tiny basic laches to the same board or with a few big laches. 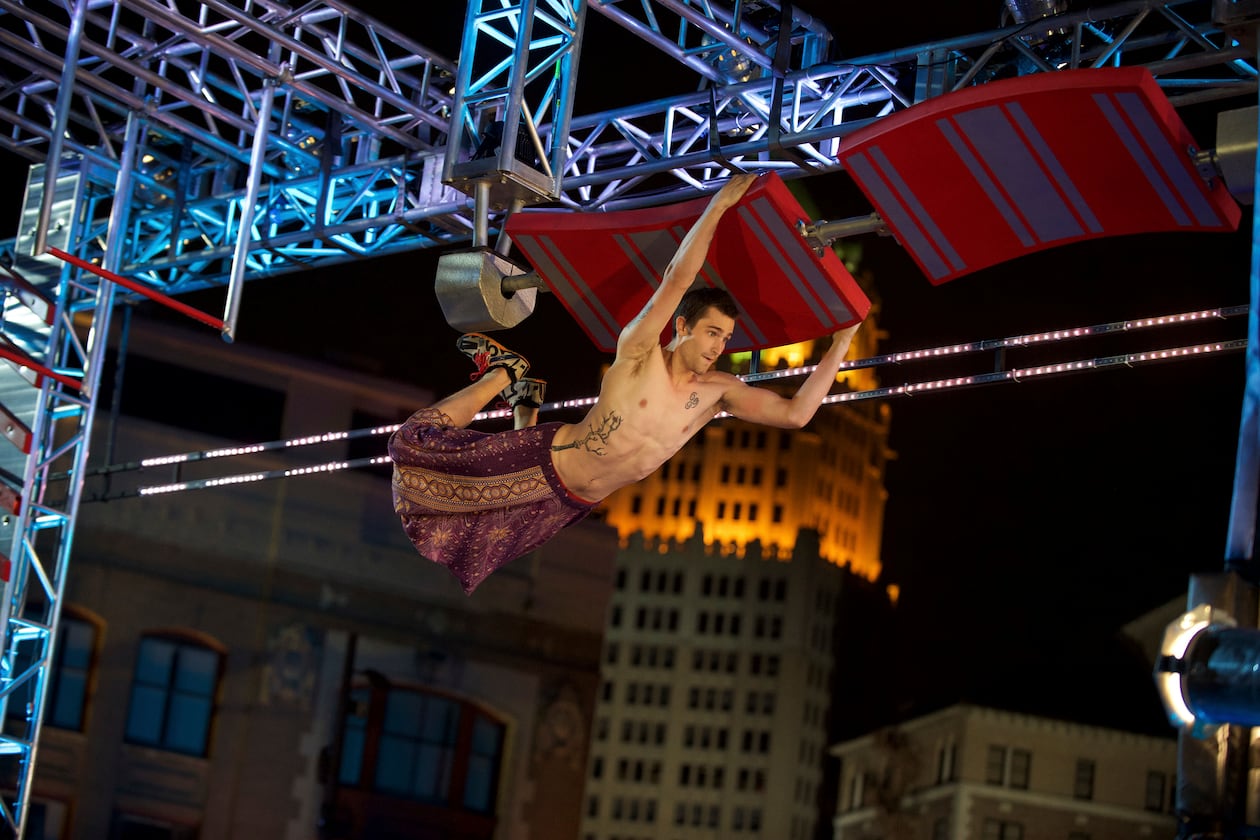 [Thomas Stillings got the Unstable Bridges about as crooked as they would go when he built up momentum to skip the second board entirely.]

The real Ninja Killer within Hourglass Drop is the dreaded trampoline drop, hence the name. Trampolines on their own can trip up even the most experienced ninjas. Controlling a trampoline drop from height is an entirely different story. While experiencing momentary free fall after letting go of the bar ninjas must do several things: Spot their landing, control their bodies, keep the core tight, and their legs locked.

The first two steps are to ensure the ninja hits the center of the trampoline with a small amount of forward momentum and gets the desired bounce, too far forward and the ninja is launched off the trampoline horizontally into the raised landing platform. Too far back or a complete lack of momentum will send the ninjas bouncing straight upward (even a little backwards if they’re really far back) making it impossible for them to reach the Unstable Bridge ahead of them.

The second two steps prevent the unfortunate knee buckling. Knees buckling is the bodies natural defense against falling. Knees buckle because of the bodies muscles, tendons and joints flexing upon impact. Basically think of it as way your body protects your important inside bits, much like the way cars are designed to crumple in accidents in a manner that will preserve the driver and passengers.

This buckling motion is great for preserving one’s body. It's the first step in absorbing impact and is an essential skill for parkour practitioners landing on hard surfaces, like concrete. However, a trampoline is a unique surface which unique concrete has "give" or springiness. As the ninjas compress the trampoline it will launch them upward an equal and opposite amount upwards (yay physics). Ninjas who are able to keep their core tight (basically flexing their many abs) and their knees locked (a slight bend is ideal, they want the angle of their legs to be between straight -180 degrees and completely bent – 90 degrees erring more towards the completely straight end of the spectrum) will reduce their bodies natural tendency to absorb impact by crumbling and receive a great bounce.

Hourglass Drop continues to be one of the hardest obstacles ever on American Ninja Warrior, because there is a lot that goes into that trampoline drop. Even if it sounds simple on paper, its definitely hard to but it all together while your free falling.