For the third week in a row, an obstacle made the list of the 10 obstacles with the lowest completion percentage (of obstacles completed at least once) in American Ninja Warrior history - Cleveland's Nail Clipper and Kansas City's Floating Monkey Bars. This includes all obstacles and all stages! For the second time this season, it was that obstacle's second appearance on said list - joining San Antonio's Hourglass Drop. I'm talking of course, about The Wedge.

[The most up to date ranking of the 11 most difficult obstacles (completed at least once) in terms of completion percentage.]

Last year the Wedge made it's American Ninja Warrior debut in the Los Angeles City Finals. At the time, its 11.11% completion rate was the second lowest in show history. Despite the extremely low clear rate the producers clearly like the obstacle, they introduced the Double Wedge onto Stage 2. Ninjas fared slightly better on the Double Wedge, clearing 33.33% of the time (2/6). This year's Denver City Finals version, was again super difficult, and now ranks as the 4th most difficult obstacle (completed at least once) with a completion percentage of just 18.75% (3/16). Surprisingly Denver's Wedge has the exact same number of attempts and clears as the Body Prop from Kansas City in Season 7. 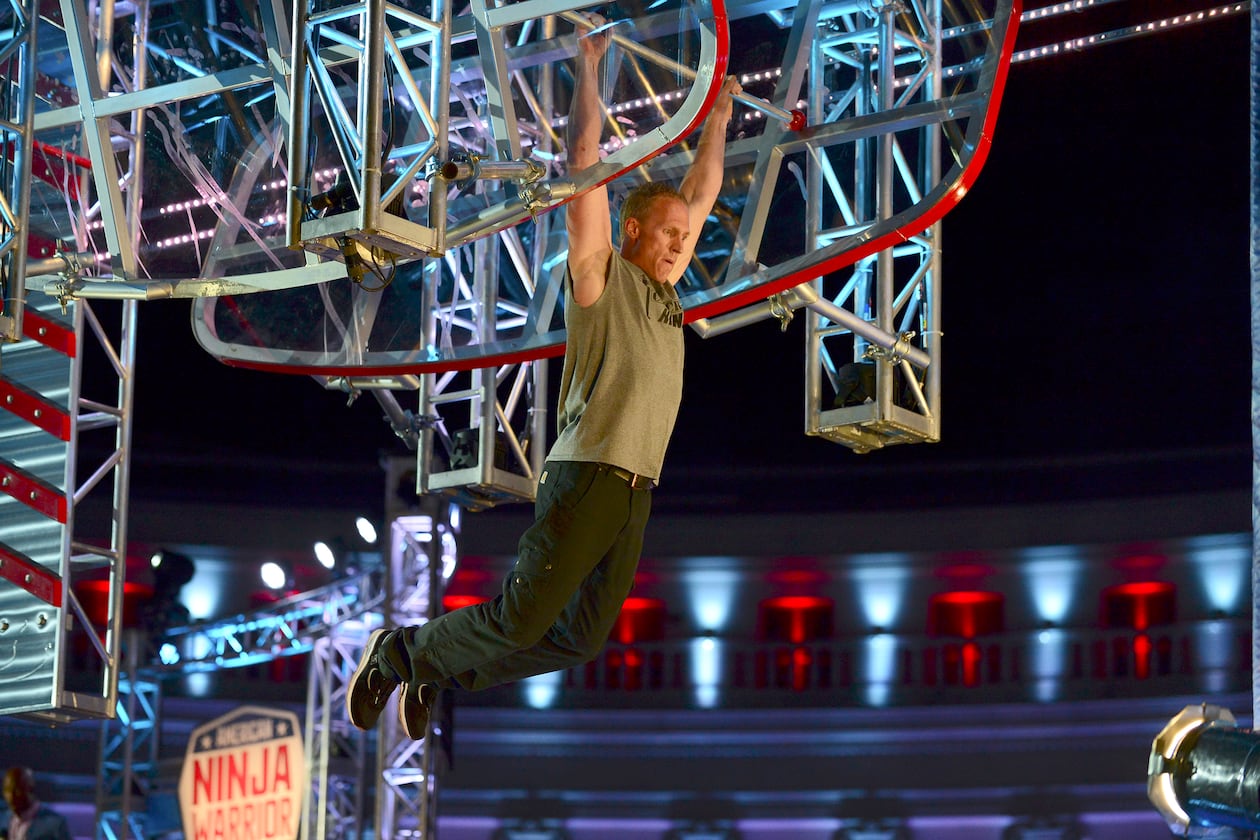 [Bart Copeland in a full dead-hang as he eyes the landing platform.]

The Wedge got covered pretty well last season. Alex Weber gave an awesome review of the obstacle's creation in his Crashing the Course video. Unfortunately, he didn't have a pro ninja there to show him how it was done, so instead he had David Charvet climb the Invisible Ladder. I touched on the technique needed to clear this Ninja Killer last season.

From what I could tell, the obstacle looked pretty similar to last season's. Although it did look like Ninjas were having a harder time moving the bar, and once they were in place there wasn't any worry about them simply sliding out. The ATS Team likely did some more tinkering with the balls at the end of the bar (last year it was lacrosse balls after testing 20+ different types of balls). This is further supported by Lorin Ball's comment, "it was really hard to move the bar." 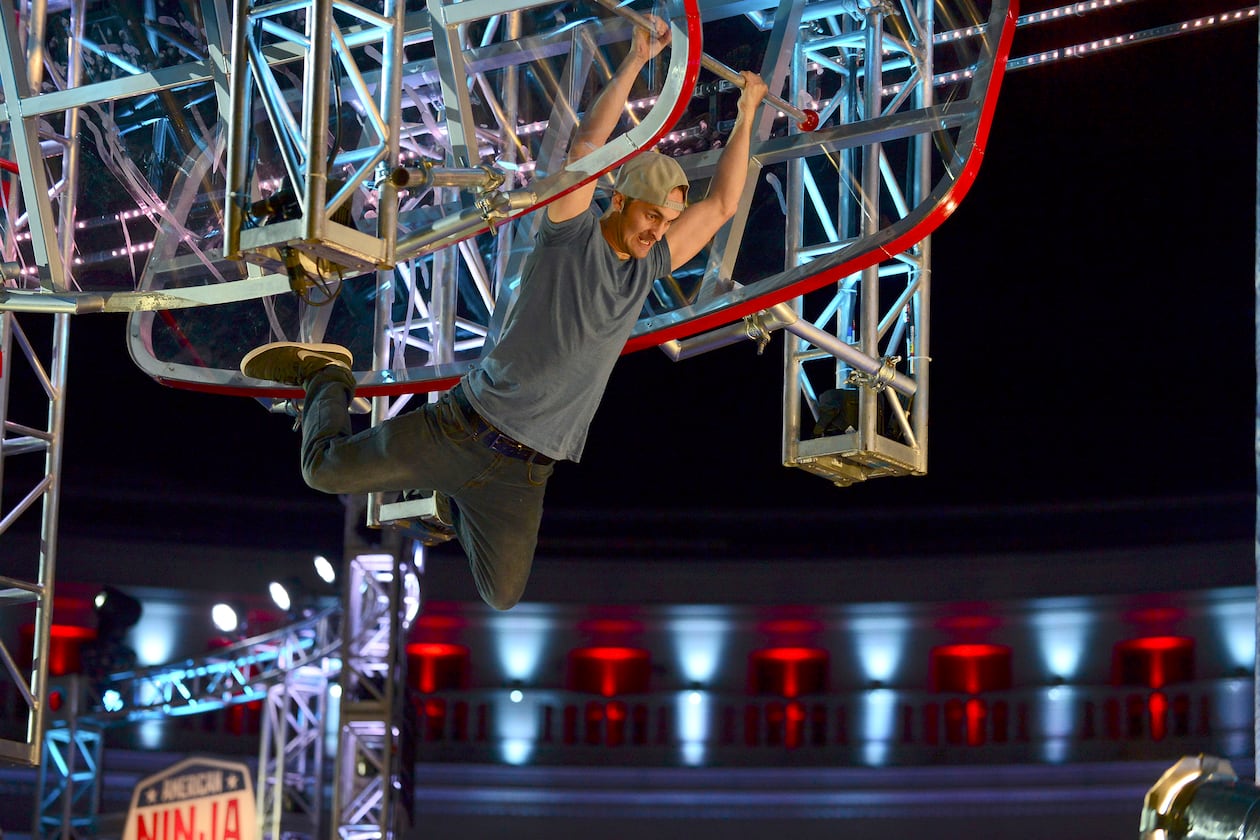 [Lorin Ball, fiercely build ups momentum for his lache off of the The Wedge.]

So in general the technique should be the same as last season. A series of controlled laches, this could be done either from dead hang (arms fully extended) - Lorin Ball's technique or locked-off (keeping the Ls) - Ian Dory's technique. However, unlike a traditional lache, competitors aren't letting go of the bar and grabbing another. Instead they need to keep their arms even and bring the bar with them. This can be a very difficult task just because there is a lot going on.

Landing in a lock-off is always advisable, to reduce impact of a lache (if you want to string multiple together landed extended allows for better continued momentum), and probably makes controlling your landing on the Wedge easier too. Since this year's version, was so "sticky" ninjas need to generate a lot more power with each controlled lache. The easiest way to do this is with a good lower body kip, here's a Crashing the Course explanation of that technique. A good strong kip and some confidence should allow ninjas to lache from near the end of the Wedge to the landing platform, roughly 8 feet away - not a huge lache.

The Ninjago Roll had a 33.33% (1/3) completion rate, and just looked brutal. The Wedge was the Ninja Killer in Denver, but just looking at the Ninjago Roll, I still don't even understand how Ian Dory even completed it! This obstacle is basically the Rumbling Dice and Rolling Thunder combined into one, and then put on a track, that has a gradual hill up and down.

[The Ninjago Roll is the first ever "sponsored" obstacle, and a physics nightmare.]

The Ninjago Roll itself weighs 150 lbs which already is as much if not more than some of the ninjas who attempted it. That means, in order to move it ninjas were basically pulling two times their body weight since they were hanging beneath the obstacle. On top of that, some of the rungs spun, making pulling the giant apparatus even harder. All that is difficult, but the part I don't understand the physics of is how Ian Dory was able to move that round object up a hill, and then control its momentum back down. This adds, extra gravity and friction forces to the equation that. The whole thing gets really complicated. All I can say is, well it's clearly possible because we saw it get completed. Had I not seen that I would have said, "it's impossible".