Following the Los Angles City Finals, where 4 ninjas cleared the course, it looked like we would have more City Finals clears than the past two seasons. However, we never saw more than 2 ninjas clear another City Finals course this season. The average of 1.5 clears per city is the lowest average since the split to multiple cities in Season 4. 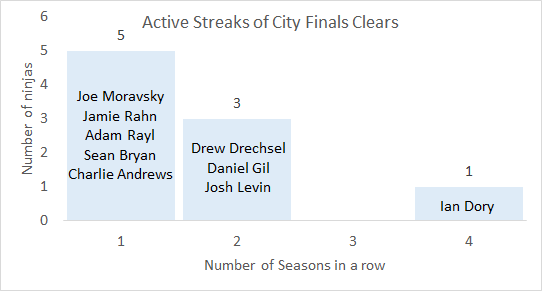 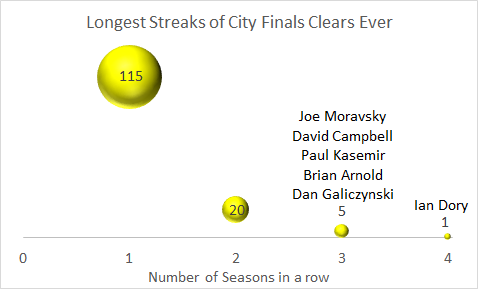 [All the City Finals clears and the streaks associated with them.]

Five ninjas strung together 3 straight seasons of clearing their City Finals course, but none of those are active streaks. This is a record that will stand for at least 2 more seasons, and even then only Drew, Daniel, and Josh could tie it. That is, if Ian doesn't extend it himself next year.

[One way to determine the difficulty of a season, is by the total number of buzzers hit. This figure only includes buzzers from City Qualifying and City Finals rounds.] 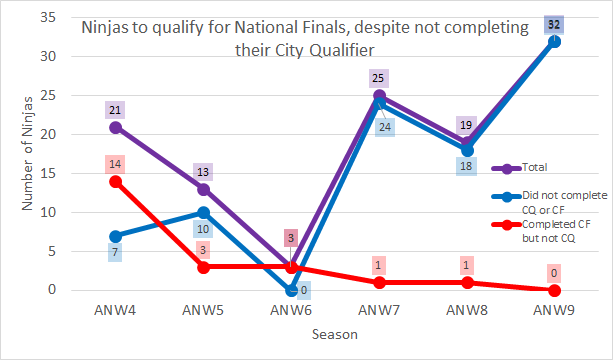 [All of the ninjas who failed to complete the Warped Wall in their City Qualfiers, but still advanced to the National Finals. This graph does include wild-cards, and if their National Finals run was aired.]

In order to display this stat properly I brought in another category. Although it didn't happen this season, in every other year of the "Modern era" at least one ninja has failed to complete their City Qualifier but gone on to complete their City Finals course. Last season it was Grant Clinton, and in Season 7 it was Jeremy Morgan.

In the first 3 seasons before the "Modern Era" every competitor who qualified for the City Finals completed the City Qualifying course, so those year's were not included. Although the trend is not as clear as you would expect, generally as the show has gone on the number of ninjas moving on to the National Finals who failed to complete their City Qualifier has increased. This season, 32 ninjas who failed to get up the Warped Wall in qualifying are moving on the National Finals. A testament to just how difficult this year's "City" courses were.

Meagan Martin cleared the Warped Wall for the 5th time in competition, the most among the women. Jessie Graff has cleared 4, Jesse Labreck has cleared 3, Kacy Catanzaro and Allyssa Beird have each cleared 2.

Brian Arnold managed to hit some part of his head on Rail Runner during both of his runs. He broke his nose in qualifying and bumped the back of his head on it during the City Finals.

In the four years since Brian Arnold reached the Flying Bar, the obstacle has only been attempted 3 other times, all three in Season 7. Two were completions: Isaac Caldiero, and Geoff Britten, Ian Dory failed to complete it.

Lorin Ball has attempted 125 obstacles on American Ninja Warrior, 11th most all time. Even with that pedigree he said the Ninjago roll was, "By far the toughest obstacle he's been on, on the show".

Jesse Lucero fell on the Floating Steps last season, this season he waited 29 days in the Walk-on line and has already completed 12 obstacles this season, with a chance to complete even more!