The Kansas City Finals are the second American Ninja Warrior City Final course to feature 0 clears. Everything about the course was brutal. Literally only 2 obstacles failed to eliminate a ninja during the City Finals, the Hang Glider and the Warped Wall. Even the floating steps took out a City Finalists - that's only the 3rd City Finalists taken out by the steps all season!

For the second time in history, the ninja with the fastest time to the 5th obstacle qualified for the National Finals. This means they didn't even have to clear the Warped Wall to make it to Las Vegas. The Broken Pipes alone eliminated 8 City Finalists, including some of the most experienced ninjas in the field. In San Antonio, the entire "front-half" (the 6 obstacles the ninjas faced in the City Qualifying) only eliminated 7 City Finalists. Just like in qualifying, Crank it up and Bar Hop also took out a ton of ninjas.

14 ninjas reached the back half of course, unfortunately 5 were done in by the 7th obstacle staple, the Salmon Ladder. That means that only 9 Ninjas took on the new City Finals obstacles. The Floating Monkey Bars sat in the 8th spot, and per usual, they were no joke. The Floating Monkey Bars made their debut in the Season 7 Pittsburgh City Finals where they were that course's Ninja Killer, with a completion percentage of 43.75% (7/16). The obstacle returned last season in Atlanta where they were again the Ninja Killer, with the surprisingly the same completion percentage 43.75% (7/16). 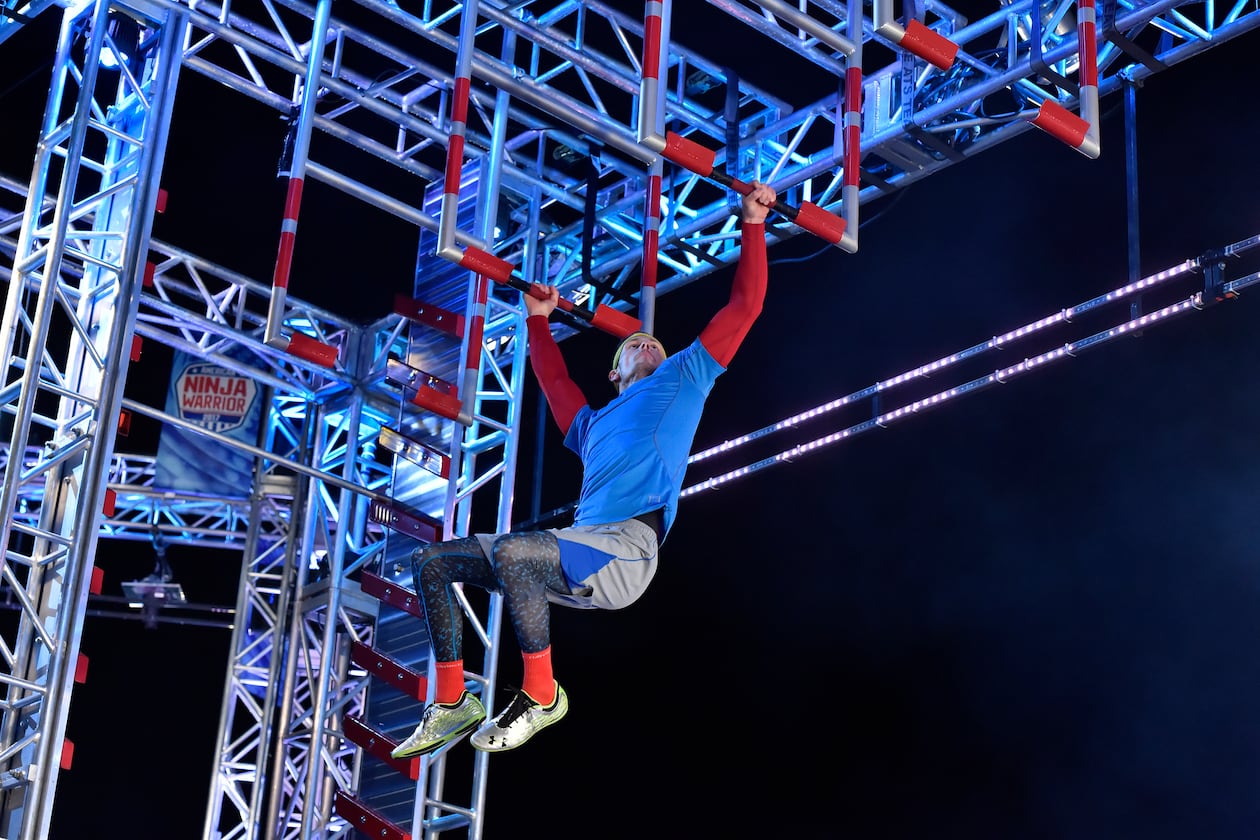 [Jeremiah Morgan has reached Stage 3 before, but the "front half" of the Kansas City Course was too draining and this experienced ninja was taken down by them this season.]

[The current list of the 10 obstacle completed at least once with the lowest completion percentage. If this figure looks familiar, that's because it seems like every week an obstacle is making this list!]

Iron Maiden was another crazy take on a pegboard, however, unlike the Swinging Pegboard in Los Angeles, this one didn't seem too difficult. It had a 50% completion rate but only 2 ninjas attempted it. Mitch Vedepo looked gassed before he started the obstacle and then breezed right through it. Tyler Yamauchi looked strong the whole time and just had the unfortunate mishap of the receiver sliding off as he went for the dismount. Tyler even said, "I wasn't even pumped yet though, I was going to finish," after climbing out the water and receiving his towel of shame.

Despite the Floating Monkey Bars having the 8th lowest completion percentage of obstacles completed at least once, there was an obstacle in Kansas City with an even lower completion percentage. The Elevator Climb in Kansas City had a 0% completion rate. In Philadelphia last season the Invisible Ladder was added to the yearly (with the exception of Season 7) list of obstacle with 0 clears. Last season, both the Philadelphia City Finals Invisible Ladder and the Stage 3 Hang Climb had 0 clears. Unless we crown another American Ninja Warrior champion this season, there will be at least 2 obstacles that were not cleared at least once.

For the first four seasons of American Ninja Warrior the 10th City Finals obstacle was the Rope Ladder. An unfail-able time consuming climb up a massive cargo net, completed all 111 times someone faced it. In Seasons 5 and 6 the 10th obstacle was the Spider Climb, another relatively gimme of obstacle (when time isn't a factor) meant to symbolize the historic final climb in Sasuke, it had a completion percentage of 91.9% (57/62). Season 7 and 8 saw the Invisible Ladder, a completely new take on the 10th obstacle. Invisible Ladder was a brutal 30 foot endurance climb which taxed nearly every muscle in the ninjas already exhausted bodies, its completion rate was 64.71% (22/34). This season we were introduced to the Elevator Climb which has the lowest completion rate of the 10th obstacle yet, 47.06% (8/17).

[The evolution of the 10th American Ninja Warrior City Finals obstacle over time.]

The Elevator Climb and the Invisible Ladder are extremely similar obstacles, in both technique and in practice. The biggest difference between the two being the hand placement required. Elevator Climb forces ninjas into either a overhand, palms out, grip or a underhand palms in grip. Technically the popular mixed grip could be used in theory, however, no one has used it yet this season. The rings of the Invisible Ladder allowed the competitors to use whatever grip they were most comfortable with, which was generally a neutral grip, palms facing each other. Also rings are a little more form fitting to a hand than a flat bar.

There are a number of different techniques to get through these endurance climbing obstacles. Using as much of the body as possible is always key. Starting from a dead hang ninjas should explode with their lower body to get into the highest pull-up possible, arms making Ls or even more acute angles. From there, extending one arm as high as possible, then pull down once the arm has reached as far as possible. This should mean the ninja is making L or an even more acute angle with their raised arm. Pulling as hard as they can downward with their leading arm, should make raising their trailing arm easier, allowing them to push beyond the other, resulting in a new leading arm. 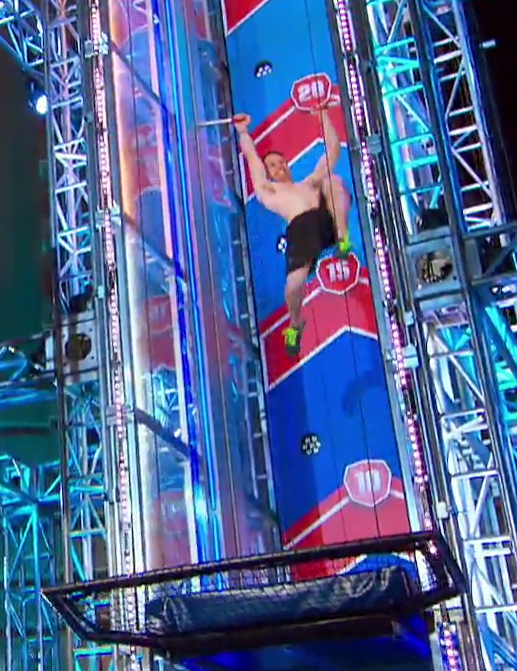 [Mitch VeDepo had a great rhythm and good lower body control, driving his knee upwards as he pushed his arms up but the Elevator was just too tall.]

This process of pushing up one arm, while pulling downward with the opposite while working the lower body in a similar rhythm is how ninjas made the most progress at one time. The only problem is those are taxing moves, and ninjas have to travel 30 feet up, at a foot per move, that's 30 moves, each of which is essentially an explosive pull-up. That's a lot of pull-ups after doing 9 other obstacles! Some ninjas were able to move the rungs/rings a little with small movements and lower body kips, but those were desperation strategies after the running out of energy to execute the initial plan. Which is why the Elevator Climb is a true Ninja Killer of a 10th obstacle.