There are two ways to get a chance to compete on American Ninja Warrior. To submit an application and receive the official call from the show letting you know that they would like you to compete (often referred to as THE CALL), or competing as a Walk-on. Walk-ons are dedicated ninjas, who often camp outside for weeks, just for a chance to compete on the show. Every year every city features roughly 100 ninjas who received THE CALL and a few Walk-ons. The number of Walk-ons is always uncertain, even at the start of filming the producers don't know if they will run 1, 5, or 25 Walk-ons. That number is determined by a number of factors, but mostly it comes down to time (it takes a long time to film all of the competitors who received THE CALL). 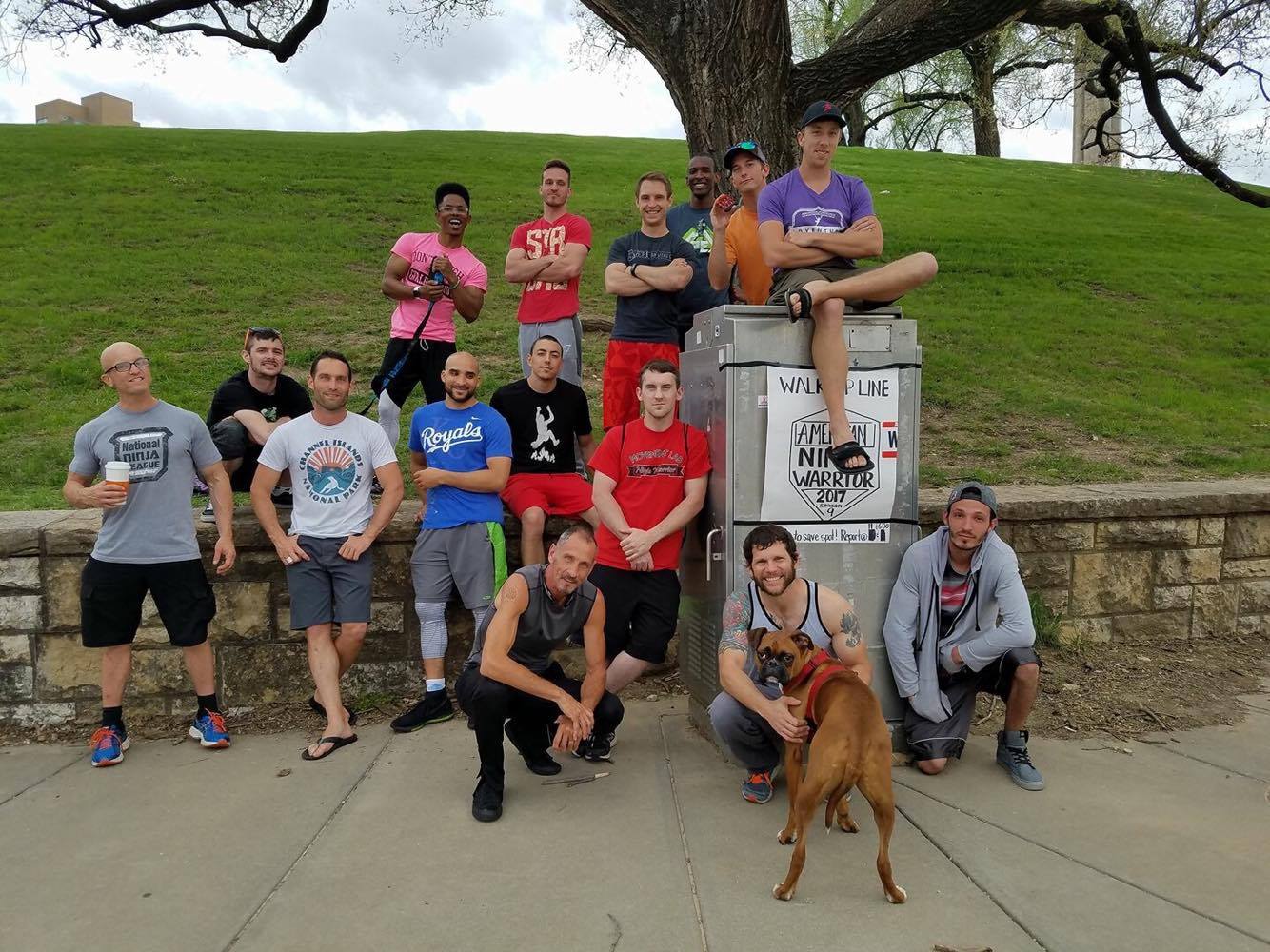 [An early picture of the Kansas City Walk-on Line. Alex Carson started the line 19 days before the filming of the City Qualifier.]

I personally have never participated in an American Ninja Warrior Walk-on Line so I don't want to speak to the full experience that it is. However, I do know many ninjas who have gone through the process. Although no one wants to have to wait in the Walk-on Line (because there is always an uncertainty about actually getting a chance to run, and you're away from your home and family for a long time) most people have a very positive take on their time in "the line". Spending multiple weeks with people of shared interest is a great way to make new lifelong friendships - but like I said I can't speak to that experience so that's all I want to say about it. 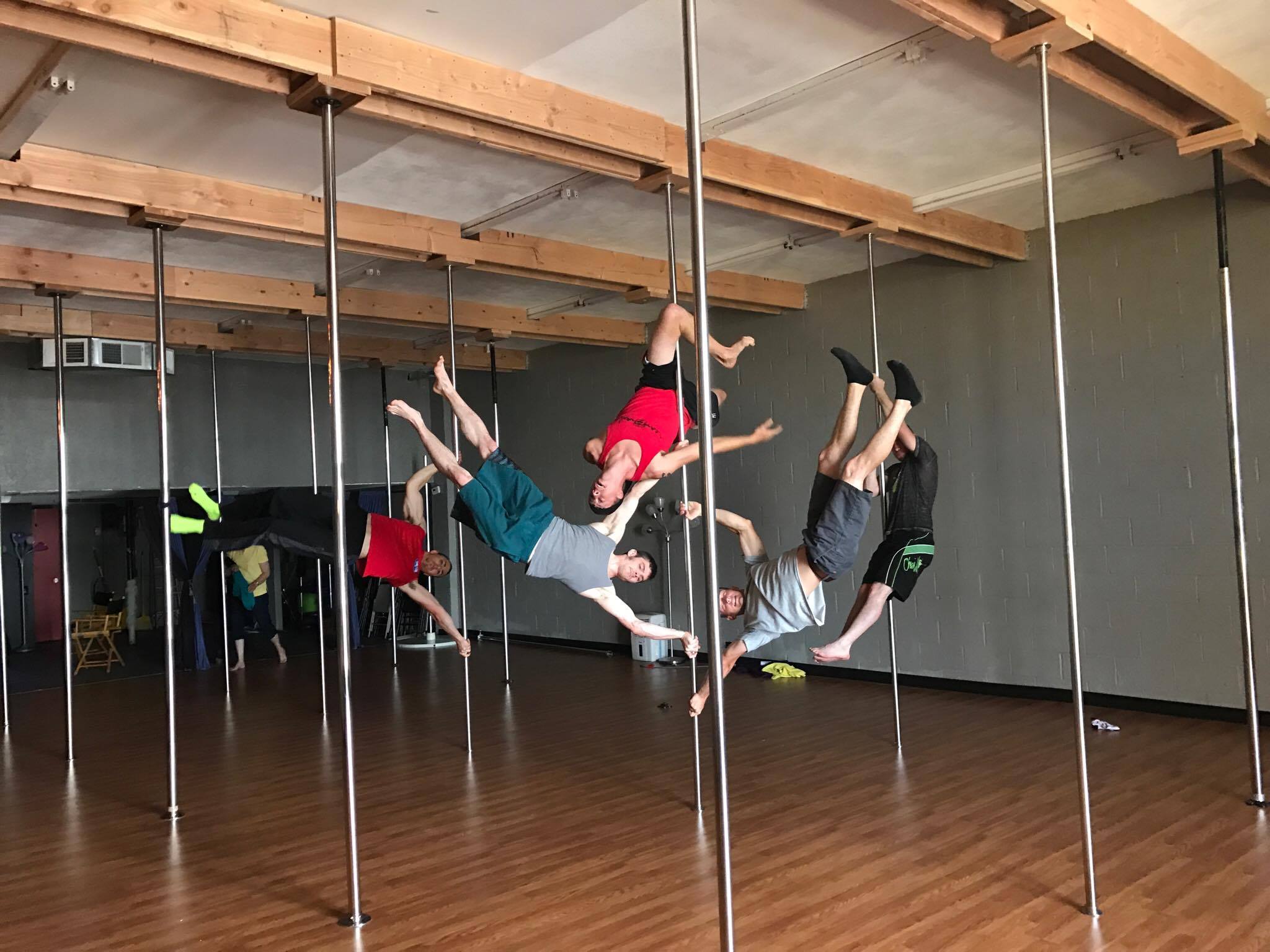 [Some of the Kansas City Walk-ons, "hanging out" and taking a "pole-yoga" class.]

This year, thanks to Nikki Lee's unofficial eye witness notes which resulted in the awesome, "What you didn't see" series, for the first time ever we are able to look into some Walk-on stats. Please regard this disclaimer as it is the unofficial context which I have used for all of this week's stats.

This year, 657 different competitors took on City Qualifying courses. 567 received THE CALL, 90 were Walk-ons. That means 13.7% of all competitors this season were walk-ons. Below are the breakdowns by city 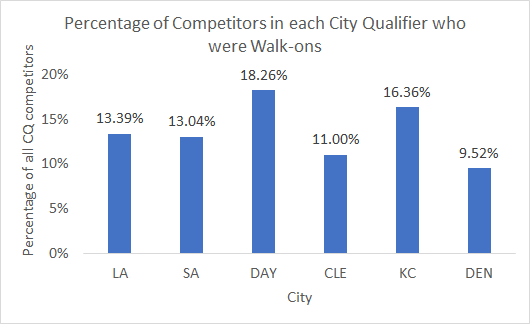 [It is interesting to see how the percentage of total City Qualifier runs were by Walk-ons varried by city. 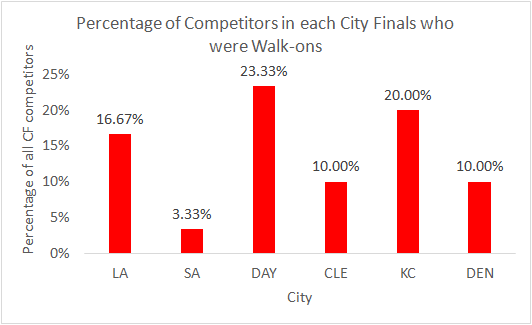 [Since there was not more than 30 City Finalists in a city this season, this graph was created by taking the number of Walk-on City Finalists per city and dividing by 30. - the women's rule was not in play here since no women walk-ons qualified for City Finals.]

The 6 Walk-ons from Kansas City: Mitch Vedepo, Dave Cavanagh, Jelani Allen, Alex Carson, Ben Baker and Donovan Metoyer did something special in the City Finals. Each of them went far enough fast enough to qualify for the National Finals. Now I don't know if 6 Walk-ons going to Las Vegas is a record because I've never had access to Walk-on data before this season (and again this is just based on Nikki's eye witness notes) but it certainty is impressive. That means 40% (6/15) of the National Finalists from Kansas City were Walk-ons. That's twice the next highest city, Daytona with 20% of their National Finalists being Walk-ons. For more comparison, in the other 4 City Finals this season combined there have only been 6 Walk-ons qualify for the National Finals. 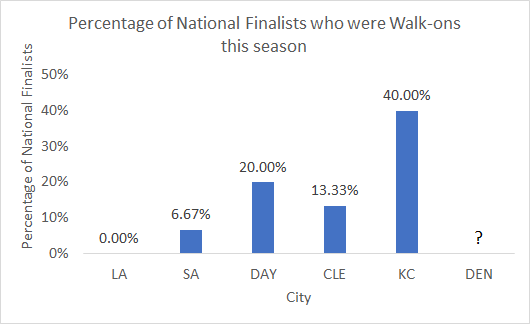 [These precentages were calculated by taking the number of Walk-ons who qualified for the National Finals and dividing by 15. We do not have data for the two Denver Walk-ons yet.]

The fact that 100% of the Walk-ons who attempted the City Finals course went far enough fast enough on is also impressive. However, our sample size is too small and looking at percentages this way is probably misleading. Especially since the San Antonio Walk-ons also had 100% of those who qualified for City Finals go far enough fast enough to make National Finals, although that's a truly small sample size, n = 1. 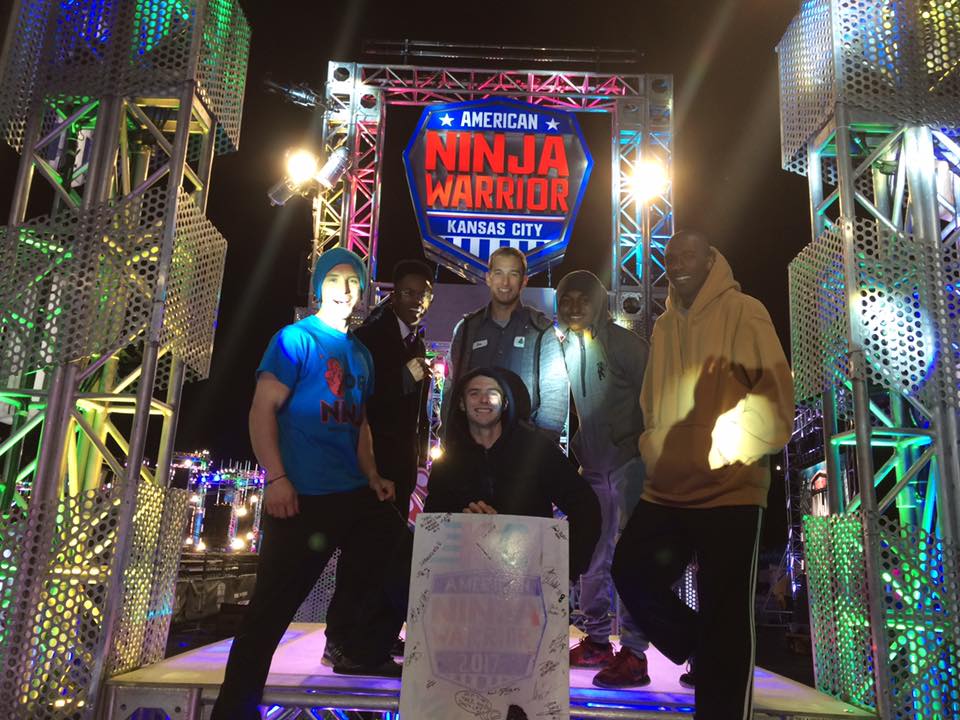 [The six Kansas City Walk-ons who qualified for the National Finals pose together at the start of the KC course.]

Walk-ons have been a part of every season on American Ninja Warrior. Some of today's biggest stars got their starts as Walk-ons including Kevin Bull, James McGrath, and even the first ever American Ninja Warrior Champion, Isaac Caldiero, who not only was a Walk-on in Season 5 but was also a costumed competitor (he ran as Nin-Jesus). Maybe the next big name ninja will be one of the Kansas City Walk-on moving to the National Finals or one of the other.

Instead of Bonus stats this week I figured I'd just make tables showing how all the Walk-ons have done this season. 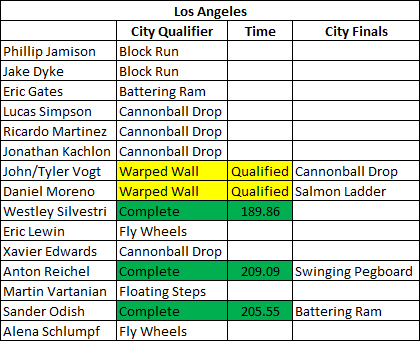 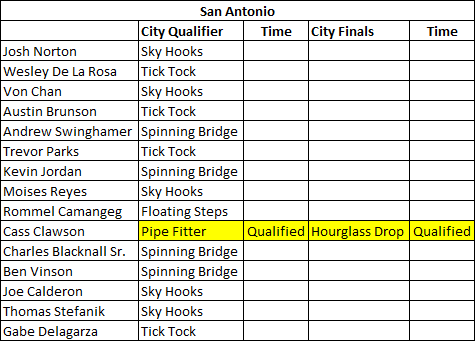 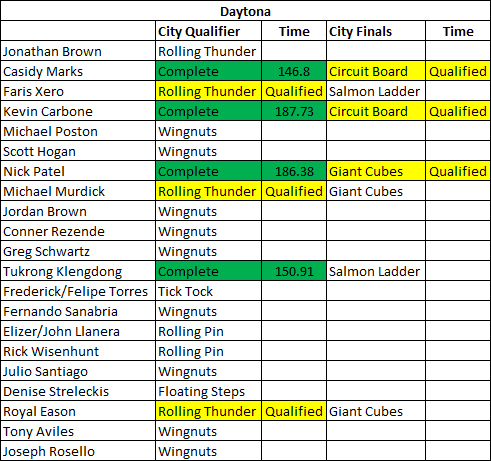 The Daytona Walk-on line formed the earliest this season, 30 days before filming. The creator of the line Johnathan Brown actually said he would give up his spot in line if anyone could beat him at a 50 foot rope climb. 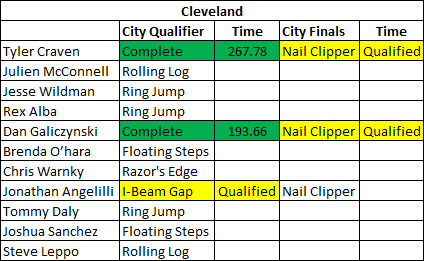 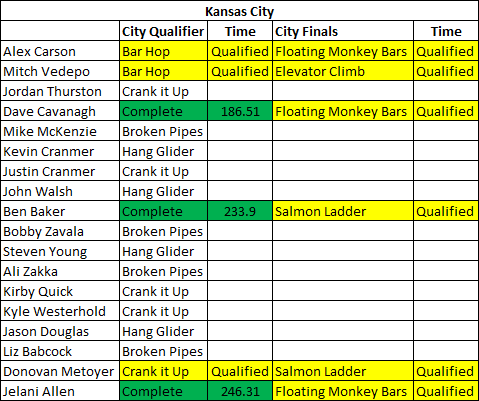 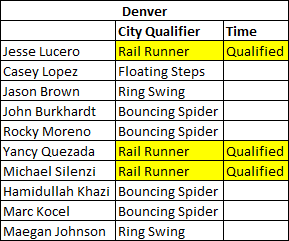 We will see how these three do in the City Finals next week!

Huge thanks to Donovan Metoyer for the awesome pictures of the 6 KC Finalists, Nikki Lee for all the results, and Dave Cavanagh for giving me the idea for this article and answering any questions about their line I had!