As I've mentioned in the past, the average number of City Finals clears since Season 4 has generally decreased. Season 7 was especially low, but Season 8, and now Season 9 (4/6 of the way through) appear to be trending toward a similarly low average number of finishers per City Finals. 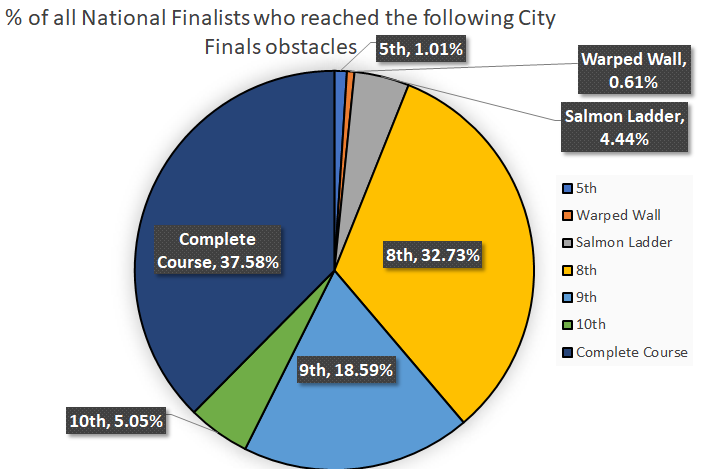 [A complete breakdown of the City Finals result of all 495 National Finalists in 33 previous City Finals courses.]

This table takes into account every competitor in the history of American Ninja Warrior who qualified for the National Finals by placing in the top 15 of their City Final's course. This does not include any wildcards, or any women who qualified according to this seasons new rule. Obviously, the figure also only describes the furthest obstacle ninjas reached in the City Finals, as those who completed the course, cleared all the other obstacles as well. The second most common City Finals result for National Finalists is failing to complete the 8th obstacle, coming in at 32.73%.

[Failing the 8th City Finals obstacle is the second most common result of National Finalists, this figure shows on average how many ninjas have qualified despite failing the 8th on a per City Finals course basis.]

So far this season, an average of 8.5 competitors per City Finals has qualified for the National Finals despite failing to complete at least the 8th obstacle. This figure includes all results of competitors failing to complete the 8th or an earlier obstacle. It is not quite an inverse of the previous graph, because of the 23.64% of ninjas who reached the 9th or 10th City Finals obstacles during their trips to the National Finals. This 23.64% is spaced out differently throughout the season, explaining the lack a true inversion. 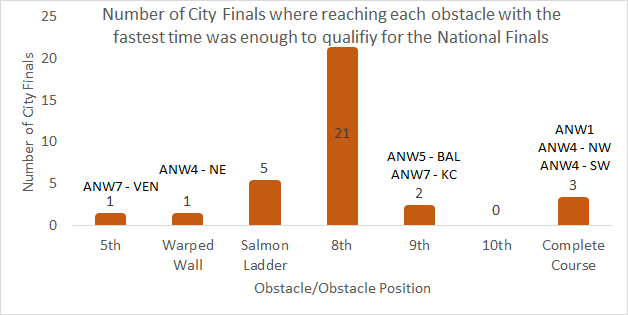 The fact that it was only possible to qualify for the National Finals from the 5th obstacle and the Warped Wall once, is why they made up such small percentages in the pie chart shown earlier.

This is the second season in a row where 3 women have finished inside the top 15 of City Finals. Jesse Labreck joins Jessie Graff, and Barclay Stockett earlier this season, and there are still two more City Finals yet to run.

Since first appearing on the show in Season 5, this will be the first time we do not see Michelle Warnky in the National Finals. It just won't be the same without her.