The Kansas City City Qualifier had the third lowest number of completions, 10, of any City Qualifying course in American Ninja Warrior history. Unlike the two courses which featured lower completions, Venice Beach in Season 7 and Philadelphia in Season 8, there was not one obstacle which took out a record number of ninjas. One thing which happened in Kansas City but not Venice in Season 7 or Philly in Season 8 was that the 5 ninjas who reached the fourth obstacle, Crank It Up, fastest was enough to move on to the Kansas City City Finals. 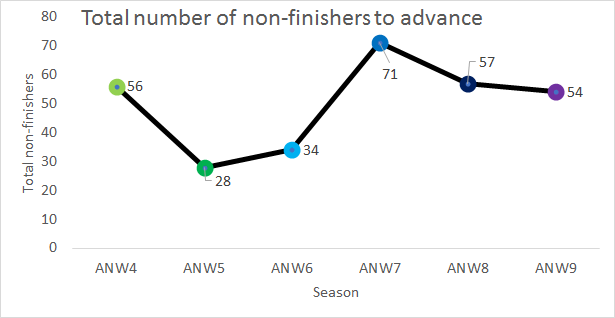 [Every season since season 4, some ninjas have failed to complete their City Qualifying course and advanced to the City Finals. This graph shows how many times that has happened each season.]

As you can see in the graph above the total number of ninjas who failed to complete their City Qualifiers but still advanced to the City Finals has generally increased throughout the past 5 seasons. There are a couple outlier data points like season 4 which was unusually high for its time and last season which was surprisingly low. A more fair graph would be to look at the average number of ninjas who failed to complete a City Qualifier but still advanced the City Finals. 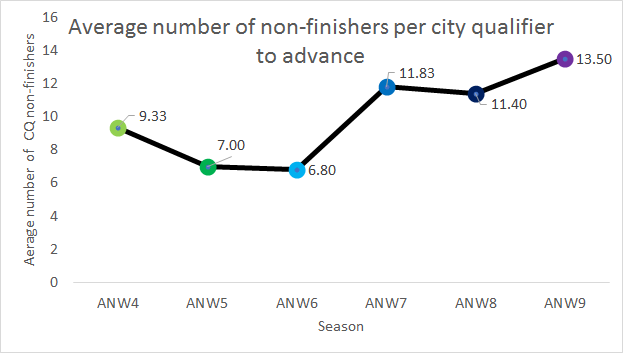 [The previous figure does not take into account the varying number of City Qualifiers per season.]

This levels out the data since different seasons featured different numbers of City Qualifiers: Seasons 4 and 7 had six, Seasons 5 (and 9 so far) had four, and Seasons 6 and 8 had five. Although the growths and declines are less extreme in this graph the general trend of more ninjas who failed to complete their City Qualifying course advancing to the City Finals is even more pronounced. With this season already trending to have the most City Finalists who failed to complete their City Qualifier.

The inverse to this figure (basically - when more than 30 ninjas finish a City Qualifier its not a true inverse) is the average number of City Qualifying finishers per season. Which as you can imagine, has decreased each season with the exception of Season 4, which was a truly low outlier. Season 4 was the first year of multiple City Qualifiers and it makes some sense that the difficulty of the City Qualifiers wasn't quite honed in as much as the producers would have liked. 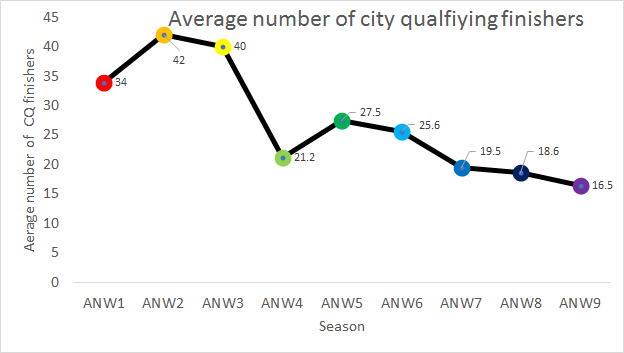 With an average of just 16.5 finishers for each of the 4 City Qualifiers this season, we are looking at the lowest average number of City Qualifying finishers ever.

This data can also be represented as a ratio, City Qualifying completions: total City Finalists. We can display this ratio as a percentage, and then graph it. 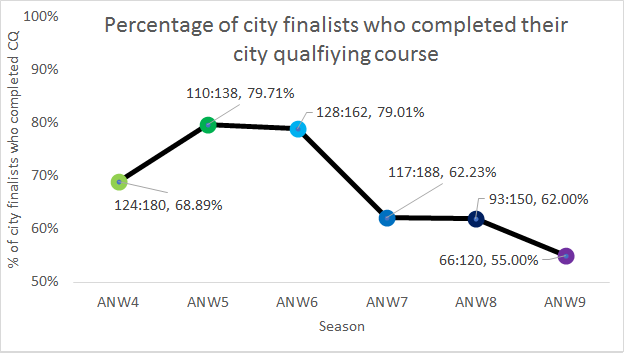 [This graph is another way of showing the how many City Finalists are completing their City Qualifying courses.]

So far this season barely over half, 55%, of the all City Finalists completed their City Qualifier. This is the first time that ratio has ever dropped below 60%. 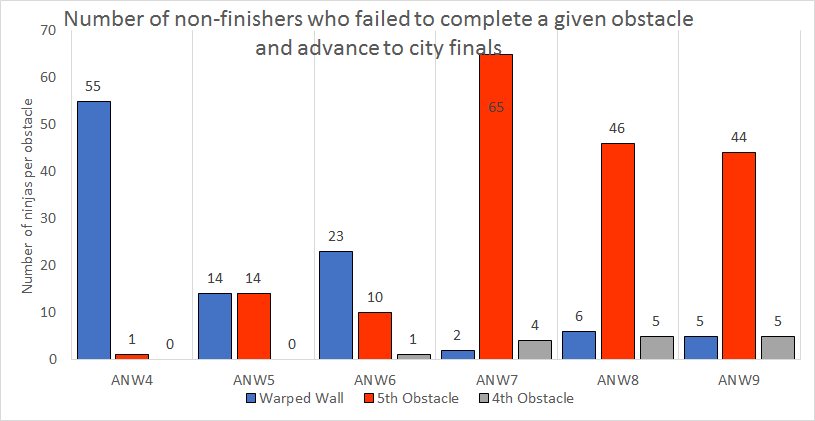 [This graph shows how many ninjas failed to complete a given position of obstacle and still advanced to the City Finals.]

As you can see in the figure above, in the past three seasons, a vast majority of the ninjas who failed to complete their City Qualifier but still advanced to the City Finals were taken out by their courses 5th obstacle. This is a dramatic shift from the previous 3 seasons which saw many more ninjas taken out by the Warped Wall.

An interesting side note in this tale about failing City Qualifying courses but advancing to the City Finals is the Warped Wall. 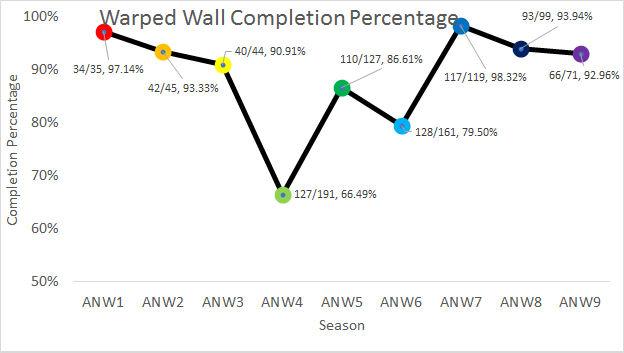 [The Warped Wall has been a part of American Ninja Warrior since Season 1, here are it's completion percentages through the years.]

The Warped Wall is one of (if not the) most iconic obstacles on American Ninja Warrior, yet its never really been a "Ninja Killer". Season 4 was its deadliest year, but even then 66.49% of ninjas who attempted it completed it. Last year, the height was increased by 6 inches which did slightly lower its completion percentage from nearly unfailable, 98.32%, in Season 7 to 93.94% in Season 8, with this season trending to be slightly lower yet.

What it takes to qualify for a City Finals course has varied dramatically over the years, in Seasons 1-3 you not only had to finish the course, but you had to do so quickly. In season 4 getting to the Warped Wall was often good enough. Starting in Season 5, some lucky ninjas were able to qualify simply by getting to the 5th obstacle fast enough. In Season 6, one lucky ninja (Quoc-Hoan Do) qualified because he was the fastest ninja to the fourth obstacle. Every year since a small handful of ninjas have qualified the same way, but starting in Season 7, reaching the 5th obstacle with a good time often became enough to qualify for the city finals.