In Kansas City there was no one obstacle which claimed a record breaking or even record threatening number of ninjas. Instead, 3 obstacles combined to take out over 68% of the field (68.4% if we use aired/annotated runs, 73.64% if we use all runs according to Nikki Lee's "What you didn't see" article). This is the second time already this season where a single City Qualifier had not 1, not 2, but 3 roughly equal Ninja Killers. In San Antonio Tick Tock, Sky Hooks, and Pipe Fitter similarly combined to eliminate 71.3% of the entire field.

The first Ninja Killer the Kansas City ninjas had to face was the Broken Pipes. The Broken Pipes had a 76.47% completion rate (39/51 for the aired/annotated runs or 64.52%, 60/93 for all the runs) the lowest we've seen in some time. Last season, the balance obstacle which claimed the most ninjas was the Log Runner in Oklahoma City, which had a completion percentage of 78% (36/46), Season 7's balance obstacle Ninja Killer was Snake Crossing in Pittsburgh which had a completion percentage of 75.76% and still haunts the dreams of some of the show's best competitors. 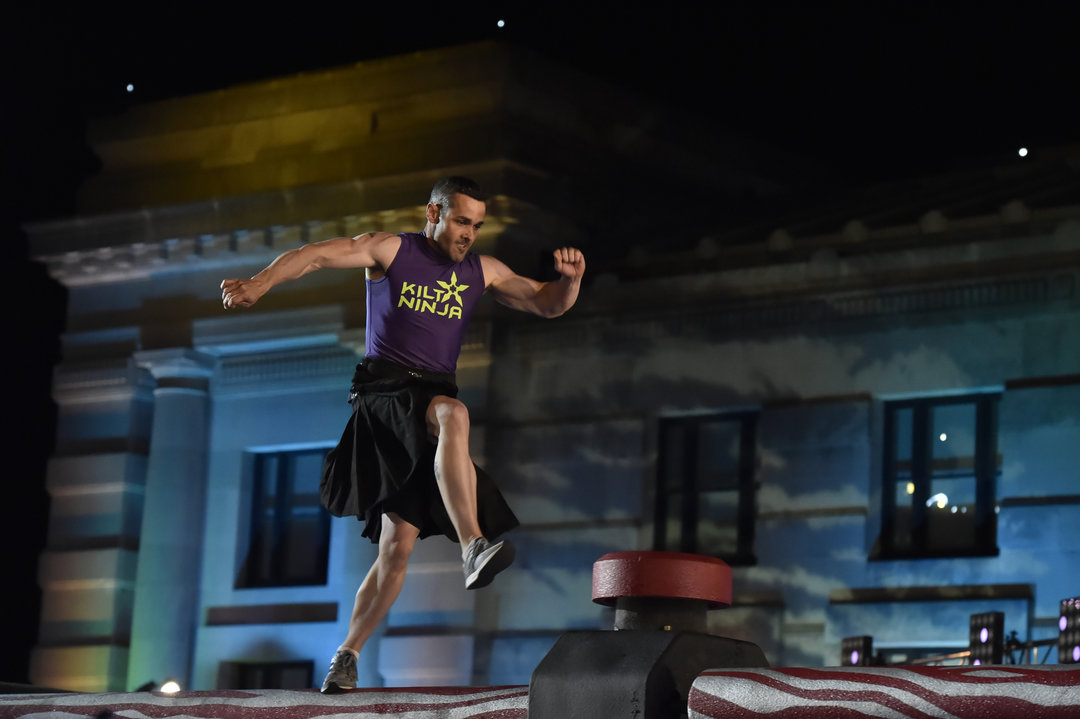 [Wes Whitlam's foot placement is perfect as he looks to move from one "spinning log" onto the "dancing stone".]

"Almost every ninja fears the balance obstacles", was a statement Matt Iseman made during the Daytona City Qualifier. This statement could not be more true, and Broken Pipes was an insanely hard balance obstacle. To create this monstrosity the producers took a traditional balance obstacle, the Spinning Log, and combined it with another old balance obstacle, the Dancing Stones. The Dancing Stones were all about slow methodical foot placement. While foot placement is certainly important for the Spinning Log, speed is much more important there. The Broken Pipes required precise quick steps, followed by a controlled stop and more quick precise steps, which is a lot to think about especially while your footing is constantly spinning (there was the other option that Ethan Swanson and Justin Cranmer went with to avoid the Dancing Stone and just jump over it but this looked extra difficult).

Crank It Up comes in as the fourth fan created obstacle to make this series, joining the Battering Ram, Sky Hooks, and Wingnuts. In terms of the total number of ninjas eliminated, Crank it Up was this week's Ninja Killer, eliminating 35 ninjas (2 more than the Broken Pipes - if we use the aired/annotated runs Crank it Up eliminated 14 ninjas, while Broken Pipes eliminated 12). So far this season only Tick Tock, 43, and Wingnuts, 40, have taken out more ninjas. Crank It Up also had the lowest completion percentage in Kansas City if we use all the data at 41.67% (25/60, but only the second lowest according to the aired/annotated runs 64.1% 25/39). 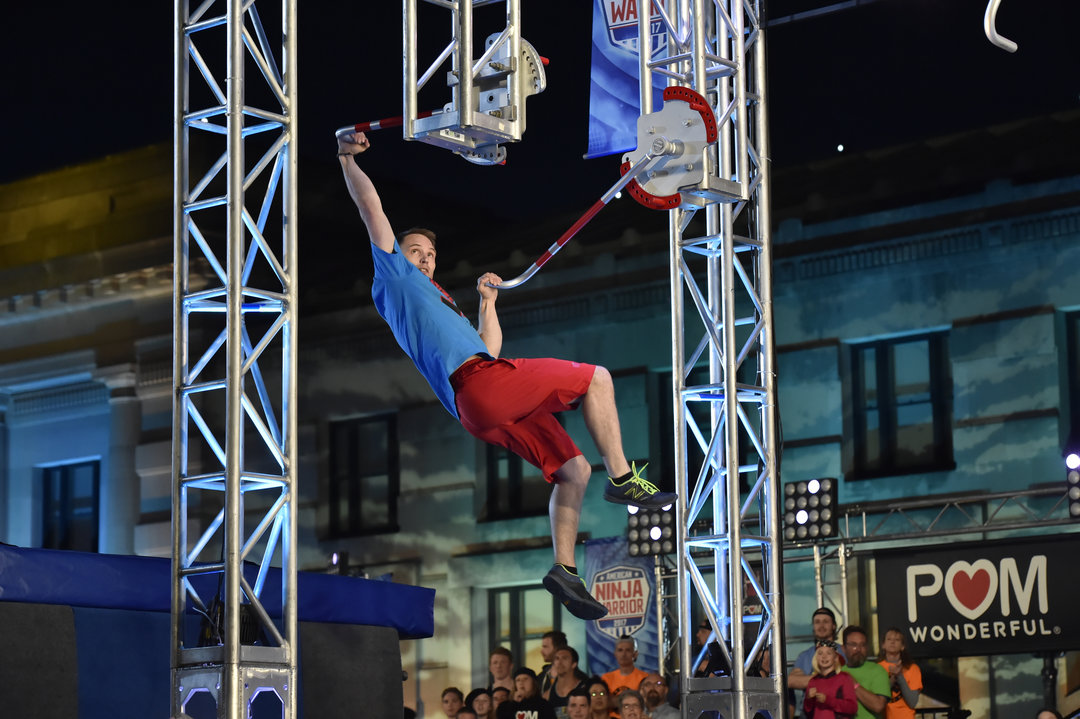 [Mitch VeDepo "cranks" up the handles for Crank It Up, a movement the ninjas had to do many times to get through this crazy fan creation.]

The creator of this awesomely evil obstacle, Kevin Brekke, got to Crash the Course and break it down with Alex Weber and Natalie Duran. Brekke describes the kip as an essential component to getting through this obstacle. Kipping is something very familiar to ninjas, so why were so many taken out? Because Crank It Up requires a lot of kipping, a lot of hang time, and a lot of total moves. And of course it throws in some awkward downward laches for good measure.

Broken Pipes, and Crank It Up eliminated a combined 68 ninjas, but of the 25 left standing, only 12 were able to complete Bar Hop, a completion rate of 48%. Bar Hop makes its return from last season where, by completion percentage it was the Ninja Killer in Oklahoma City at 64%. This year ninjas had to face Bar Hop immediately after completing the exhausting Crank It Up, which is a likely cause for the drop in completion percentage. 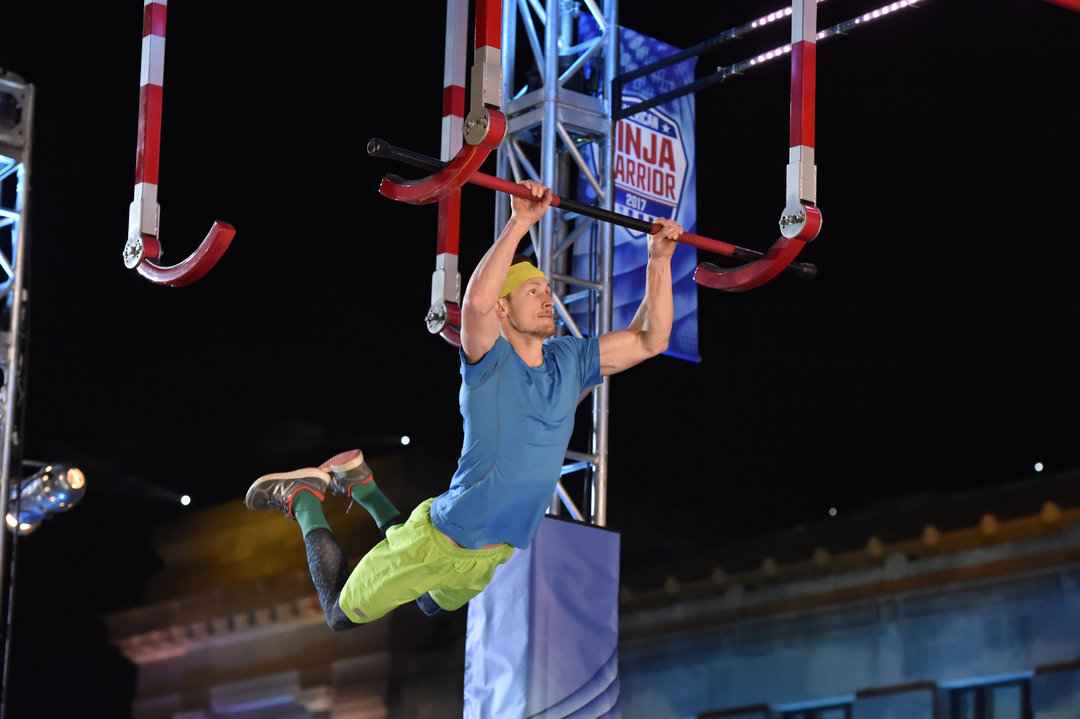 [Jeremy Morgan successfully "hopped" the bar from its starting cradles to the second set, and looks to carry his momentum, creating a shorter reach to static bar.]

Bar Hop is essentially an easier version of one of the hardest obstacles in American Ninja Warrior History, the Flying Bar. The technique to complete the two obstacles is exactly the same, the only differences being the cradles where the bar sits, and the total number of "bar hops". For Bar Hop the bars rest in long deep tracks, which allow the bar to move and ninjas to generate a momentum, these deep tracks are also supported by vertical bars, which allow ninjas to overshoot the cradles and rebound back into them. To contrast, the Flying Bar's Cradles are much shorter, much shallower, and supported on the sides forcing "bar hops" to be much more precise. Also Bar Hop sees ninja making one "hop" reaching for a stationary bar, reaching for another moving bar, then making one more "hop". While Flying Bar has Ninjas making 5 of the more difficult "hops".

Will we have a fifth straight fan created obstacle claim the title of Ninja Killer next week?