If we include the ninjas annotated at the end of the episode, we saw 29 ninjas in LA City Finals. Each of the 4 ninjas who received no air time and did not make the graphic at the end were eliminated by Cannonball Drop. Here's the full breakdown of obstacles which eliminated ninjas according to Nikki Lee's "What you didn't see article": 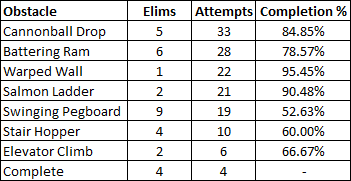 [A table of what obstacles eliminated what ninjas in the LA City Finals.]

12 ninjas saw early exits, not even reaching the back half of the course. Much like in qualifying, a bulk of the damage was done by Cannonball Drop, 5 eliminations, and Battering Ram, 6 eliminations. Then, 2 more ninjas including the fastest finisher of the City Qualifier Grant McCarty were taken out by Salmon Ladder. So even before we got to the true "back-half" obstacles only 19 ninjas were left, that's just 42.42% of the initial field of 33. 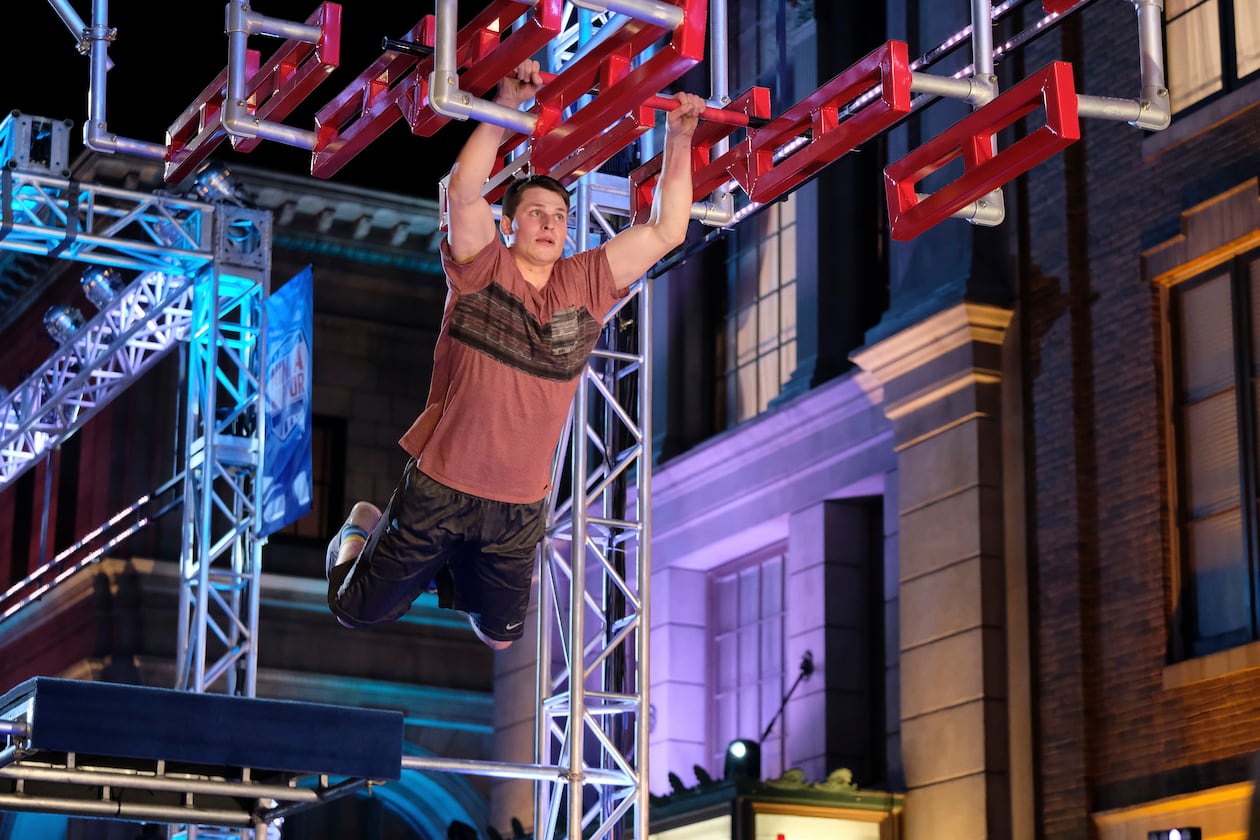 [Jackson Meyer, goes with the big hop technique on the Stair Hopper which many more ninjas were able to figure out this season than last season.]

The Swinging Pegboard just looked like a diabolical creation. Pegboards are nothing new to American Ninja Warrior, and have had varied in both appearance and difficulty. The Monkey Peg(s), have been on a few courses, first appearing in the Season 5 Miami City Qualifier, then again in the Season 6 Venice City Qualifier as a Monkey Bar section up to a pegboard down. Then there was a slight change for the Season 7 Military City Qualifier, where whole thing appeared as a pegboard, but the upward section still consisted of pegs locked in place, and the downward slope was a traditional pegboard. The combined completion percentage for all these traditional pegboards is 79.79% (75/94). You could also argue that Keylock Hang and Circuit Board were variations of pegboards, but again they have high completion percentages. 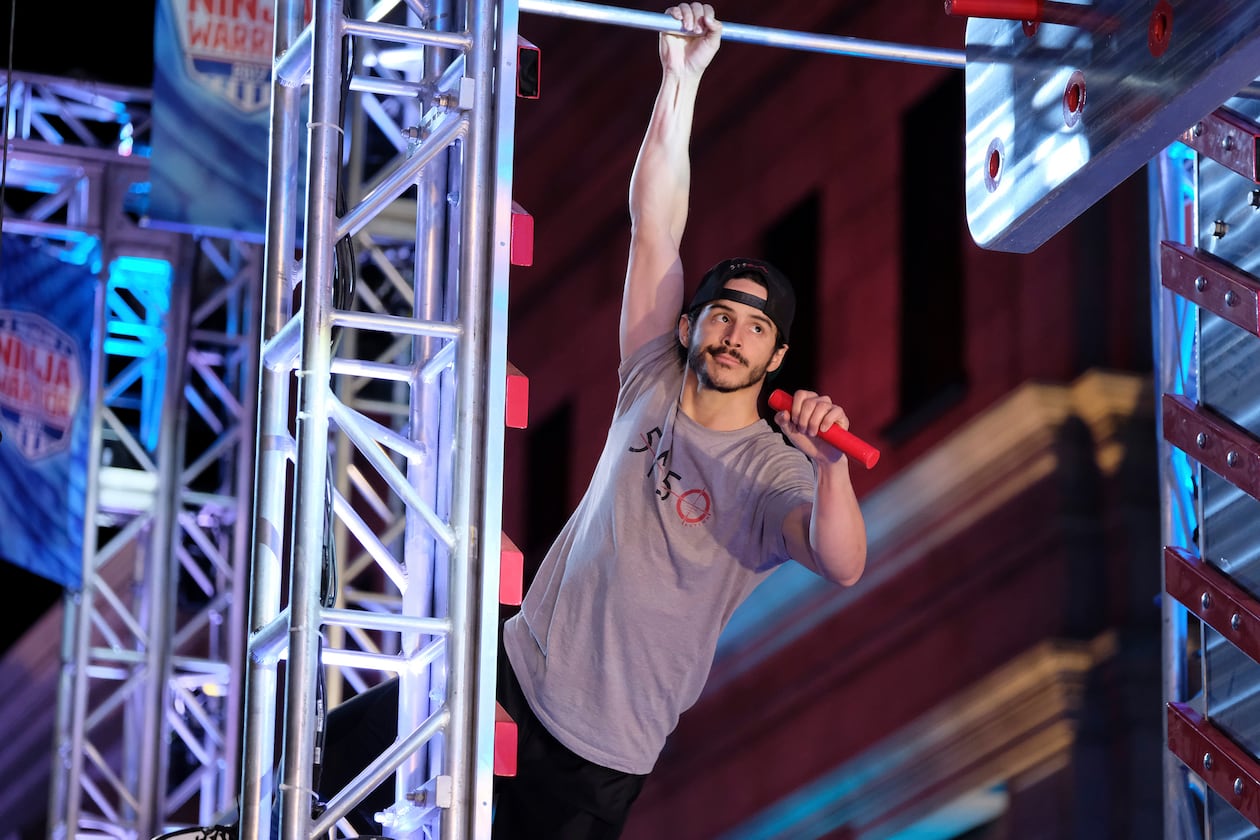 [Flip Rodriguez demonstrates a frustrating situation that can happen on any pegboard. A peg comes out before you're ready to make your next move.]

So what made this once easy obstacle so difficult? Well definitely don't watch Drew Drechsel demo it on Crashing the Course! Drew tends to make everything look too easy, and this is no exception, especially since the "put the peg" in your pocket technique" had to have have been banned in the actual competition. All pegboards require one thing, precision. Although Drew's completion made the obstacle look too easy, his words ring true, tight core and calm and focused game plan can get through any pegboard. 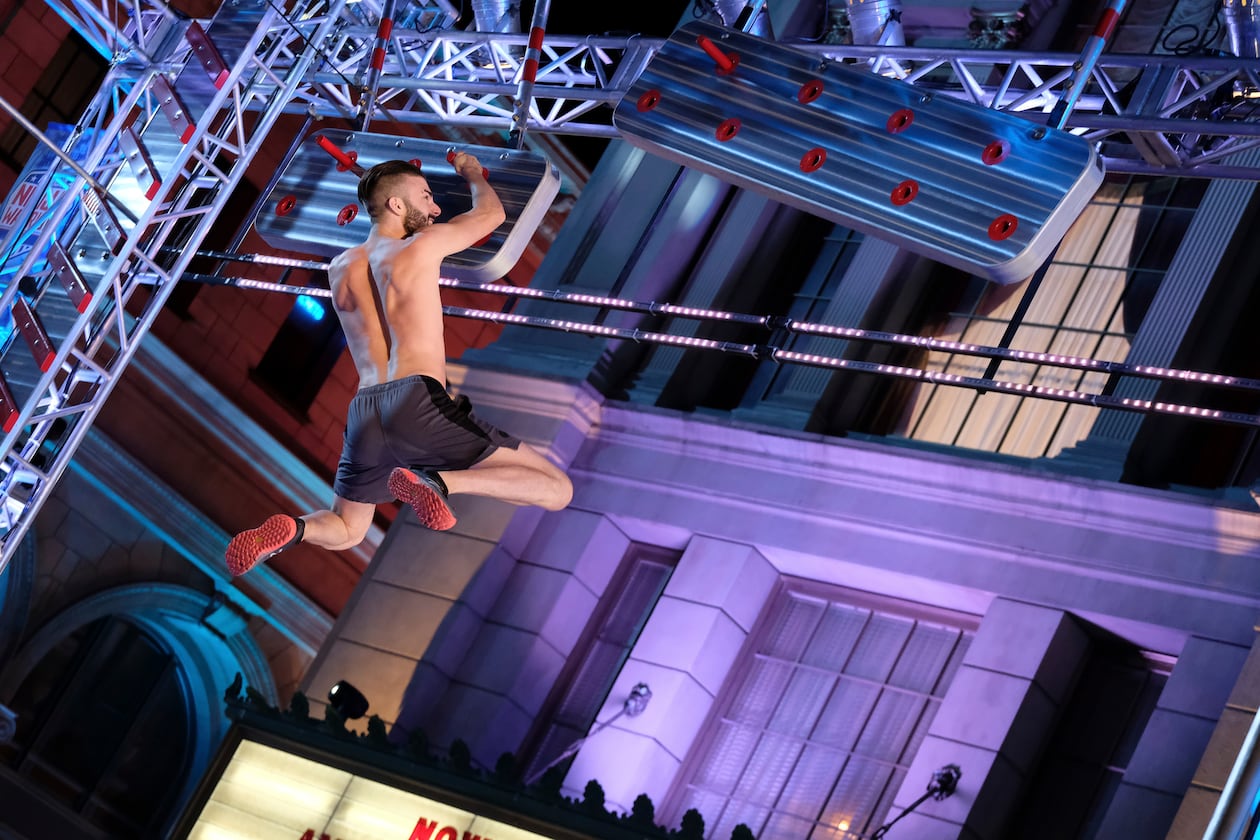 [Benjamin Humphreys didn't have enough momentum to make the reach to the second board very easy, and essentially found himself in a bad situation.]

The Swinging Pegboard still requires precision, but now it requires precision while moving which is a whole new ball game. The real tough move was from the first board to the second. The pegs as they were placed for the ninjas left this a huge move, that would have been virtually impossible without any momentum to help bring the first board closer to the second. Generating this momentum was pretty textbook for ninjas, pull down hard with your leading arm and driving their legs up and in the direction they want to go, followed by the exact opposite, a hard pull down with their back arm and driving their legs up and away from their end goal. A skill used on nearly any swinging obstacle. After enough momentum was generated a skilled ninja should be able to time their swing and reach the peg on the second board without too much difficulty. Now the second board was free swinging forcing ninjas to be extremely precise, a difficult task but one made to look easy by those who did clear it.