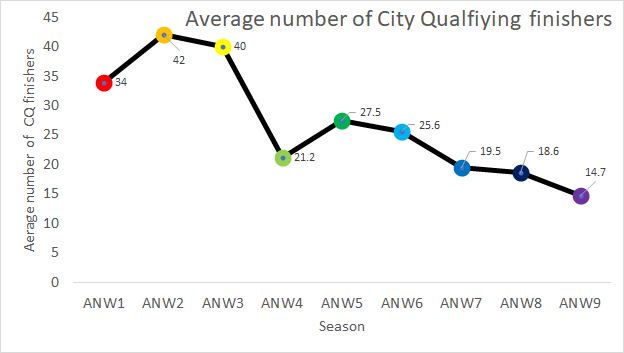 The Denver course was particularly brutal taking out several top ninjas. Fan favorites like Jake Murray and Jon Stewart won't even be moving on to the City Finals because they were "bounced" (couldn't resist - they fell on the Bouncing Spider) into the water by the third obstacle. Just as devastating, were the streaks two other fan favorites saw come to an end. Brian Arnold had never failed a City Qualifier before, but he saw his shot at 6 consecutive completions come to an end when he hit his nose on the Rail Runner's transfer. As it stands, Brian's streak of 5 straight City Qualifier clears is tied for the 10th most all time. Meagan Martin also saw her quest for an unprecedented fourth straight City Qualifying clear come to an end on the Rail Runner. For context, no other female has more than one City Qualifying completion, Meagan had done so in each of her previous 3 seasons. Even still, only 23 ninjas have ever put together streaks of more than 3 City Qualifying completions in a row. 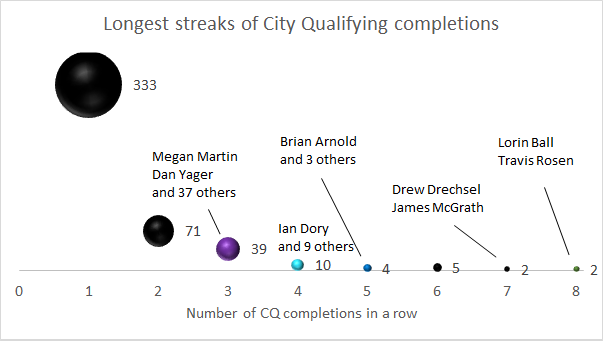 Amidst the turmoil a few top ninjas were able to succeed. Dan Yager and Ian Dory remained perfect in City Qualifiers clearing their 3rd and 4th straight respectively. Ian's impressive 4 straight City Qualifying completions is still only half the current record. Lorin Ball was able to complete the brutal course and extend his streak to a nearly incomprehensible 8th straight tying Travis Rosen. Travis Rosen nor Lorin Ball received no airtime if they competed in Season 1, so to my knowledge, both men never failed a City Qualifier and they've been doing this a long time. 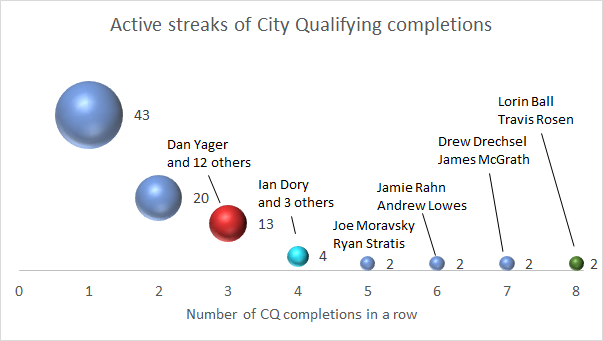 [88 ninjas cleared City Qualifiers this season, that means 88 ninjas have active streaks of at least 1 City Qualifying clear in a row. The bubbles represent the relative size of the number of ninjas with number on the x of consecutive City Qualifying completions.] 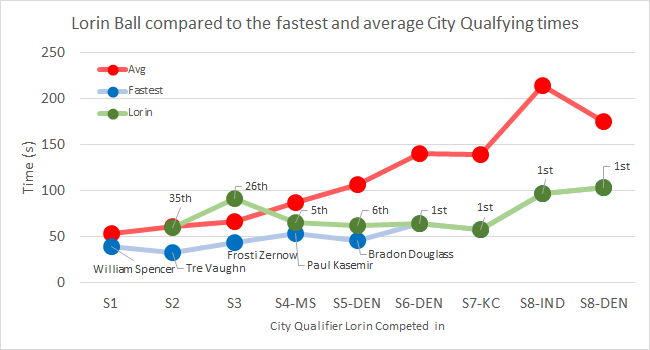 In Season 2, Lorin did not advance to the City Finals because he finished with the 35th fastest time, and back then (rules changed in Season 4) only the top 30 moved on. In Season 3 Lorin finished 24.86 seconds slower than the average City Qualifying time, and barely snuck into the top 30 finishing 26th. Since that time he's been a speed demon. In Seasons 4 and 5 he finished inside the top 6 finishing a few seconds behind other top speedsters like Brandon Douglass, Jake Smith, and Paul Kasemir. After Season 5, Lorin has been unbeatable. His total time for those City Qualifiers is 321.94 seconds a full 345.73 seconds faster than the average time for those same City Qualifiers, whose combined total was 667.67 seconds. Meaning Lorin is more than twice as fast as the average City Qualifying completer in his same city.

The Women of American Ninja Warrior:

This season, 9 female ninjas finished inside the top 30, which would have qualified them for the City Finals using the traditional rules. The number of female ninjas to qualify for City Finals has only increased. Starting in Season 5 when Jessie Graff (chicken costume and all - couldn't find the City Qualifying run) became the first female to qualify. That following season, we saw 3 amazing ladies not only finish inside the top 30 but they each completed their City Qualifying courses. In Season 7, 3 ladies again qualified for City Finals. Then last season, there was an explosion of ladies reaching the City Finals when 7 different women did so. 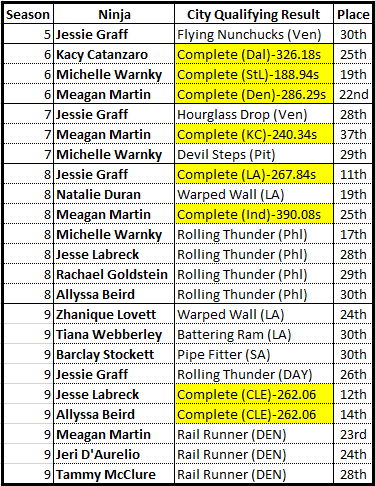 [This season a record 9 women finished inside the top 30. Here's a complete list of all the women who would have qualified for City Finals, according to the traditional rules of completion/ 30 furthest fastest.]

This year that number was stepped up to 9. 7 of the 9 women competed on Season 2 of Team Ninja Warrior. For 5 of the 9 women this will be their first shot at the City Finals. 3 of the 9 women are rookies who finished inside the top 30 in their first season. 4 of the 9 are ladies who qualified for City Finals last season. No matter their experience, all these women have proven they're legitimate threats to qualify for the National Finals (and not through another new rule which will automatically place the top 2 females in each City Finals into the National Finals).

All women moving onto the City Finals: