The Denver City Qualifier featured the second lowest number of clears in American Ninja Warrior history, 8 (not sure why Matt said this was a "record low" during the broadcast). The City Qualifier to feature fewer clears was Venice Beach in Season 7, which had 7 finishers. Only 3 City Qualifiers had fewer than 10 clears, the one not mentioned so far was last year's Philadelphia City Qualifier, which had 9.

[A list of the 10 obstacles with the lowest completion percentage of all obstacles which were completed at least once.]

If this figure looks familiar, it's because this is an updated version of one I used last season when talking about the the Stair Hopper in the Philadelphia City Finals.

The entire Denver City Qualifier was brutal, we saw the most ninjas eliminated by the Floating Steps (only during the broadcast, third most if we use Nikki Lee's "What you didn't see" article). Also according to the "What you didn't see" data Ring Swing actually had the 5th most eliminations of any obstacle all season (replacing Ring Jump which sat in the 5th slot last week), 30, trailing only Tick Tock - 43, Wingnuts - 40, Crank It Up - 35, and Broken Pipes 33. The only second obstacle to have more eliminations this season was Tick Tock. 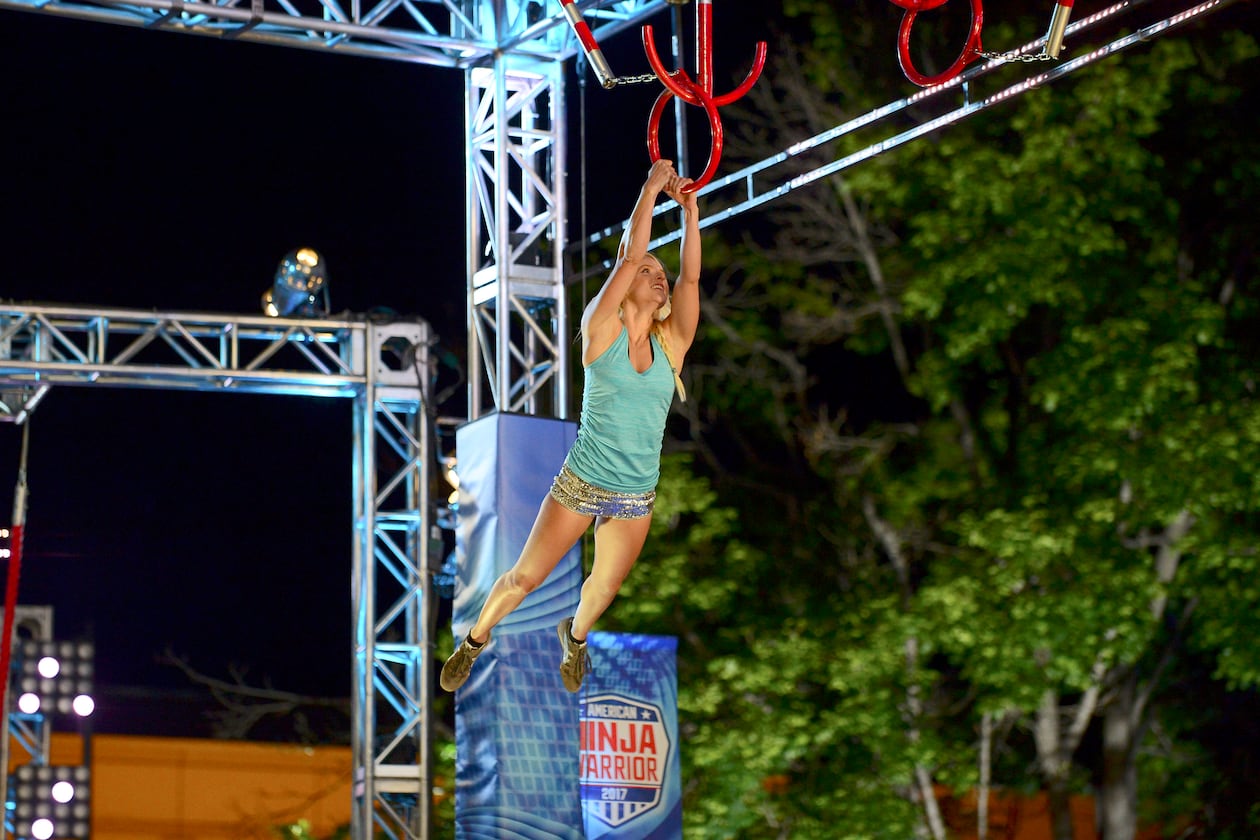 [Tanya O'Donohue hooks the first ring of Ring Swing in place (a precision move that many ninjas were unable to accomplish) while her momentum carries her back before she can reach to the second section.]

Bouncing Spider was taking ninjas out in four different ways: the mount, the plexigalss transfer, the trampoline, and the dismount. Some legends were even taken out by this unusual obstacle such as Jake Murray and Jon Stewart. Then there was the Paddle Boards which took out 31 ninjas in Philadelphia last season. All that means Ninjas had already endured a lot by the time they reached the Rail Runner.

Rail Runner was a very unique obstacle, in a way it was like a much harder version of the Pipe Slider from way back in Season 1 where the Ninjas had to manually slide a bar along a track, sustain a 2 foot drop and keep going. Pipe Slider like obstacles have disappeared from Ninja gyms and off-season competitions in recent years so reliving this throwback could have thrown off some of the competitors.

In addition to not being something they've seen much recently Rail Runner had difficult aspects at every turn. First the grips, unlike the Pipe Slider of old, Rail Runner had Ninjas holding an angled grip to start (harder than a holding a traditional horizontal bar) and a vertical grip during the second portion (much harder than a horizontal bar). Ninjas had to hop the bar out of its starting cradle, then up/over about 1 foot of track sloped at 45 degrees. Ninjas then found themselves in a 1 foot flat portion, which basically served as a launching and catching spot for the 6 feet of track sloped at 30 degrees they must hop and shimmy the bar (and themselves hanging from it) up. 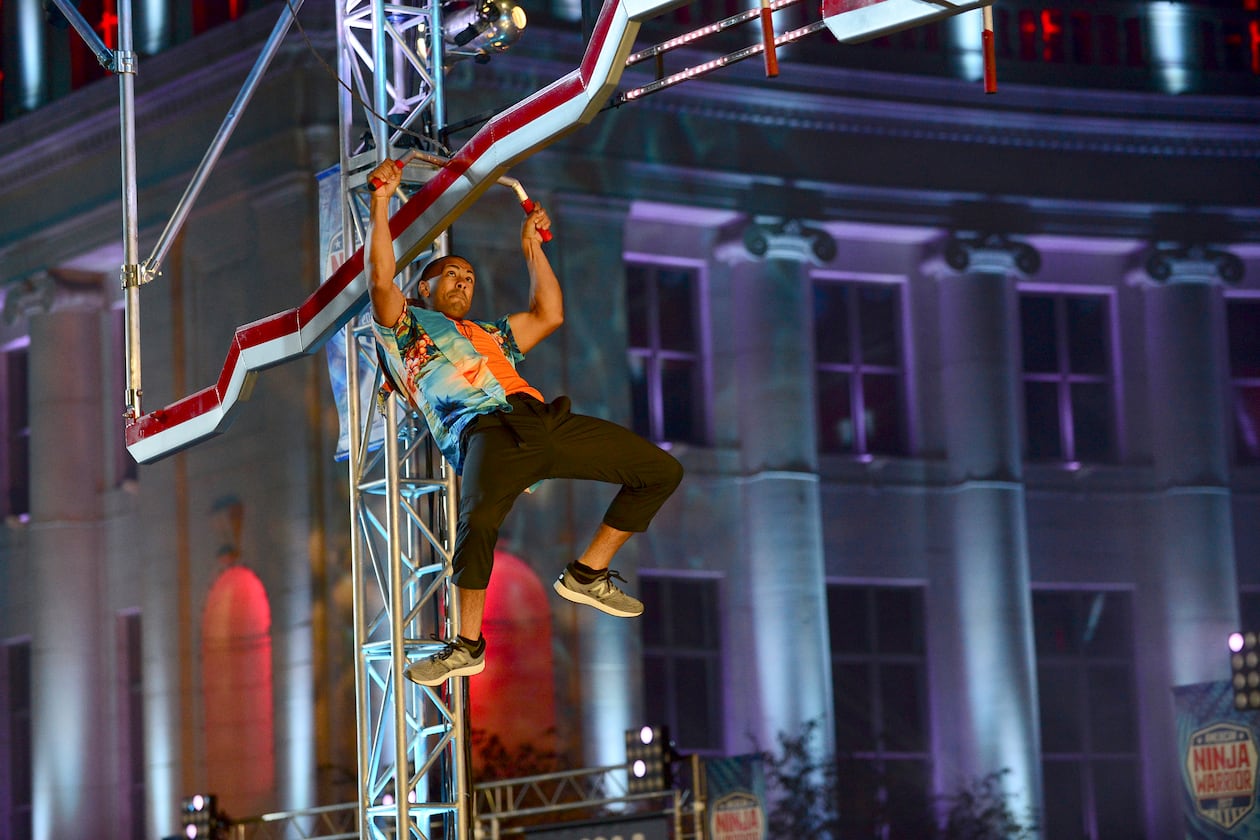 [Yancey Quezada hops the bar up the long sloped part of the Rail Runner.]

This upward climb required great technique, a tight core, and the ability to maintain momentum despite gravity pushing in the opposite direction. To achieve this ninjas had to muster a huge string of small kips. Small kips worked better than large kips because the back swing of a large kip would position the ninjas bodies too far behind the bar, sending them sliding back down the track.

The few ninjas who were able to to make it up this 6 foot shimmy only got a pseudo rest as the track leveled but still maintained a 15 degree slope for two feet, followed by another 45 degree 1 foot slope. After all that the ninjas could lock the bar into another cradle before transferring to the second section. The transfer required a 3 foot drop and a 1 foot lache, from an angled grip to a true vertical grip. That move puts a lot of force on the ninjas pinching grip strength as they have to catch their body weight, plus the force of the drop on a vertical grip. Imagine dropping down three Salmon Ladder rungs and catching some nun-chucks. 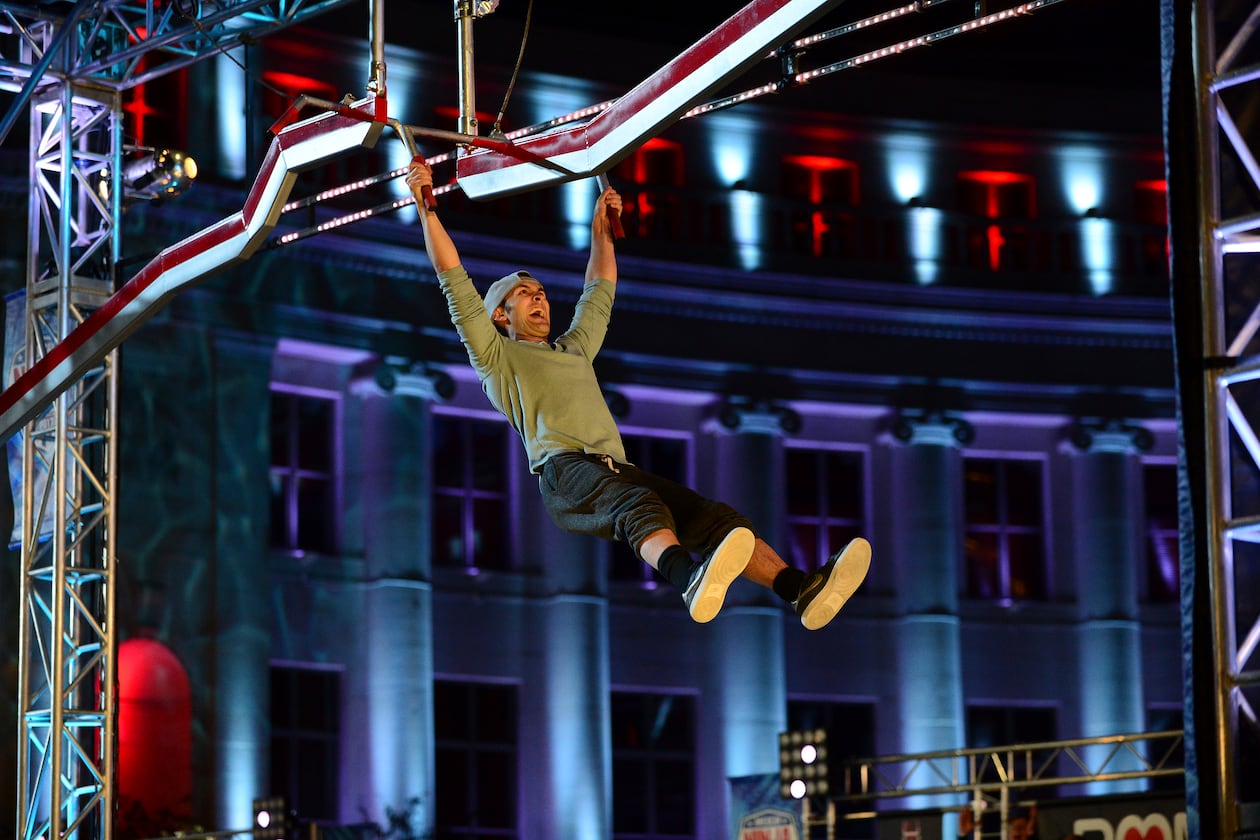 [Lorin Ball exerts all his might to make the transfer between the sections of the Rail Runner.]

After that, ninjas still had to hop/shimmy (again while holding the harder vertical grip) a seemingly less forgiving bar up two sets of 30 degree sloped track which each extended about 4 feet with a 1 foot flat portion in the middle. 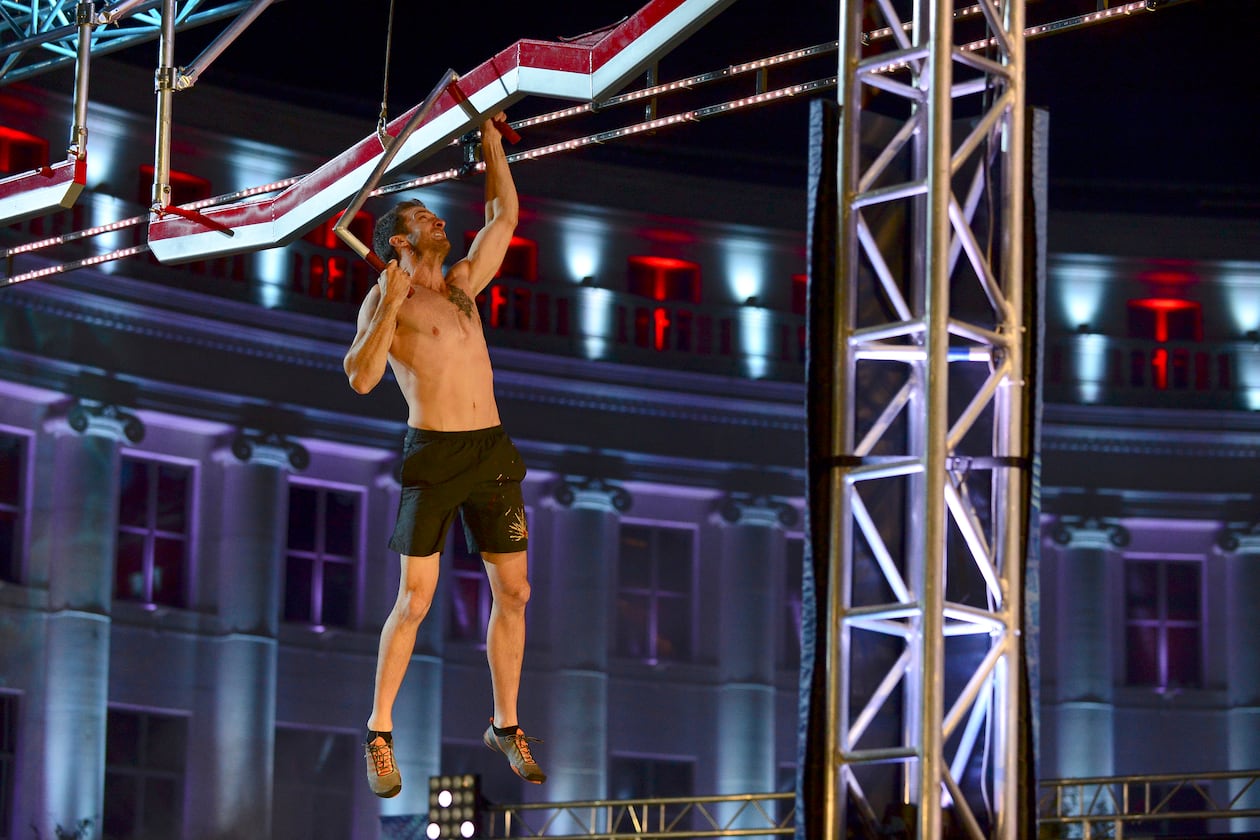 [Craig Richard reached the second section of the Rail Runner, but got the bar askew going up the its first sloped section, leaving him in a position which requires a very precise correction.]

Sooooo yea that was a super difficult obstacle, lots of hang time on hard grips, a hugely taxing catch in the middle, and constantly working against gravity, all while trying to stay centered because even the smallest shift in body weight could send a ninja and the bar off to the side of the track in a nearly unrecoverable position. Please note all these measurements other than the 3 foot drop between the sections are guesstimates based on what I saw.

We've seen a bunch so far this season, and there are still two fan created obstacles yet to be revealed. The City Finals and beyond are bond to have some doozies of Ninjas Killers!