Yes, I know the obvious answer, 1:10.49 but what I want to look at this week is how that time compares to other historically fast finishes.

American Ninja Warrior City Qualifiers have changed significantly from Season 1 to Season 9. In Seasons 1-3 the City Qualifiers were equal parts a test of obstacle skill and a race, because only the 30 fastest finishers moved on to the City Finals. Not only did the rules format change, but the courses changed as well. In recent years we've seen much more endurance based upper body intensive obstacles, we've even seen obstacles that are slightly modified versions of obstacles we've previously only seen Stage 3 such as the Bar Hop (a modified Flying Bar) and I-Beam Cross (a modified Spider Flip - sorta). 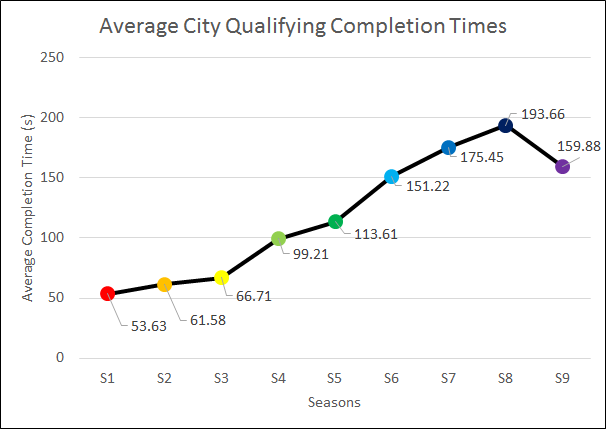 [The average time to complete City Qualifier courses has increased every season. We're only half way through Season 9, give it time, I bet the trend holds true.]

Not as cleanly as with but the averages but the general trend is still there with fastest completion times. 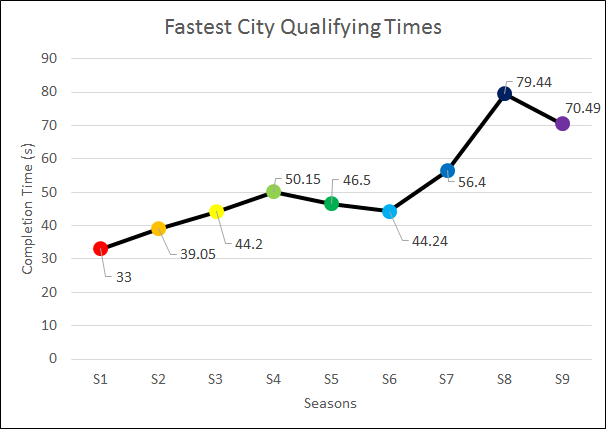 [Although it isn't a 100% perfect trend the fastest City Qualifying time has generally increased as seasons have gone on.]

That being said, Drew Drechsel's Daytona City Qualifier was unlike any we've seen before. Now unless you've been living under a rock for the past couple years you probably recognize how unbelievable Drew Drechsel has been on Ninja Warrior courses. Just in case, here's some of the highlights: Back to back Stage 3 appearances on American Ninja Warrior (he went further than any other competitor last season), 3 straight trips to Stage 3 in Sasuke (he went further than any other competitor last season). He came in first in the National Ninja League Finals (he got second the year before), He finished second in the Wolfpack Ninja Tour, and he finished second at Ultimate Backyard Warrior. There's a lot more but I think you get the point.

Being the fastest City Qualifying time in over a season is impressive, however the real impressiveness of Drew's run the other night comes when we factor in the rest of the field. Drew finished 36.65 seconds faster than the next fastest ninja, Travis Rosen,107.14 seconds. This is the largest gap between the fastest finisher and the second fastest finisher in any of the 32 city qualifiers in the show's history. 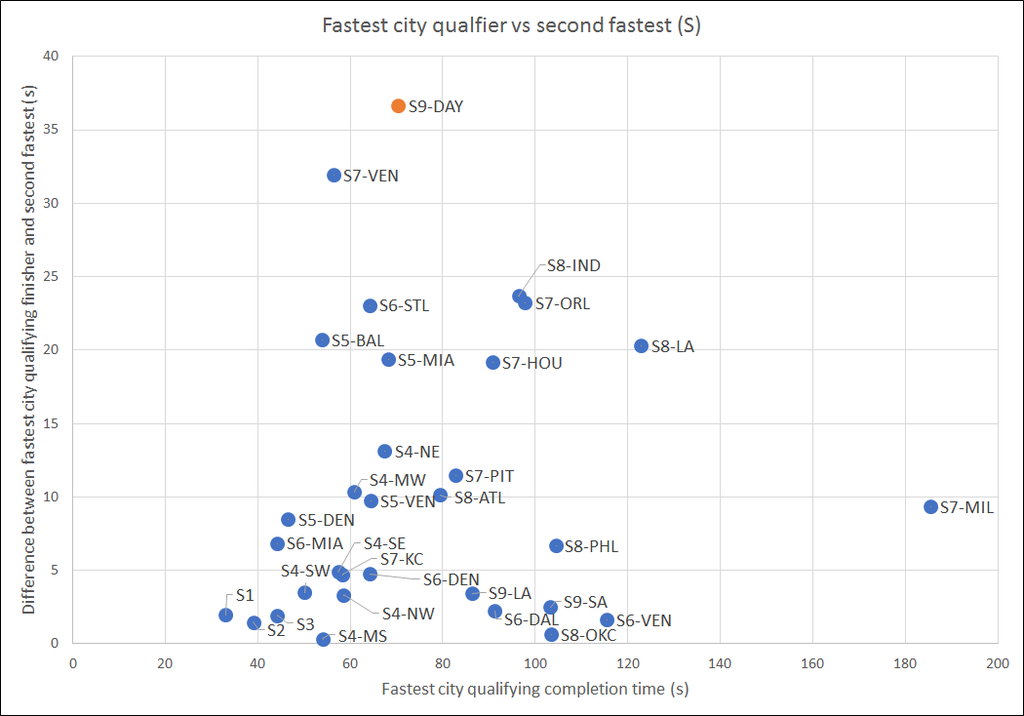 [This graph depicts the fastest city qualifying finishers, with their times plotted on the x-axis and the difference between their times and that of the second fastest finisher, plotted on the y-axis. A key as to who these runs belong to is provided at the end of the article.]

Another way to gauge Drew's speed compared to the rest of the field is to look at the percentage of time the second fastest finisher (Travis Rosen) was on the course, compared to Drew. Rosen was on the course over 150% (151.99%) of the time that Drew was. This means if Drew and Travis's runs were started at the same time and run on a loop, Drew would complete the course 3 times before Travis would complete it twice. 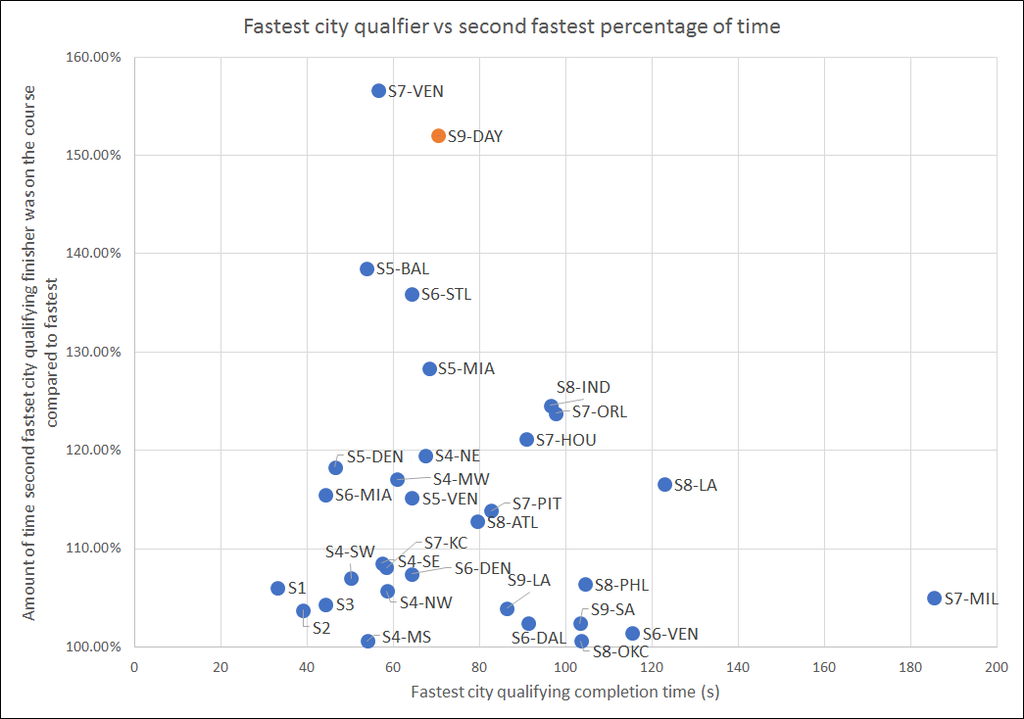 The only time a City Qualifier's second fastest finisher was on a course for a larger percentage of time than Travis to Drew, was again in the Season 7 Venice Beach City Qualifier where Alan Connealy was on the course for 156.6% of the time Kevin Bull was. Bull finished that Qualifier in just 56.4 seconds. Although his margin of victory was smaller 31.92 seconds compared to Drew's 36.65 seconds, Connealy's total time divided by Bull's time leaves a larger remainder than Rosen's total time divided by Drechsel's total time. 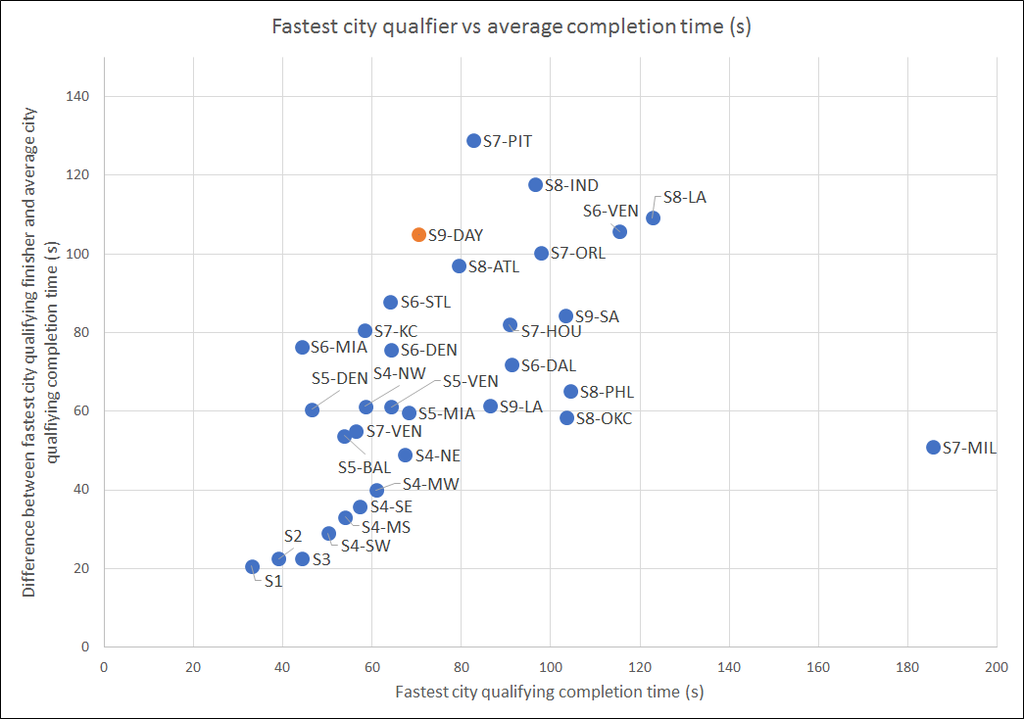 The raw differences between these fastest finishers and the average completion time ridiculous! Elet Hall was over 2.5 times faster - or put in percentages, the average city qualifying finisher in Pittsburgh in Season 7 was on the course for 255.89% of the time that Elet was was. 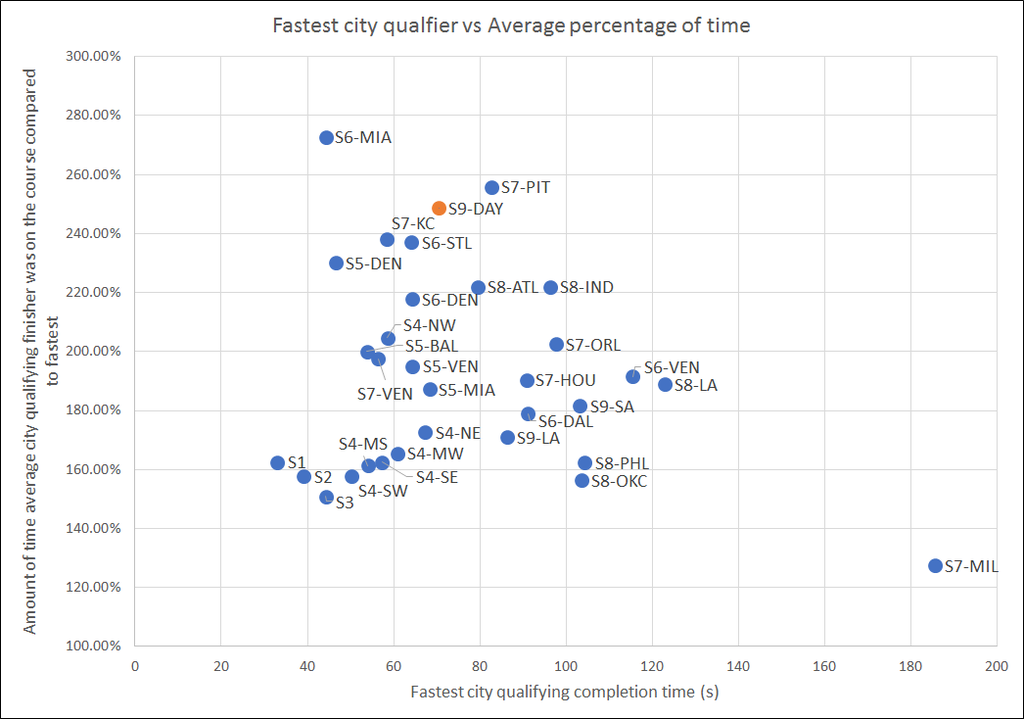 I'm including this table, because a lot of research went into these figures this week and instead of leaving it to rot in an Excel file I probably won't look at until sometime next season I figured I'd post it for everyone to see. 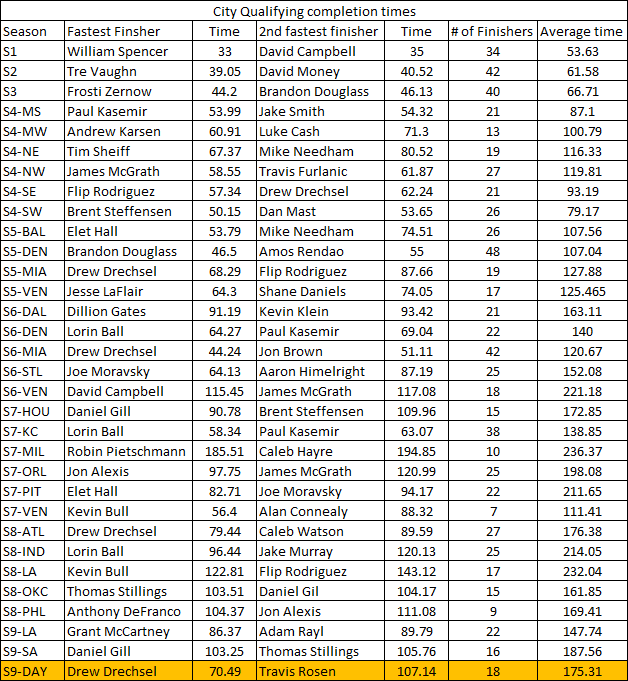 [This table shows the fastest and second fastest finishers for each of the 32 City Qualifying courses in American Ninja Warrior history (so far). It also shows their times, the number of finishers on that course and the average city qualifying completion time. The table is sorted alphabetically for Seasons 1-8 with Season 9 in chronological order.]