Jumping right into spoilers this time!

The San Antonio City Qualifier started off with tons of emotional triumphs. Nico Gentry is legally blind, but that didn't stop him from working his way to the Sky Hooks. Heck, he breezed through the Floating Steps in almost the same amount of time we saw Flip Rodriguez do them in Los Angeles. Then there was Charlotte Eccles who recently had a brain tumor removed and was able to concur the Floating Steps. Its a pretty emotionally packed episode when one of the heartwarming successes from last season Artis Thompson III who competes with a prosthetic leg doesn't even make the broadcast.

Even past ninja greats like Kacy Catazaro had powerful motivations this season. Kacy revealed her mother recently had a heart attack, which fueled her run.

I bring up the scoring system not to promote my site (but I mean if you haven’t checked it out please do so there’s a lot of cool stuff on there). Instead I bring it up because this fantasy scoring system is the most definitive ranking system we have for ninjas – please note although this is the best ranking system we have for ninjas, it looks at total career results, and as such ninjas with longer (more seasons) careers are often ranked higher.

Now that all the caveats of what I want to say are behind us: According to that ranking system, when applied to every aired/annotated run in the show’s history, we saw 10 ninjas ranked inside the top 150 compete in San Antonio, and that doesn’t even include known ninjas like: Brandon Pannell (154), David Yarter (176), Jonathan Parr (246), Olympic medalist Jonathan Horton (248) and Grant Clinton who was a beast last season (272). 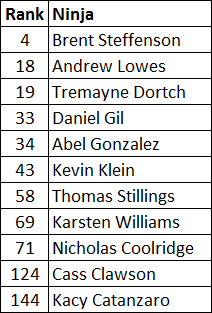 [These 10 ninjas have accumulated lots of fantasy points in their American Ninja Warrior Careers. This shows their current rankings of all aired/annotated runs ever]

Much like after the Houston City Qualifier, I want to focus on two of those top 150 ninjas, Daniel Gil (33rd) and Thomas Stillings (58th). Both men made their rookie debuts in Season 7 and were instant successes. As rookies, Daniel finished with the fastest time, 90.78 seconds, while Thomas finished with the third fastest time, 140.57 seconds (only Brent Steffensen finished in between the two rookies). Much like the City Qualifier the two rookies were great in the City Finals, with Daniel finishing 3rd and Thomas finishing 6th.

If this budding rivalry doesn't remind you of something from the American Ninja Warrior record books, you probably weren't around for seasons 4-6. During that time frame, two young Freerunners (who technically first appeared in Jump City Seattle) who earned trips to Japan in Season 3, their rookie season, squared off in the new "Southeast region". These two have become some of the best ninjas in the sport, Drew Drechsel and Flip Rodriguez. For three years they raced side by side and dominated the region, with one or the other posting the fastest time in nearly every City Qualifier or City Finals. 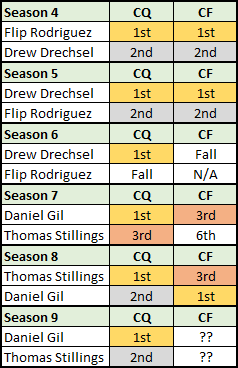 [This table shows just how dominate the respective rivalries have been over the past 6 seasons. CQ = City Qualifier, CF = City Finals.]

The third place finisher in San Antonio was Josh Salinas with a spectacular time of 130.29 seconds. That great time was still nearly 125% of the time it took Thomas Stillings to complete the course. This means if you were to line up Daniel, Thomas, and Josh's runs start them at the same time and play them on a loop, Daniel would finish the course 5 times before Josh would finish 4. And Thomas would be nearly done with his 5th as Josh finished his fourth.

Drew and Flip "lapped the flied" like this a couple times in City Finals, those times are posted below for comparison. 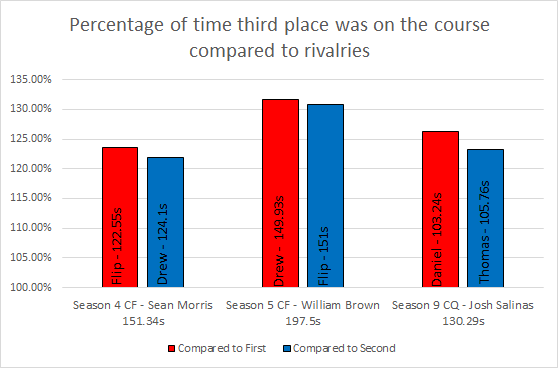 [To show just how dominate Drew/Flip and Daniel/Thomas are over their regions, this figure shows how much longer the third place finishers were on the course compared the rivals.]

Daniel Gil and Thomas Stillings are two of the sports bright young superstars. If they have anywhere near as successful careers as the last two great American Ninja Warrior "rivals" we're in for a great deal of entertainment in the coming years.

Barclay Stockett finished inside the top 30, which would have qualified her for the City Finals before this season's new women's rule. Barclay is the third female to finish inside the top 30 this season, joining Zhanique Lovett and Tiana Webberley. Barclay is the 17th time a woman has qualified for the City Finals (according to the old rules) and she is the 11th different woman to do so.

The Sky Hooks were designed by 7 year old Benjamin Tun (Hopefully I spelled that right), this is the second fan created obstacle to debut this season, last week's Battering Ram.