Sometimes, like last week with the Battering Ram, there’s a slam dunk Ninja Killer, one obstacle that was clearly the most difficult. Other times, the eliminations are pretty evenly spaced between all the obstacles:

Huge thanks to Nikki Lee whose "What you didn’t see" series gives me these awesome complete numbers, that make all my data analysis way less accurate.

This was clearly a week where one obstacle eliminated the most ninjas – Tick Tock (43), while another had the lowest completion percentage – Pipe Fitter (53.33%).

However, this week there was a silent third silent Ninja Killer (which had close to the lowest completion percentage at 54.55%). Although the Sky Hooks didn’t eliminate the most ninjas or have the lowest completion percentage I think it played a huge role in fatiguing the ninjas, rendering them incapable of completing the Pipe Fitter. For a more thorough review of the Sky Hooks check out Alex Weber Crashing the Course and taking on this second brutal fan created obstacle. 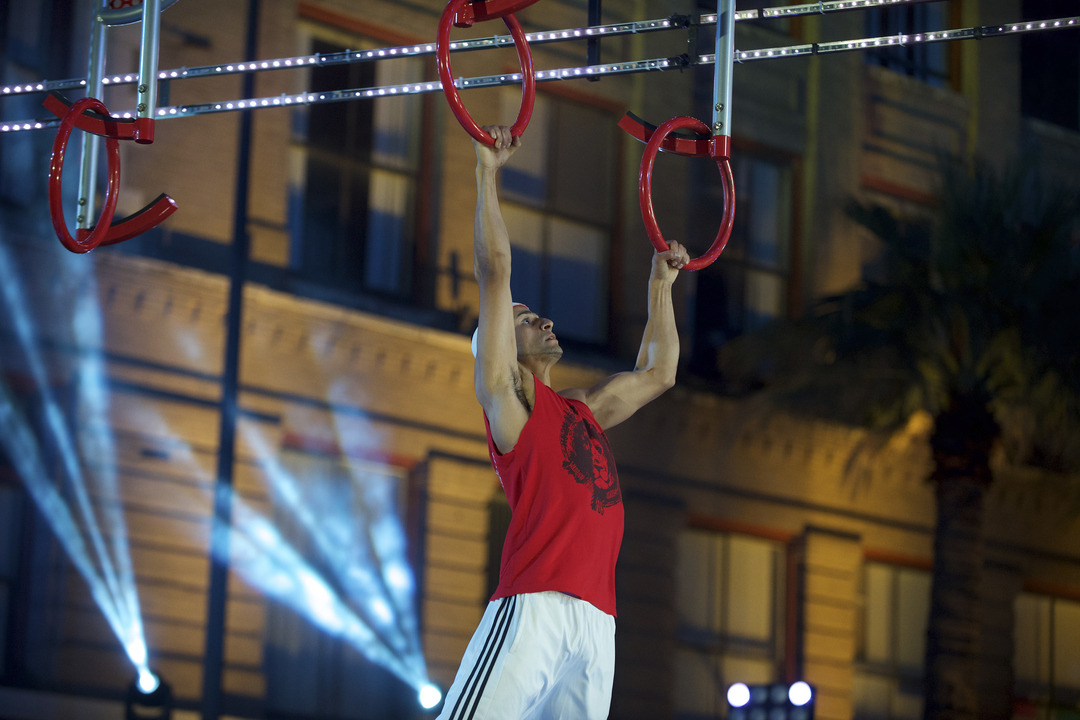 [The Sky Hooks required a lot of body control, a lot of hang time (as Abe Gonzalez shows), and a lot of movements to complete. None of which resulted in a ton of eliminations, but certainly affected the ninjas who completed it.]

As for the more traditionally defined ninja killers, Tick Tock was just as deadly of an obstacle last season too, when it serendipitously also claimed 43 victims (according to Matt during this week’s broadcast). Tick Tock, much like Battering Ram is a difficult obstacle due in large part to it’s awkwardness. Starting with the trapeze swing. It’s geometrically much easier to build up a big lache on a trapeze than a stationary bar, by virtue of the bar traveling with the competitor. However, building a lache on a trapeze requires an entirely different technique, which is why it takes several ninjas multiple swings before they can comfortably lache from the trapeze to the pendulum. 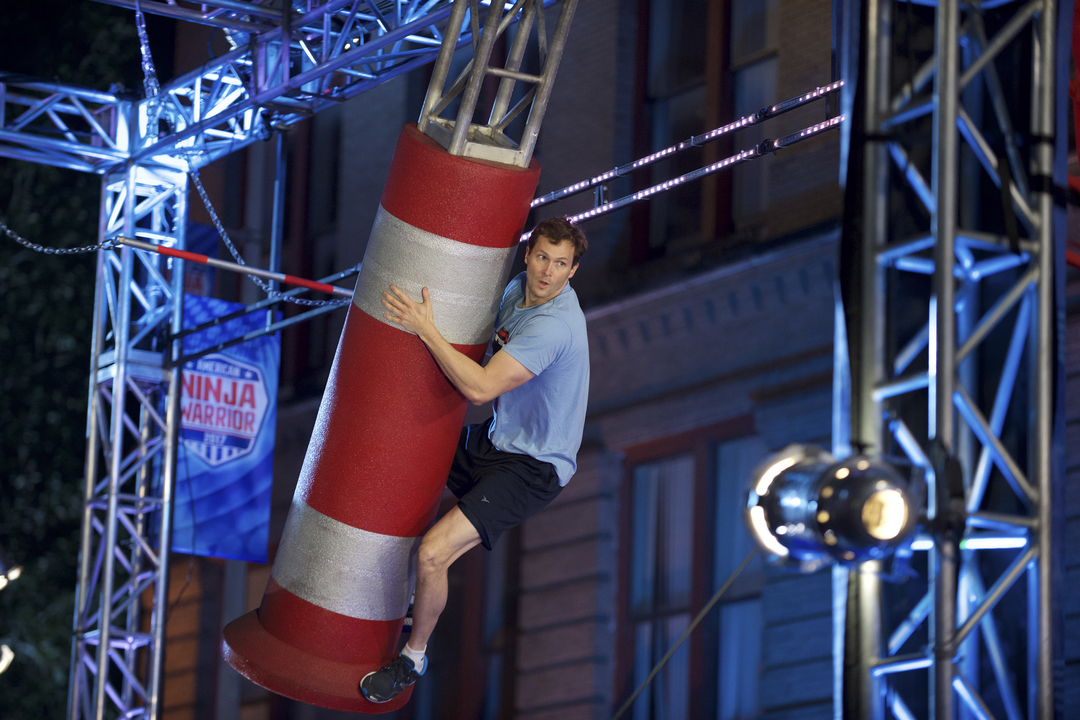 [Matt Laessig hit the pendulum with good momentum, shimmied to side and is eyeing the dismount off of Tick Tock, a task many ninjas were unable to complete.]

Again, building momentum on the pendulum is tricky. Ninjas have to involve their entire bodies while not only still holding on to the large pillar but also traversing their way around to the opposite side. It’s so awkward to build momentum and get around the pendulum that the ninjas who had the most success, actually just used their momentum from the trapeze and quickly shimmied around the pillar on their first swing to the dismount. Alex Weber took a nice behind the scenes look at Tick Tock last season.

Now I do want to point out, if I were to use the aired/annotated results this week the Pipe Fitter would have been another slam dunk Ninja Killer. During the broadcast (and including the annotated results posted at the end of the episode) Pipe Fitter eliminated 14 ninjas (of the 30 who attempted it), leaving it with a completion percentage of just 53.33% - which yes, is exactly the same as it was in the runs we saw, and awesome job by the production team keeping that true to form. The reason I mentioned fatigue from the Sky Hooks as a silent Ninja Killer earlier is because Pipe Fitter isn’t as devastating as it appeared. Last season it only eliminated 8 ninjas during the broadcast (in 36 attempts), and had a completion percentage of 77.78%. Of all the 5th city qualifying obstacles last season only the Swinging Spikes were "easier" – had a fewer eliminations (5) and a higher completion percentage (84.38%) than Pipefitter.

There were a few ways to climb the first section of the Pipe Fitter, over the top – like a partially fell tree, or an underneath shimmy. Either way, shouldn’t have been too taxing to the ninjas. The second pipe could be almost skipped entirely as even 5’0" Kacy Catanzaro and Jonathan Horton were able to keep their feet engaged until their arms had reached the end of the section. Meaning ninjas were excreting very little energy to complete this obstacle. 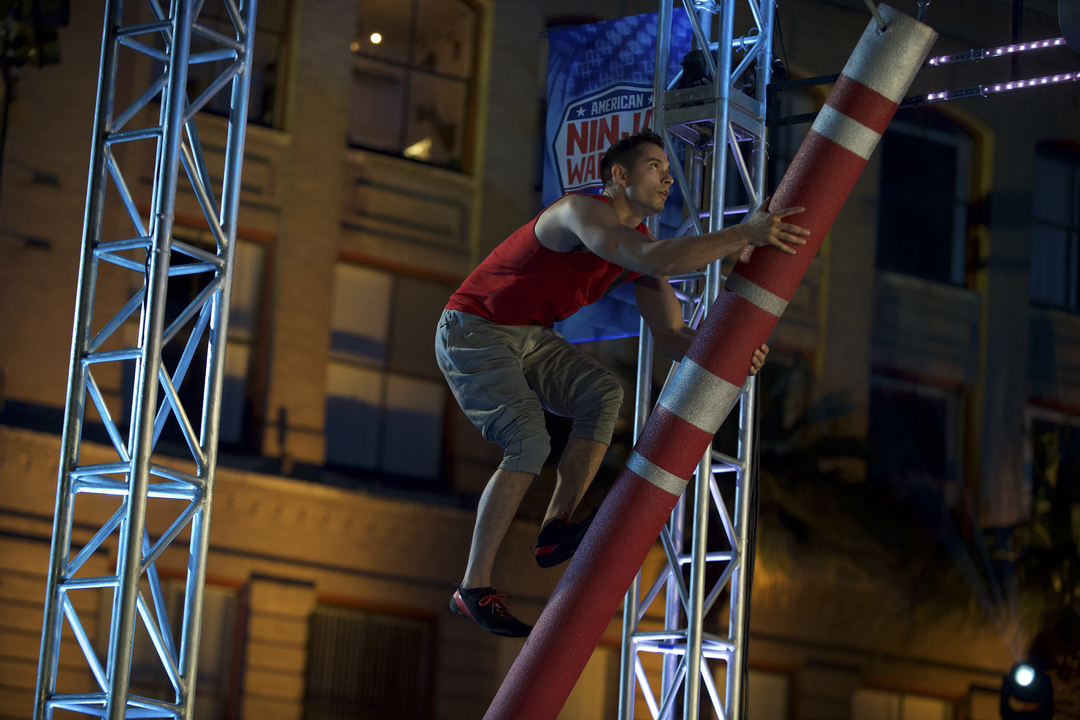 [Josh Salinas shows off the easy technique for clearing the first section of Pipefitter.]

The transfer to the third section of pipe was the most difficult move, a 6-inch horizontal lache from an overly false grip, nothing compared to any of the moves on the Battering Ram, but still not simple. From there a few hops or strong-arm movements and ninjas could reach the final section of pipe, which if done correctly was essentially like sliding down a fireman’s pole to the landing platform below. All this would be simple for even slightly experienced ninjas, but due to the fatigue induced by the Sky Hooks Tick Tock and the other previous obstacles Pipe Fitter became one of this week’s deadliest Ninja Killers and even took out some of the top athletes. 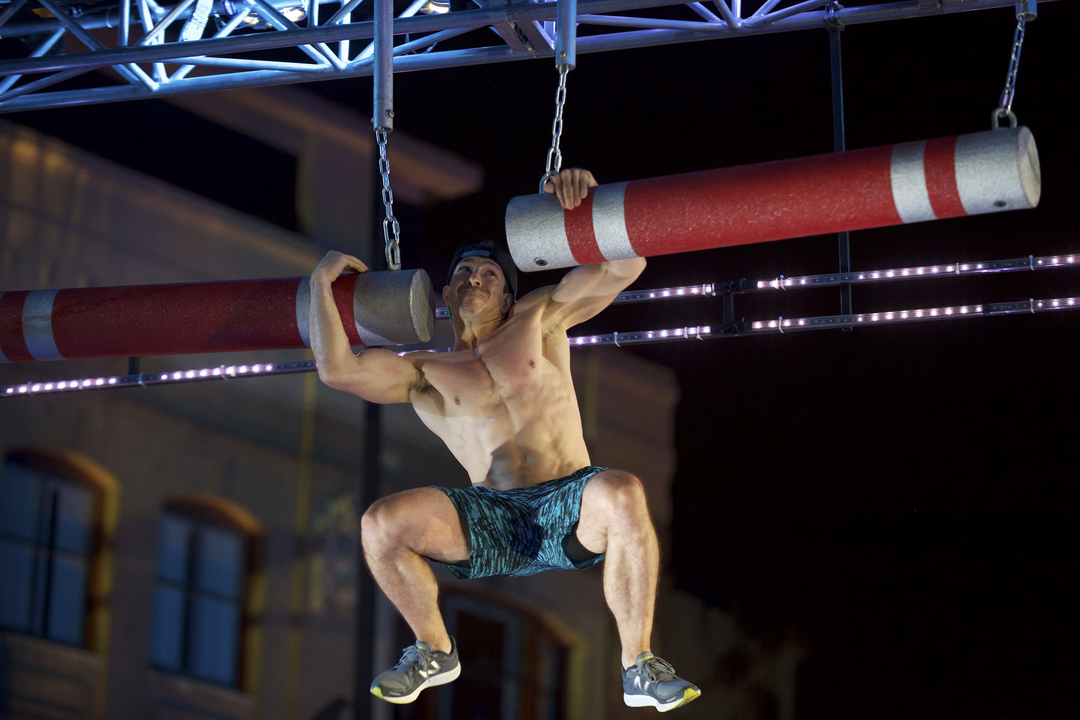 [Andrew Lowes really strains as he opts to simply reach for the third pipe section instead of going with a small lache, there were so many different techniques used on this obstacle, it was almost like every ninja had a different idea as to how to overcome it.]