American Ninja Warrior Season 9 is here! We kicked off with an amazing group of athletes taking on some crazy new obstacles and overcoming some of last year's favorites. As always, I recommend watching the episode before reading these pieces because a lot of what I talk about is results-based and I don't want to be the one who spoils the amazing successes and failures for you.

With my first Stat of the Week I wanted to bring up some big multi-season trends. Last season, I noted how the average city qualifying time appeared to be set for a 6th straight year of growth. Luckily I got that one right!

[This is an updated version of the average city qualifier times graph, I used last season which shows a steady increase in city qualifier completion times, will this year continue the trend despite a fast start?]

The LA City Qualifier's 5th obstacle was the first fan created obstacle we've seen on the show, and it turned out to be the course's Ninja Killer. When I wrote up my Ninja Killer piece this week I noticed a pretty interesting trend, at least it wasn't a trend that's ever jumped out at me before. The obstacle 5th on City Qualifying courses tend to have the lowest completion percentage of any city qualifying obstacle. 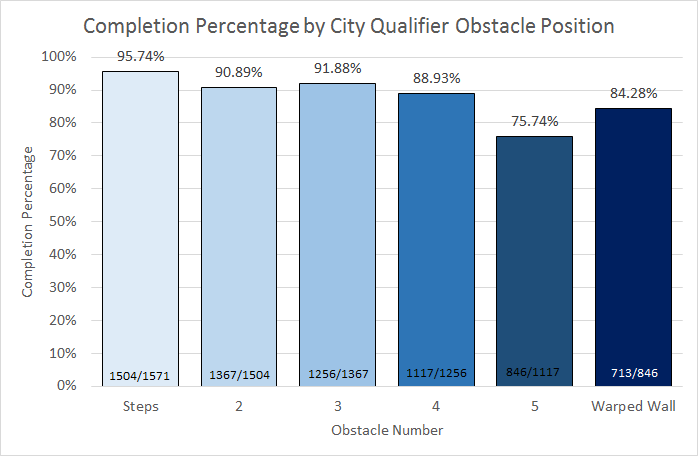 [A graph of the average completion percentage of each obstacle position, the fractions at the bottom of the bars represent the completions/attempts used to calculate the percentages, these numbers are all the aired/annotated attempts of these obstacles, city finals runs are not included.]

I'm sure you could come up with some good rationale to explain this trend. It could be fatigue from completing the previous 4 obstacles. Maybe it is just a coincidence because some of the show's most difficult city qualifying obstacles have been placed in the the 5th slot, Hourglass Drop - Venice Season 7, and Rolling Thunder - Philadelphia Season 8, to name a couple. Or perhaps this is an intentional ploy by the producers, lining up 4 easier obstacles so they can talk about the amazing backstories of their talented contestants, only to really test their might on the 5th obstacle. 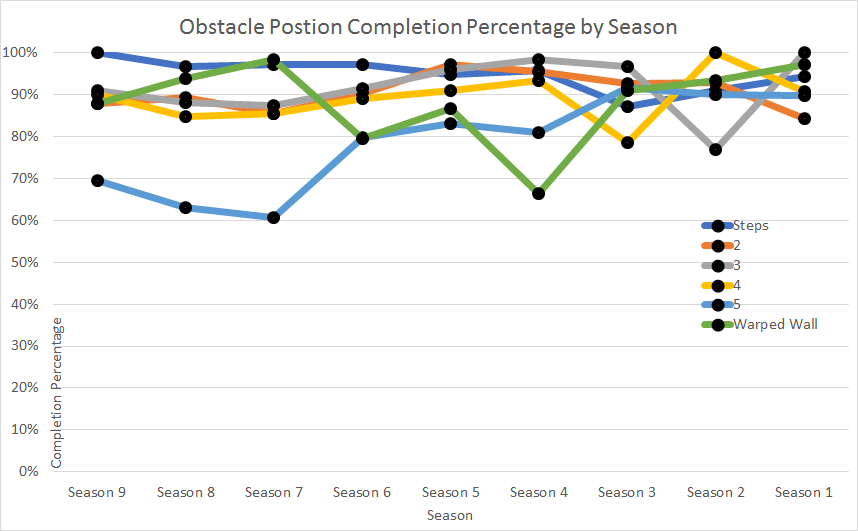 [In this graph the colored lines represent the obstacle position. As you can see the light blue line that represents the 5th obstacle is always near the bottom, and drops even lower around Season 7.]

Interestingly, I found a trend within a trend when digging into this a little deeper. The LA (formerly Venice) City Qualifier's 5th obstacle has an even lower completion percentage than the rest of the cities. 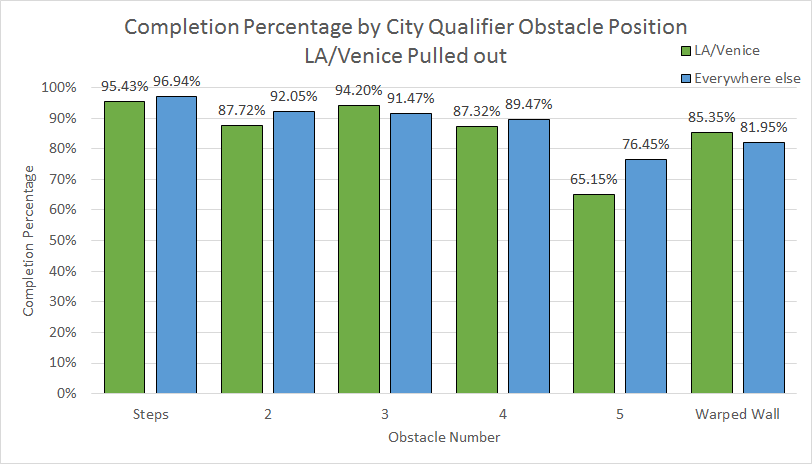 [Everyone has struggled with the 5th obstacle, but the struggle is even more exaggerated when you look at just the LA/Venice City Qualifiers]

I have no good explanation as to why LA/Venice has such a low 5th obstacle completion percentage, some skewing from Hourglass Drop, and the unfortunate nature of being the "guinea pig city" I guess. Intentional or unintentional, fatigue or just a higher skill threshold it looks like the producers put the Battering Ram in a place that makes historical sense.