The National Ninja League National Finals are this weekend!!! They actually started Wednesday with the International qualifier. Which was Live streamed here is part 1, and here's part 2

The complete run order for the massive event is here, it features nearly 50 ninjas who you may recognize from the show!

We expect big things out of these top NNL's regular season ninjas. To read about some drama late in the NNL regular season click here. There will be a live stream for the finals on the National Ninja League YouTube page!

Enough about the adult finals here's what happened in the youth divisions. There are three youth National Ninja League Youth Divisions:

Youth competitions often took place at the same gyms as the adult competitions typically occurring a day before or after the adults.

All season long we've seen some insanely impressive performances from the youngsters, often times with the top finishers besting some of the obstacles that took out many of the adult competitors!

The kids and youth finals were hosted by GCA on Feburary 19th where some of the strongest young ninjas in the country got to compete in front of many of their idols. For the event GCA brought in a ton of big name ninjas like: Drew Drechsel, Joe Moravsky, James McGrath, Ryan Stratis, Mike Bernardo, Brett Sims and Noel Reyes.

For the kids the winners were: Lane Howard for the girls and Jacob Goldman for the boys.

For the Preteens the winners were: Analise Grady for the girls and Vance Walker for the boys.

I couldn't find any videos of the preteen champions, but I did find a video of one of the only 8 preteens to make it through Cannonball Alley on Stage 2. Here's Owen Mathers.

The Teen division's final was held at iCore Fitness last weekend. This competition show cased a ton of truly talented kids who will definitely be names to watch out for in American Ninja Warrior Seasons 13 and beyond.

The Teen winners were: Karter Ohlson and Tyler Behrle.

Here is Tyler's stage 2 run, only he and second place finisher Daniel Vecchio were able to complete this course. The two then battled it out on a stage 3. Tyler was just able progress just a little farther than Daniel earning Tyler the preteen championship.

Congratulations to all the youth division champions and competitors! 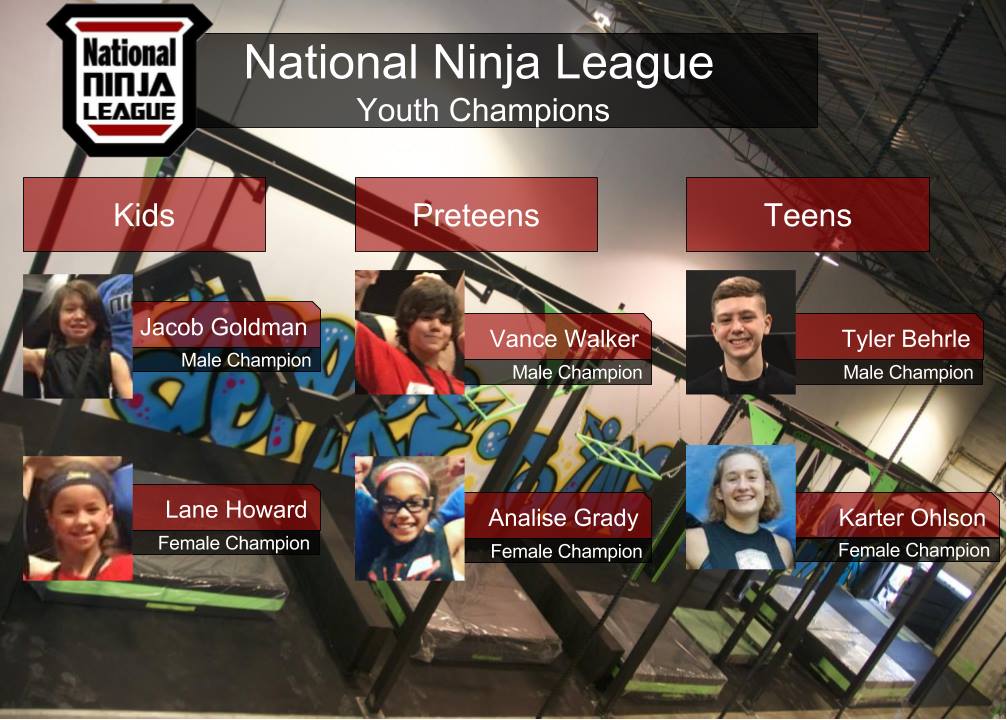 [All the youth division winners!]