In case you've missed the numerous posts about it already, this weekend is the National Ninja League Finals!!! In fact, the action is already underway as the international qualifier took place on Wednesday Night. Here is part 1 of the live stream for that, and here's part 2

Here's a quick update and some back story on the last NNL qualifier of the season at Obstacle Academy from February 18th:

However, for the women the race has been much more dramatic. Including a complete reshuffling of the top two females after a missing event's results were collected. 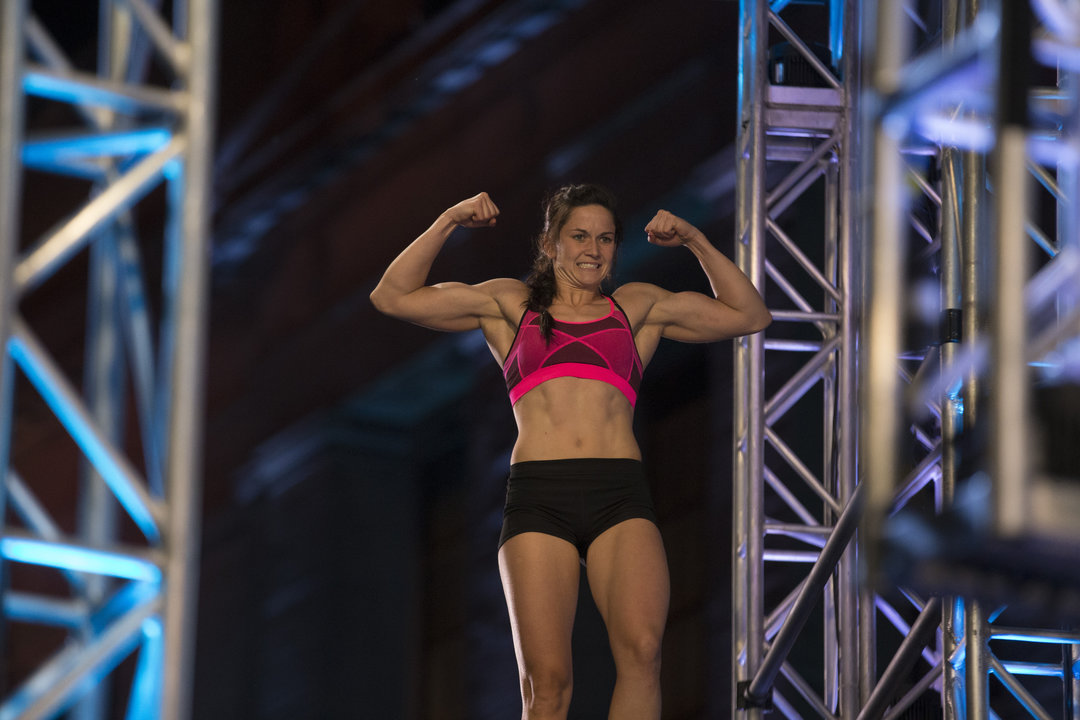 What happened was: Allyssa Beird entered the Vertiquest qualifier (the second to last of the season) leading Jesse Labreck by 5 points. In theory, if Jesse finished in first place and Allyssa finished outside of the top 5 we would have a tie for the top NNL regular season female.

Unfortunately, what was not known at the time the competitors ran at Vertiquest, was that no results were included in the season points from the Pinnacle Parkour Washington Township qualifier.

This was huge because Jesse took first place at that event earning her 5 points that were not previously included, while Allyssa did not compete.

So instead of Allyssa entering with a 5 point lead the two girls competed at Vertiquest deadlocked for first place. At the competition neither girl took home first. That honor instead went to McKinley Pierce (who's 4th in regular season NNL points). Jesse did finish in second, while Allyssa finished in 5th. 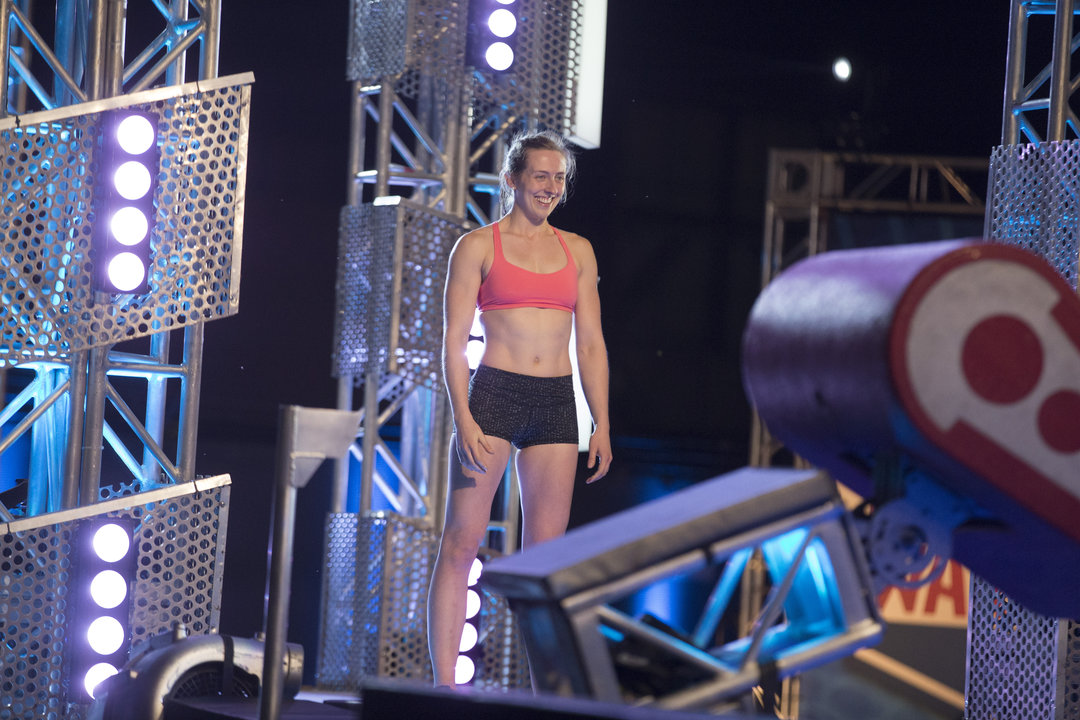 [Allyssa is one of the top female ninjas in the country. She dominated nearly every competition she entered this season.]

At the end of the night, after all the scores were finally included, it was Jesse in first place with 39 points and Allyssa in second with 36 points. That's where we expected the season to end as both Allyssa and Jesse live in the Northeast and neither had a pre-planned a trip to Minnesota to compete at Obstacle Academy.

Upon hearing of the drama that unfolded, all around good guy (and Allyssa's boyfriend), James "The Beast" McGrath booked Allyssa a plane ticket to fly to Obstacle Academy and claim the regular season NNL title. In order to do so Allyssa had to finish in first or second.

She fell on a balance obstacle earlier than she intended but she was the fastest female to that point and earned first place at Obstacle Academy and at the same time earned first in the NNL regular season standings. 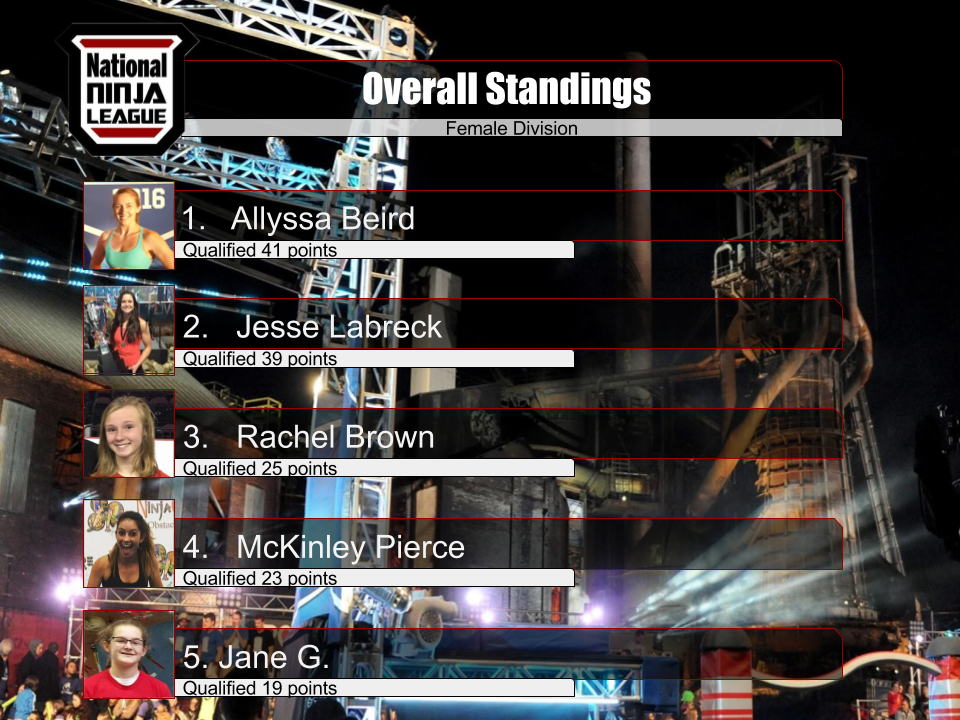 [The final regular season standings for the female ninjas.]

Although we didn't see Enock at Obstacle Academy we did see several known ninjas trying to punch their tickets to Apex in this last chance qualifier. Coming in third, we saw an injured Jake Murray. Jake injured his back before the competition so it was an amazing gritty perfomrance to go out there and battle through a tough course and beat most of a very strong field.

Second place went to one of the lesser known members of the Windy City Warriors, Michael "The Stallion" Silenzi who had just missed qualifying for the NNL finals several times earlier in the season.

First place went to a surprise local Broc Berbout who was the only finisher in a field that included 5 previously aired American Ninja Warriors.

Here's Chris Wilczewski with a video explanation of this post (minus all the links at the beginning).

You can see the full run order for the NNL Finals including nearly 50 ninjas you may recognize from American Ninja Warrior seasons past here.

If you're curious how the youth finals ended click here.

Also don't forget to check out the live stream on the National Ninja League YouTube page if you get a chance this weekend!