Because of this, March 7th is also the last day you can create a fantasy team on ANWFantasy.com that will count for the $250 contest.

Since I'm sure many of you have questions here we go:

- ANWFantasy is basically fantasy sports for American Ninja Warrior. You pick a team of the 5 ninjas you think will go the furthest the fastest in Season 9 and you earn points based on the obstacles and stages they complete. Each of your 5 ninjas scores are added together and the fantasy team with the most combined points at the end of Season 9 is the winner. Here is a complete breakdown of how it all works.

[Above is a complete breakdown of how ANWFantasy points are awarded, for the complete rules go to the How it Works tab]

As a fun way to spice things up we will be awarding a $250 prize to the fantasy team, submitted on or before March 7th, that scores the most points this season (see complete official rules here).

Why do I have to make my team before March 7th? Episodes won't even air until June!?

In order to be eligible for the prize, teams must be submitted before filming begins, March 7th (late at night). Once filming has started people who are at the filming will know some results, thus giving them an unfair advantage. As such, only teams submitted on or before March 7th will count for the $250 prize.

How do I make my fantasy team? I know American Ninja Warrior better than anyone!

It's easy! Just go to ANWFantasy.com and click Sign Up (or Login if you're a returning player from last season, or any of our NNL fantasy games). Enter your name, email address (we will only contact you about ANWFantasy results and your email will not be given to any other site), a clever team name (Crimpin' aint easy and Got Cantaloupes? - a reference to Geoff Britten's forearms, were a couple of my favorites from last season), and the names of the 5 ninjas you think will go the furthest the fastest this season.

There is one final box that requires you to guess how many points your team will score, we will only use this only in the event two teams tie for first place, in which case we will declare the winner the individual whose score guess is closest (higher or lower) to their actual score. 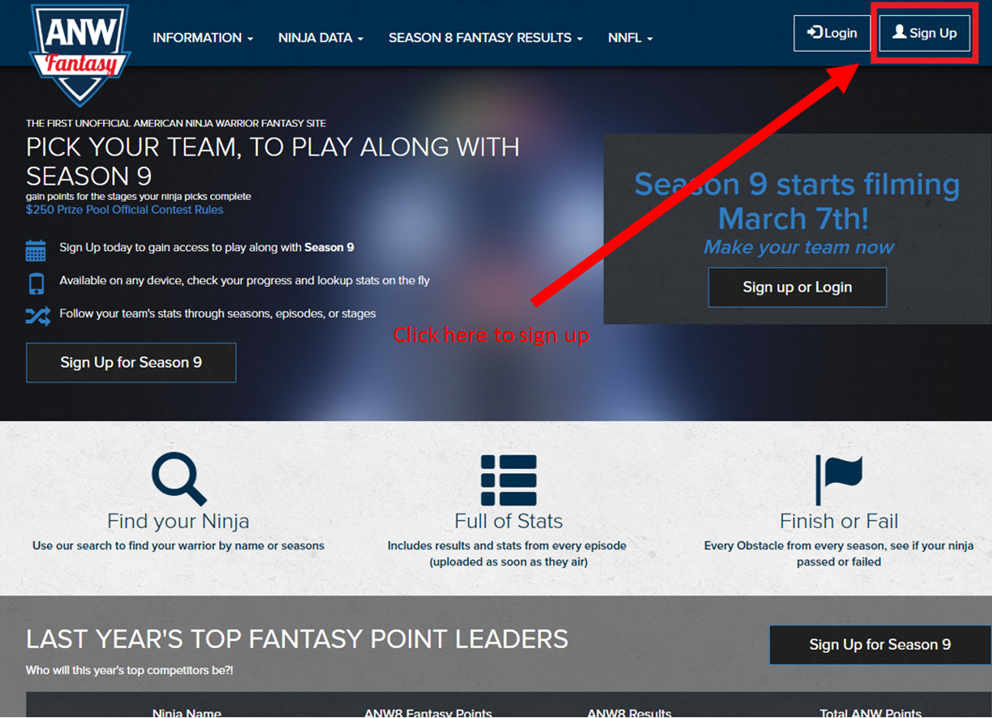 How do I decide who to pick?

-In case you're new to American Ninja Warrior or just can't pick between a few of your favorite ninjas we have provided a wealth of stats and results from all 8 past seasons to help you make informed decisions. On the sign up page you will see a large black button in the middle which says, "View List of Ninjas." A list will pop up with all the ninjas who have ever been aired or annotated on the show, you scroll through this list and see who performed the best last season.

However, if this is not enough ninja info for you we also have a database of all the aired runs in the show's history. Additionally we have some tailor made ninja statistics that should help even the biggest analytics nerd chose the best ninjas. 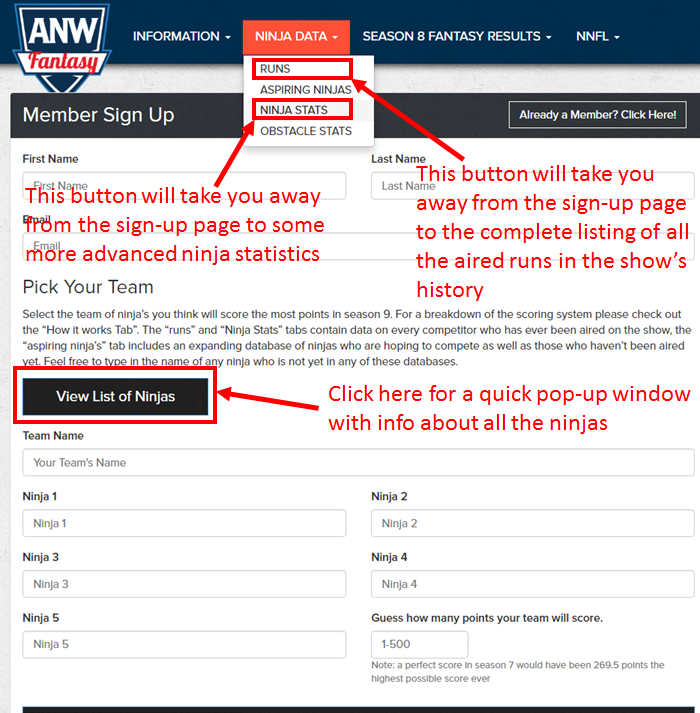 [The view list of ninjas button provides some quick reference information in a searchable pop-up list, for those who want even more information check out the Runs or Ninja Stats sections in the Ninja Data drop down.]

What if I want to pick someone who hasn't competed in the past?

You can type any name you want into the ninja fields, so whether your pick is an 8 time veteran or an unknown rookie, simply type their name in one of the 5 ninja slots. We even have a database of ninjas who have not been aired on the show but are hoping to do so one day. 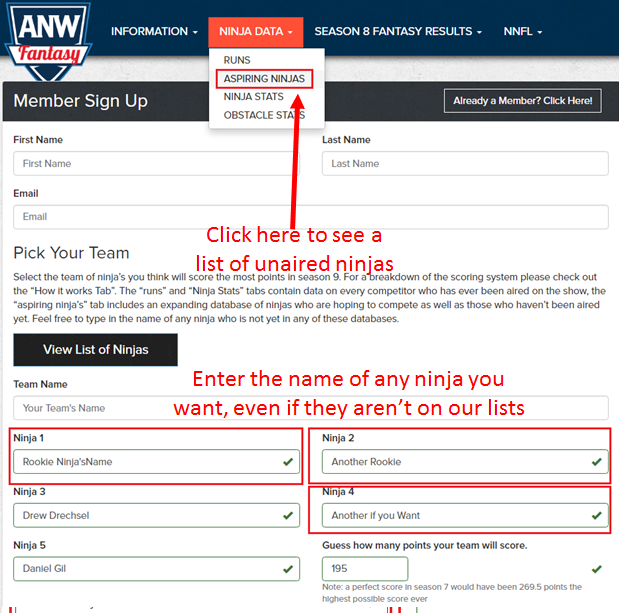 [Some of the best ninjas every year are rookies, maybe you know who be the nice break out rookie, if so enter their name into the ninja boxes!]

Can I make a team after March 7th?

Of course! Fantasy teams will be accepted until the Vegas Finals are filmed, which usually falls somewhere during the airing of city qualifier runs. However, any team submitted after March 7th will only be included in our "general pool" which is not eligible for the prize.

I'm looking at last year's fantasy scores and they're so low? What gives?

Last year we used our old scoring system, where the only way ninjas scored points was by clearing stages.

What else is on ANWFantasy.com?

ANWFantasy.com has a ton of information and statistics about American Ninja Warrior, including: the results for every aired an annotated run in the show's history. Some custom ninja statistics such as how many obstacles each ninja has completed and the average number of obstacles a ninja completes each season they compete. And many more data sets.

ANWFantasy.com has also partnered with the National Ninja League, where during the heart of the NNL season we host small fantasy games for each event where the winner takes home a cool ninja T-Shirt. Also, as part of our National Ninja League partnership, we include run results for as many competitions as we can.

If you have any further questions about ANWFantasy feel free to leave a comment here or send me an email at ANWFantasy@gmail.com