The NNL Finals are already going to be one of, if not the largest collection of elite ninja talent outside of the the yearly American Ninja Warrior National Finals in Las Vegas. In fact, one could argue that the field competing in California in 2 weeks is even more talented than your traditional Vegas finalists.

These are the top 3 ninjas from each of over 30 events, meaning: more ninjas tried to qualify (actually attempted a course, not just submitted a video) for the NNL Finals than the American Ninja Warrior Vegas Finals and fewer actually qualified.

But I've gotten ahead of myself, the finals are still 2 weeks away! For now, let's focus on Obstacle Academy and the exhilaration that will go down this weekend. As I mentioned in last week's recap of the previous week's action (so the event that was roughly 2 weeks ago at Classic City), the guys who manage and coach at Obstacle Academy are beasts. 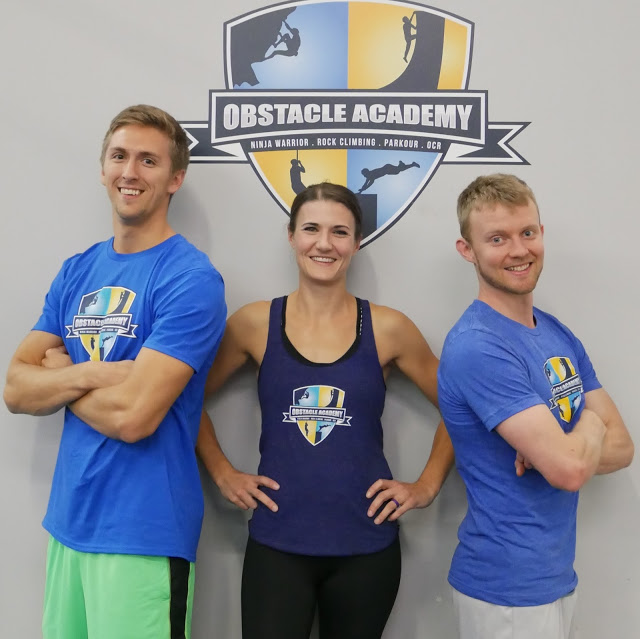 [From left to right: Kyle Soderman, Sarah Schoback and Hunter Guerard are the ninjas behind Obstacle Academy, and they're all super strong athletes.

Alright so we have a newer Ninja Warrior gym, that has tons of cool obstacles (and an official EuroTramp - the same kind they use on the show), run by three already qualified ninjas, hosting the last qualifier of the season, which is sure to entice tons of top ninjas. What can we expect? 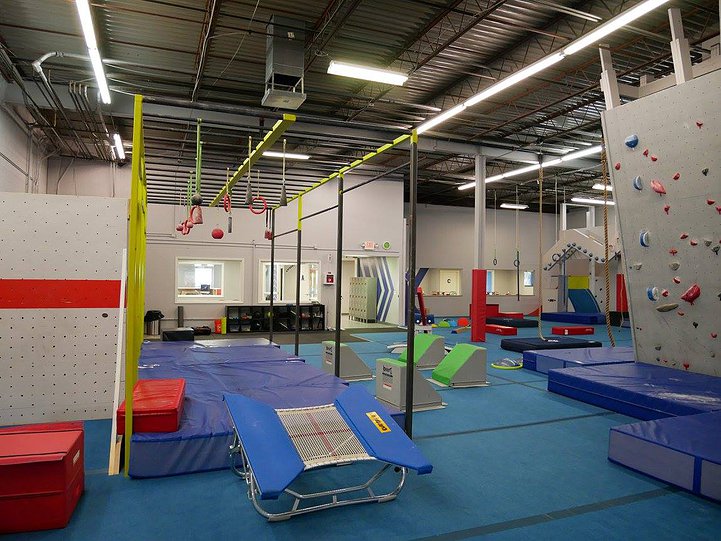 [Just a small peak at some of the many challenges Obstacle Academy could use to test ninjas next week.]

In speaking to Kyle, he mentioned that they have built multiple brand new obstacles just for this qualifier. He also told me, the only athletes who will be able to complete the course are those with: Great finger strength, excellent arm strength, spectacular balance, and who excel at both dynamic and static movements all while having a well thought out strategy to take on every obstacle individually and the course as a whole.

So basically, this is going to be one super hard qualifier, which should be the perfect thing to push the elite ninjas we expect to see this weekend.

The list of previous American Ninja Warrior finalists who have already qualified for the National Ninja League finals is absurd. Yet, there are still some big names who have yet to qualify and will be trying to do so this weekend. A couple of those guys to watch out for are Jake "Corn-Dog in the Fanny Pack" Murray and Abel "The inspiration to us all" Gonzalez. 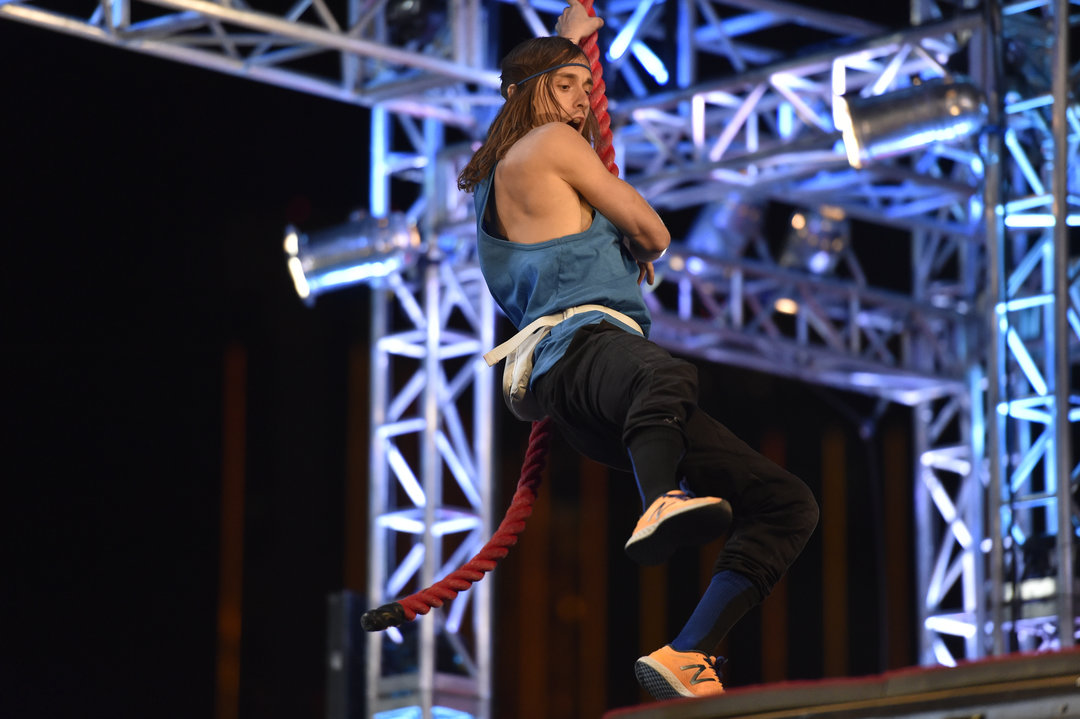 However, overcoming Kyle and Hunter's brutal course isn't the only obstacle these veteran ninjas will have to concur. They'll have to beat an elite field of ninjas including: Three American Ninja Warrior Season 8 rookies: Drew Knapp, Eric Middleton, and Andrew "Roo - The K-9 Ninja" Yori who each cleared the Indianapolis city qualifier, and the latter two even qualified for the Vegas Finals.

A couple lesser known locals that all these American Ninja Warriors will need to watch out for are Broc Bebout and Tyler Smith who have done well at past Obstacle Academy competitions. Oh, and since its an NNL event you can expect Ernest "Enok - The People's Ninja" Phillips to be there, even though he already sealed the deal and finished as the top ranked male in the NNL regular season. 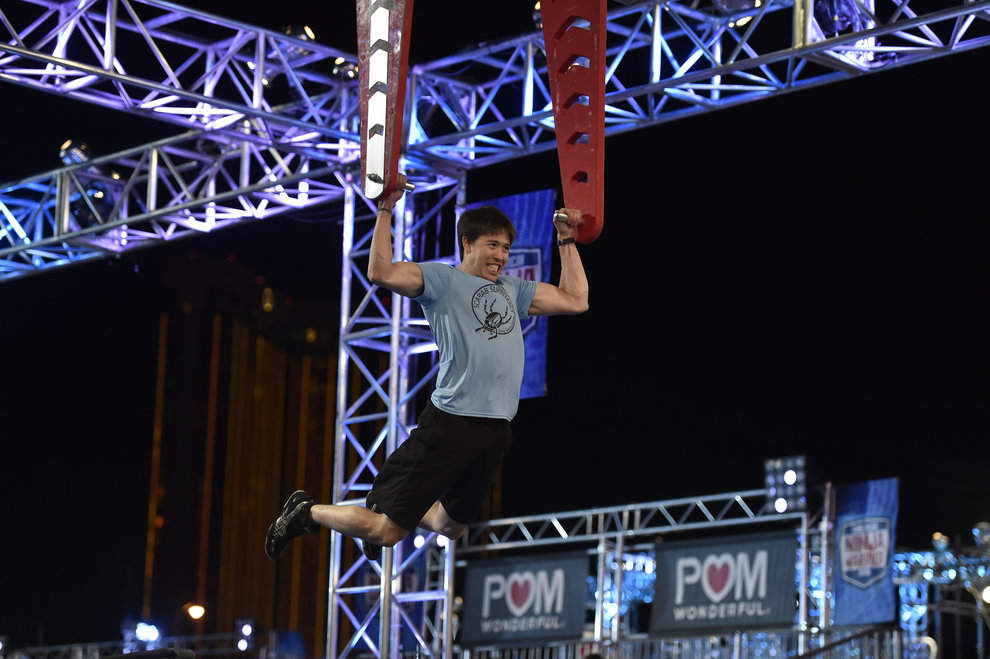 [Although Jake and Abel are both Stage 2 veterans, there are several other strong ninjas competing at Obstacle Academy, including Eric Middleton who reached the Flying Squirrel last season.]

First off, at Vertiquest we saw Ernest Phillips secure his NNL regular season title with a third place finish. We also saw Noel "The Rapping Ninja" Reyes take home first place. This was Noel's third, first place finish of the season and earned him enough points to tie with Ethan Swanson for third overall. 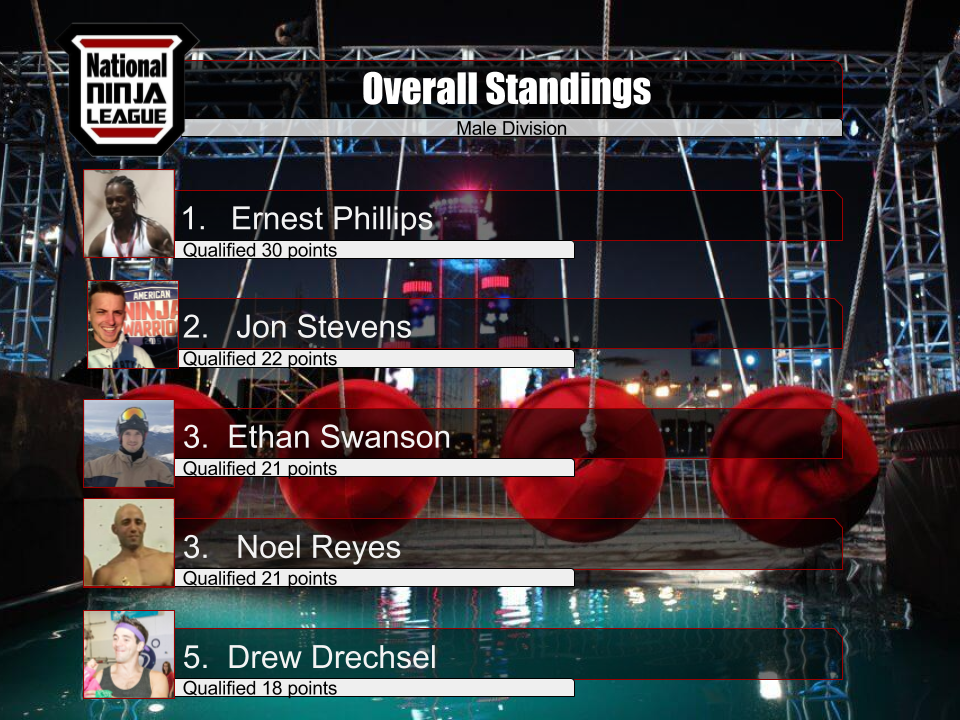 [With an 8 point difference between Ernest and Jon, Ernest has secured the regular season title, no matter what happens at Obstacle Academy.]

Last week, I went into this long explanation how if Jesse Labreck finished first and Allyssa Beird finished outside the top five they would actually be tied for the most regular season points. Unfortunately, what I didn't know was the standings I based that statement on were actually missing the results from an earlier event (Pinnacle Parkour Washington Township - I'm looking at you) which Jesse took first in and Allyssa did not compete in.

So what all this confusion does mean is: Allyssa and Jesse both entered the competition last week at Vertiquest with 35 regular season points (you get 5 points for each first place finish, 4 for second, and so on) making Vertiquest a true winner take all match up.

So who came out on top? Well at Vertiquest it was the regular season's fourth place ninja, McKinley Pierce who went further than any other female!

In the battle for regular season supremacy Jesse came out on top with her second place finish, while Allyssa still had a strong showing placing 5th. Technically this means that if Allyssa wants that regular season title she could head to Obstacle Academy and try her luck this weekend! 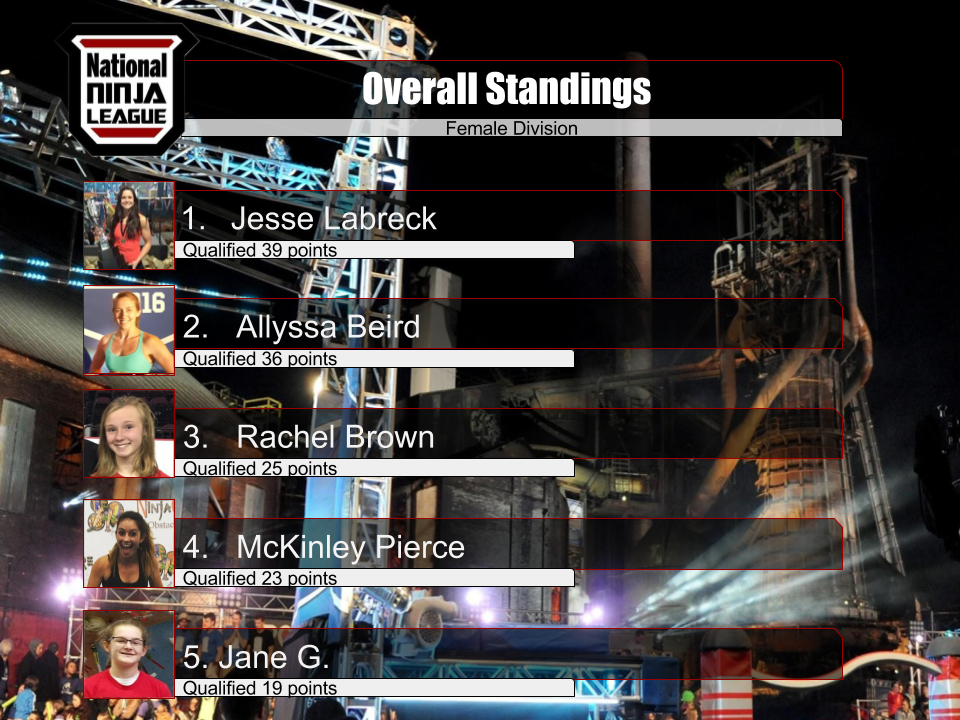 [The current regular season standings for the ladies, there is one week left though!]

At Warrior Sports we had a shocking podium, which consisted of three brand new names to both American Ninja Warrior and National Ninja League Fans! Cody Ratterman took first, Garret Takach second, and Mitch Vedepo third. The first familiar name to fans of the NNL shows up in fourth, as Sean Noel followed up his first place finish a couple weeks ago at Classic City with another strong run.

Speaking of following up one strong performance with another, Kristi Pratt went out and did her thing, grabbing first place for the second week in a row. Rachel Brown, the overall third place female ninja, also turned in a solid performance finishing in fourth place at Warrior Sports, not a bad regular season for anyone, let alone a 14 year old! 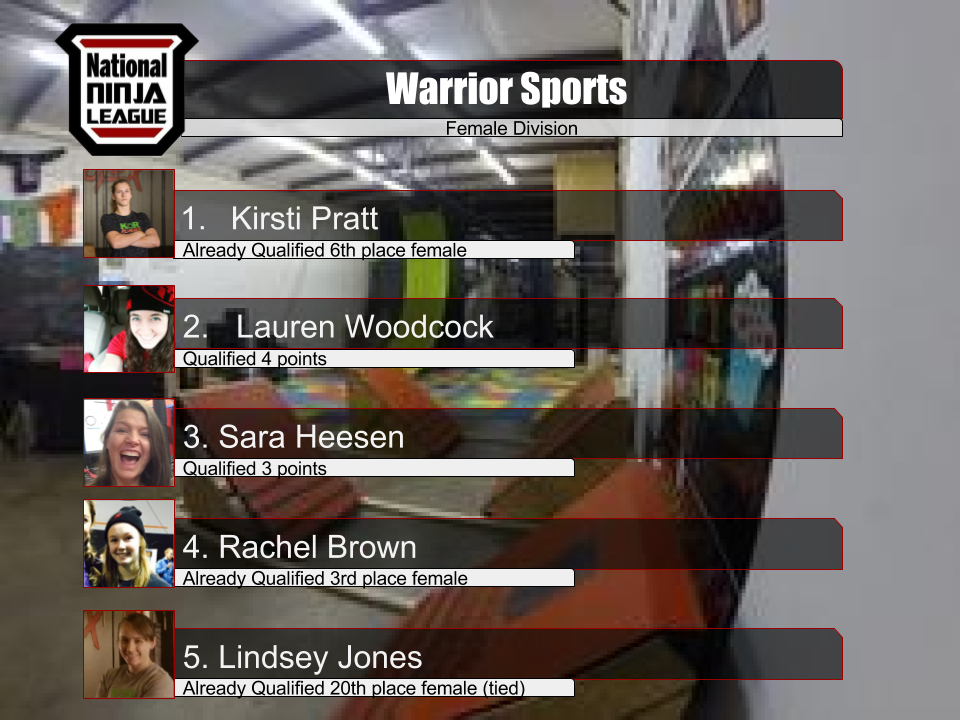 Unfortunately Chris Wilczewski has not put out his weekly preview/recap video yet, meaning there is no video version of this post.

I am happy to announce that ANWFantasy.com is set up for season 9, go there and make your team now! Entries submitted before the first night of filming, March 7th are automatically entered into a prize pool where the winner takes home a cool $250!