Monday night concluded stage 1 of the American Ninja Warrior national finals and we continued to see shocking exits from experienced veterans. Only 17 ninjas were able to complete the brutal course, leaving 73 ninjas defeated by the grueling obstacles of this redesigned stage. Of the 90 ninjas who took on stage 1, 69 runs were aired/annotated over the past two weeks. For consistency with the rest of my historical data, I will be using those 69 aired/annotated runs for my stats. Here's a list of the results for the rest of the stage 1 ninjas.

Last week we saw the first 35 finalists take on stage 1, where the Giant Log Grip proved to be the Ninja Killer, taking out 19 of the 26 ninjas who attempted it. The distribution of ninjas falls were pretty even across all 8 obstacles this season and for only the second time in the modern era (Mt. Midoriyama in the U.S seasons 4-8) every obstacle took out at least 1 ninja (last year was the only other time).

Technically Flying Squirrel did have the lowest completion percentage of any stage 1 obstacle this season (68%), but this is due in part to ninjas timing out on the final climb and not entirely on the difficulty of the obstacle on its own. Don't get me wrong, Flying squirrel was still a very tough obstacle placed at the end of an exhausting stage 1. Here's Alex Weber going over all the numbers you need to know as to why this obstacle was so tough. 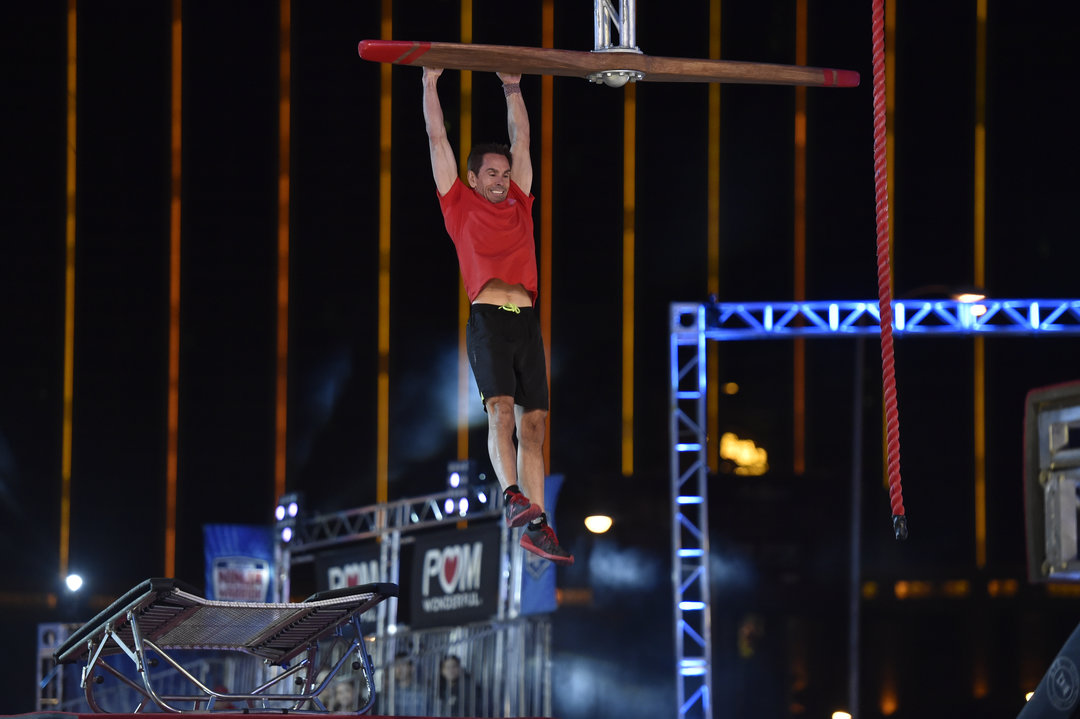 [Jon Stewart was unable to get enough bounce to get his arms all the way around the propeller, and was never able to recover.]

Before Propeller Bar the second obstacle of the Modern Era Stage 1 was the Giant Cycle. Which also required a trampoline jump but was much more forgiving as the cycle could be grabbed at a wide range of different heights and lengths. 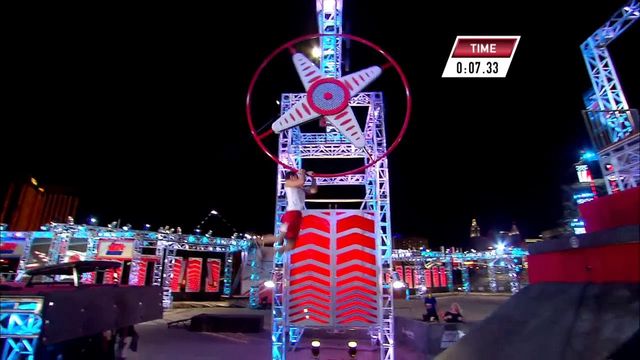 [Here's a still of Sasuke star Hitoshi Kanno taking on the Giant Cycle during America Vs. Japan special as part of Season 5.]

Comparing these two obstacles in terms of average completion percentage we see that Propeller Bar is much more difficult, eliminating 13.77% more competitors on average. 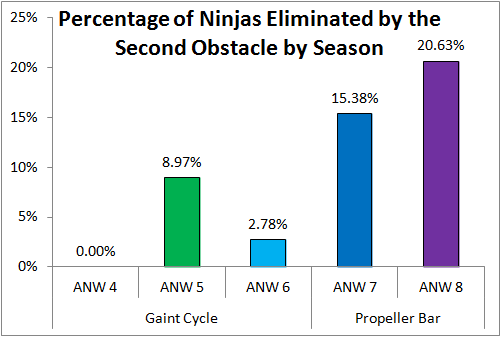 [A comparison of the percentage of ninjas eliminated by the second obstacle of the national finals since the start of the Modern Era (Mt. Midoriyama in the US). The Propeller Bar has definitely been the more difficult second obstacle.]

With 27.53% (19/69) of ninjas eliminated by the first two obstacles it's no surprise this season featured the fewest stage 1 clears in the Modern Era.

As Nikki alluded to the real Ninja Killer for stage 1 is the mini-trampoline. Three obstacles on stage 1 prominently feature trampolines, Propeller Bar, Jumping Spider, and Flying Squirrel. All of the aired ninjas were able to grab the Flying Squirrel without much problem. So if we focus on Propeller Bar and Jumping Spider we see an astounding 21 were taken out by trampoline obstacles on stage 1 this season. This means that 40.38% of the field who were eliminated on stage 1 were eliminated by an obstacle that involved a trampoline. Last year, again we saw 21 ninjas taken out by these two obstacles (9 and 12 respectively) however, that was 21/41 total ninjas eliminated on the course, or 51.22% of ninjas eliminated were eliminated by trampolines.

For the most part, the hardest aspect of both the Propeller Bar and Jumping Spider is getting the correct bounce off of the mini-trampoline. The Propeller Bar requires upward lift, high enough for ninjas to get their arms around the awkward propeller. Jumping Spider is a little more involved requiring both height and distance, followed by the much more technical wedging of the ninjas body between two walls.

It is true these obstacles have more nuances than just correctly hitting the mini-trampoline, just ask Mike Bernardo who was awkwardly spun into the water by the Propeller Bar or Karsten Williams who lost his footing and became unwedded from the Jumping Spider. However, these ninjas are the exceptions as most of the ninjas taken out by these two obstacles were done in by simply not getting enough bounce.

The mini-trampoline is an essential skill for any ninja. At least one appeared on every city course this season, in addition to the 3 we just saw on stage 1. If you tuned in to the Ninja Warrior Labor Day Marathon you were sure to have seen many mini-trampolines there too, as mini-trampolines have been a part of ninja competition long before it was ever brought stateside.

Here are Brian Kretsch and Sean 'The Papal Ninja' Bryan with a quick trampoline how to video. If you're looking for even more trampoline technique here's Sean's more detailed technique video. Lastly, if you're looking to taking your trampoline training up a notch and want to buy the same mini-trampolines used on the show, just be warned they cost in the ball park of $1,000!