There was one large red wheel that was the main reason for the futility from the Philly ninjas. Rolling Thunder was by far the most ruthless Ninja Killer of the qualifying rounds, boasting just a 28.13% completion rate! The second lowest from a city qualifying obstacle in the history of the show, just trailing the Hourglass Drop, 21.21%, again from Venice last season.

Every city finals course so far this season has featured 3 minor tweaks to city qualifying obstacles to make them even tougher. However, that was not the case Monday night. I'm not sure what the justification was (I would guess since this course featured the fewest clears they wanted to see some more ninjas make it to the back half?) but nonetheless only one obstacle was tweaked for the city finals.

Aaaaannnnd of course it was Rolling Thunder! Now during the broadcast Matt mentioned that they, "added more plexiglass barriers" which isn't entirely a true statement. Yes technically, there were more barriers, 3, than there were in qualifying, 2, but the barriers were entirely different.

In qualifying the barriers extended from spoke to spoke, forcing ninjas to skip entire sectors of the wheel. Whereas the barriers in the city finals only took up half the distance between the spokes, which forced ninjas to make a bigger move than if there were no barrier, but a much smaller move than in qualifying.

So although Akbar said, "The more plexiglass throws your rhythm off," I actually think this obstacle was made easier. Which is completely understandable because ninjas still had to move the 24 foot 100+lb wheel down the track from underneath it! Full barriers, half barriers, whatever. It's still a SUPER difficult obstacle. As evidenced by the fact that it still took out 6 extremely strong city finalists Monday.

All this talk about how tough the city qualifier and Rolling Thunder were and I'm still yet to mention the most infamous stat from the Philly finals: Zero ninjas completed the whole course! I'll talk more about this in my Stat of the Week piece, but from a Ninja Killer perspective, this means one obstacle had a completion percentage of 0%. Something that has previously only ever happened on Stage 3.

That obstacle was none other than the Invisible Ladder. The Invisible Ladder has become the staple 10th obstacle, appearing on every city finals course for the last two seasons. In that time it has a combined completion percentage of 64.7% (22/34).

Historically (seasons 1-4) the 10th city finals obstacles were rope ladder climbs which were essentially un-fail-able, 100% completion rate (111/111). This changed in season 5 when city finalists were required to spider climb 30 feet straight up to the buzzer.

Although the Spider Climb was a little more difficult it was still a relative gimmie for ninjas talented enough to make it there with a completion percentage of 91.9% (57/62). Making the Invisible Ladder by far the hardest 10th city finals obstacle we've ever seen.

[The completion rate of the 10th city finals obstacle has dramatically decreased.]

However, the Invisible Ladder only took out 2 ninjas Monday night, so it was far from the Ninja Killer. The obstacle which took out the most ninjas was the brand new Stair Hopper. 10 ninjas were able to make it to the Stair Hopper, yet only 2 were able to complete it, a completion rate of 20%.

[I've used this table a lot but, 3 of the 7 most difficult city finals obstacles have come from this season! Stair Hopper ties for the 4th most difficult.]

All while staying balanced on top of the 3.5 foot wide frame metal frame, yes that leaves ninjas just 3 inch margins of errors on both sides. Oh and did I mention some of the "stairs" are open so the bar can slip right out if they aren't careful? This diabolical obstacle requires the perfect combination of precision, control, and power a nearly impossible combination to muster after 8 other taxing obstacles. 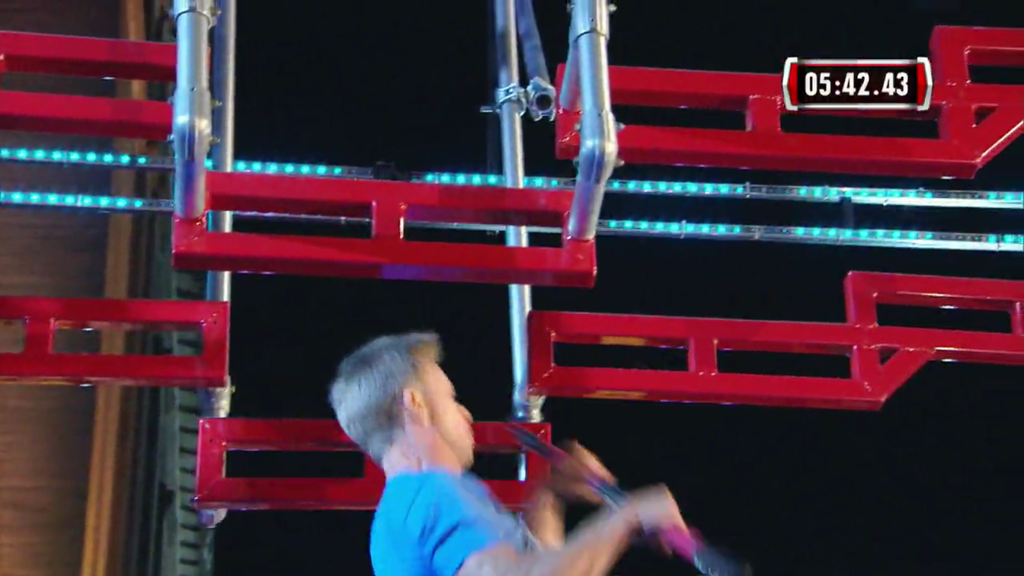 The Philly city finals were one long knock-down-drag-out fight that beat down some of the shows most accomplished ninjas. With the fatigue inducing Rolling Thunder, the scrupulously technical Stair Hopper, and the always arduous Invisible Ladder, the Philadelphia city finals was a gauntlet of Ninja Killers. It will go down in history as the first time no ninja cleared a city finals course.