For those of you who may have forgotten here's how the Atlanta city qualifier stacked up from a numbers perspectives:
It had the highest number of completions this season, 27 which actually ties for the 7th most all time with the Northwest Qualifier in season 4 (trailing only: Kansas City Season 7 - 38, Miami Season 6 - 42, Denver Season 5 - 48, Season 3 - 40, Season 2 - 42, and Season 1 - 34).
The Big Dipper returned as the Ninja Killer for its second straight season, this time taking out 18% (9/51) of the Atlanta Ninja hopefuls who attempted it.

Again, much like last week, some minor adjustments were made to the "first half" (the city qualifier obstacles):
The Big Dipper's track was made longer and the cargo net at the end was removed, causing ninjas to control their bodies for even longer flights.
Block Run had one block removed, requiring more precise footwork.
The Pipefitter's first pipe was made more vertical while the central hanging pipes were tightened making them move less and taxing ninjas more!

Although these changes didn't seem as drastic as those in the LA qualifier it did feel like the "first half" obstacles were tripping up significantly more of these talented city finalists than they were in qualifying. To the point where the guys over at NinjaWarrior.info (@NinjaWarriorWeb on twitter) asked me to look into whether or not there has ever been so many ninjas who finished the qualifying course who failed to get to the "back half" (the new city finals obstacles). Which brings up a point if you ever have a pressing American Ninja Warrior question, let me know on twitter (@ANWFantasy) or Facebook and I'll see if I can come up with the answer!

This formula essentially tells whether city qualifying obstacles were easier (negative value) or harder (positive values) for city finalists the second time around, with the size of the percentage representing how much easier or harder the obstacles were. The Atlanta city qualifying obstacles saw an increase in difficulty of roughly 15% for city finalists, this is the 4th largest increase in difficulty the in the past two seasons with 7 falls before the "back half" despite 27/30 city finalists completing the whole course. The largest increase in difficulty for city qualifying obstacles in the past two seasons according to this metric were in Miami Season 6, where 18 ninjas failed the reach the "back half" despite 42 ninjas clearing the whole course in qualifying. 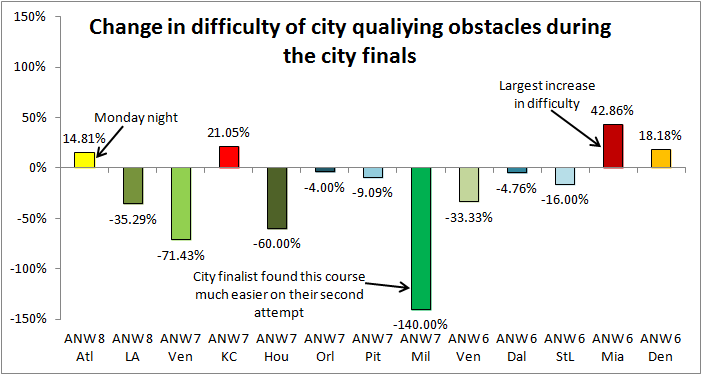 So the "first half" was definitely harder than in qualifying, but the real Ninja Killer was the Floating Monkey Bars. Yet another obstacle that boasted Ninja Killer honors last season in the Pittsburgh city finals with a completion rate of just 43.75% (7/16). Oddly enough the completion rate this season was identical to last year, again just 43.75% (7/16) of the ninjas were overcoming this playground monstrosity. 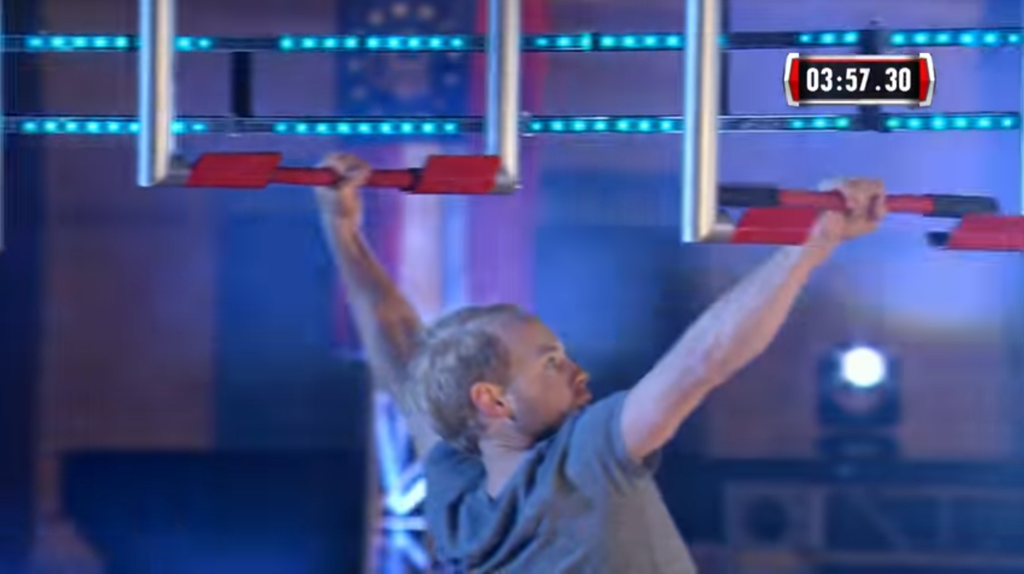 [Brett Sims perfectly places the bar as he cruises through the Floating Monkey Pegs.]

The monkey bars are a fun play ground structure that we've all played on as kids, so why are the floating monkey bars so difficult? It's all because of the finesse, and precise placement of the bars. Each move on this daunting obstacle requires a ninja to hang from one arm (usually not too bad for this caliber of ninja) and shift their body weight forward with just enough momentum so that their arm is able to gently place the bar into its cradle. Swing too hard and it'll be difficult to be precise, swing to little and you pendulum backwards having to bear your entire body weight plus the negative momentum on just one arm. Oh and you have to do this precision move 4 times to complete the obstacle (although most ninjas opted for the lache after 3 moves).