Terrible pun aside, Season 8 is finally here! Before I go too far, this is going to be recap so there will be spoilers. Hopefully, there will also be some numbers that shine new light into the results of Wednesday's electric season premiere.

Stat Of The Week:
City Qualifying courses are getting longer. Okay that's technically a statement not a stat, and I don't know about the physical dimensions from end to end of all the city qualifying courses (although the roughly 35° turn from the Floating Steps into Tick Tock was definitely a first). What I mean is: The average time to complete a city qualifying course has increased each season, since Season 3. Wednesday the average completion time (ACT) for the 17 ninjas who cleared the course was 232.04 seconds (or 3:52.04). This is more than double the ACT of every season prior to ANW 6. Additionally Wednesday's ACT was nearly a full minute longer than the combined average for all cities last season, 173.78 seconds (2:53.78).

I know the sample size is small and the season just started but, the ACT of Wednesday's course is actually longer than the ACT for all City Finals courses before season 6.

With season 4, rules changed and not just the top 30 City Qualifying finishers advanced to the City Finals. This means a rushing element is no longer there, but still, City Qualifying courses are getting longer.

Technically last season there was a City Qualifier with a longer ACT than Wednesday's, suggesting maybe Wednesday's results are an outlier and ANW 8 will break the trend and have a shorter average completion time than the ANW 7, but it's unlikely.

Oh, and the ANW 7 City Qualifier with the longer ACT was the Military region, what obstacle appeared on both Wednesday's course and Military region's? The I-Beam Cross.

[Comparison of average completion times for all ANW 7 City Qualifier courses, n values equal the number of clears in a given city and thus sample size. There's a clear intra-seasonal trend we'll look into another time!]

Ninja Killer:
The Quintuple Steps added height differences and some wonky angles becoming the Floating Steps, while the Warped Wall grew 6 inches. In between these there were two new obstacles, Tick Tock and the Escalator, however, it was the returning obstacle that was the Ninja Killer. Of aired/annotated runs only 19/27 ninjas who attempted the I-Beam Cross completed it. A Completion rate of just 70%. As difficult as it was Wednesday the I-Beam Cross was actually more grueling last season when only 10/26 ninjas who attempted the obstacle completed it. It's completion rate was the second lowest among new City Qualifier obstacles last year, 38.46%, only the Hourglass Drop's was lower, 21.21%. 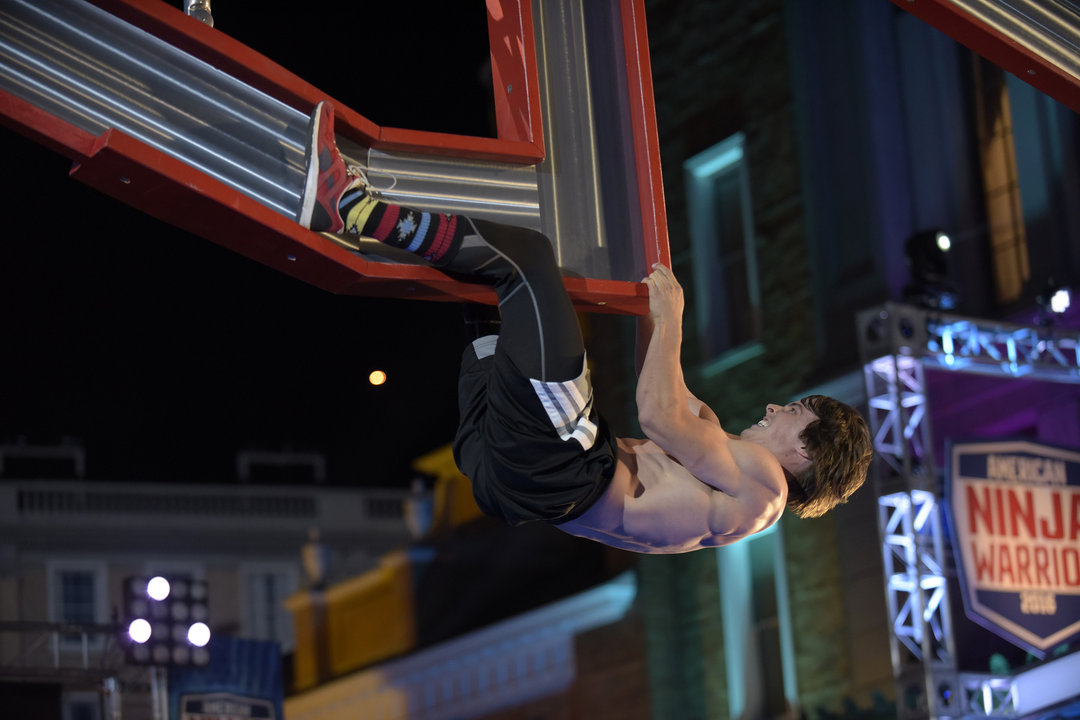 [Scott Willson tries to ascend the second peak of the I-Beam Cross. ]

So why is the I-Beam Cross so challenging for ninjas? Wednesday Matt and Akbar gave us some numbers explaining how tough this obstacle really is. As a whole the beam stands an impressive 35 feet long. Ninjas first must climb several feet straight upwards before going inverted and traversing over the water below. While upside down the ninjas must use ledges of vary lengths (1-2inches) to keep themselves secured while progressing forwards. Roughly half-way through comes the real challenge, where ninjas must contort their body's and climb another 3 feet upwards. From here things don't get easier. After summiting the second peak all the ledges narrow, leaving several feet of just 1 inch ledges.
Tack this onto the fatigue inflicted by the first four obstacles and you have one devastating Ninja Killer.

Fantasy Update:
(Fantasy Ninja? - What's that? Check it out here, some behind the scenes creation here, It's not to late to make a team!)
As I mentioned above 17 ninjas cleared Wednesday's course, that means 17 ninjas scored at least 1 fantasy point for their owners (Rules). Well that would have been true, however, only 4 of these 17 ninjas were selected on fantasy teams.

[Kevin Bull Celebrates after posting the fastest time of the night!]

Fantasy players chose wisely this week as 44 selected Kevin Bull. Bull earned himself a 0.5 point bonus for posting the fastest time of the night. He finished a full 20 seconds faster than the next fastest finisher, Flip Rodriguez. Wednesday's run makes him just the 4th ninja to post the fastest City Qualifying time in back to back seasons (Joining Drew Drechsel 5-6, Elet Hall 5-6-7, and Lorin Ball 6-7). Bull is also a 2 time Vegas Veteran. He advanced to Stage 1 in his rookie season, and was one the 8 finalists to make it all the way to Stage 3 last year. 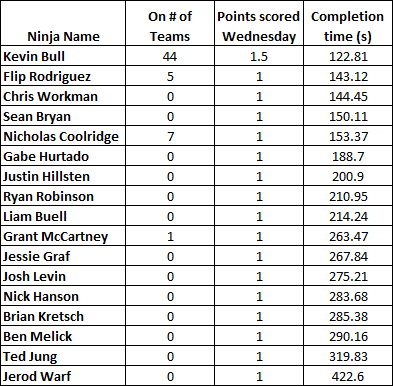 Some quick Stats:
The 17 clears falls just below last season's city qualifier average of 19.5.
The "California Region" had 18 clears in ANW6, and 17 in ANW5. Ignoring last year's 7 clears, it's been a very consistent region.
Venice Beach hosted 7 City Qualifier/Finals in each of the first 7 seasons, but not one this year :(
3 People named Jess(i)e qualified for City Finals - I haven't double checked it, but that's got to be some sort of record.
And of course 2 women qualified for City Finals in the same city (more on that here)!!!

[Below are all the ninjas who cleared Wednesday's course. Kevin Bull had the fastest time and Jessie Graff was the only female Finisher]