Weekly spoiler warning! Jumping right into things this week, so don't even read the next line if you haven't watched the Oklahoma City Qualifier.

This week we saw a some of the most shocking results of the season! Lance Pekus, Sam Sann and even Mighty Kacy Catanzaro, three highly accomplished ninjas, who've all cleared city qualifying and city finals courses in the past, were taken out by just the third and fourth obstacles. Admittedly both of these obstacles were doozies, we'll be getting into them more later.

While we were shocked by the veterans, we were inspired by the perseverance of Allison Toepperwein and Artis Thompson III. The final big take home from the night was the speed by a couple rising sophomore ninjas: Daniel Gil and Thomas Stillings.

Stat of The Week:

After blazing through the course there was just 0.66 seconds between Thomas Stillings (103.51s) and Daniel Gil's (104.17s) completion times. 66 deciseconds is roughly just twice the length of time it takes to blink!

Of all 27 city qualifiers in American Ninja Warrior history there was only one wherein the fastest time was decided by a narrower margin, in the Midsouth Season 4 when Paul Kasemir (53.99s) edged out Jake Smith (54.32s) by just 0.33 seconds! (Surprisingly, two city finals were decided by narrower margins: Season 5 Baltimore Dan Galiczynski (190.90s) edged out Joe Morazsky (191.27s) by just 0.37 seconds and in Season 2 Travis Furlanic (103.35s) finished just 0.53 seconds faster than Levi Meeuwenberg (103.83s)).

[A comparison of the fastest (red) and second fastest (orange) city qualifying finishers. The Numbers represent the time difference between them in seconds.]

How fast were Stillings and Gil really going? Since every course consists of different obstacles the best metric I can use to compare top speeds across city qualifiers is the number of standard deviations the fastest time is from the mean (I know standard deviation brings many of us back to the scary times of high school math class, but trust me it's not that bad).

The larger the standard deviation the further the a competitor's results is from the average, relative to the rest of the competitors, thus, the more impressive the performance. Stillings blew through the course and posted a time nearly a full minute, 58.34s, faster than the average.

Using this method the mean the most impressive city qualifying performance was Elet Hall in Baltimore Season 5, when his time (53.79s) was less than half of the average completion time (107.56s), over 2(.07) standard deviations from the mean!

(For those of you who are curious, my statement following the first episode of the season, that city qualifiers are getting longer is still holding true, as Season's 8 city qualifier ACT is 196.26s compared to Season 7's 176.24s).

A bonus stat of the week for this week came as a result of the "smack talk" (hopefully it was more like a playful competition amongst friends) between Daniel Gil and Thomas Stillings. After learning that Stillings had bested him Gil told Kristen, "We'll just have to wait until city finals". Which prompted me to compare the successes of the fastest and second fastest city qualifying finishers in the city finals, because there's nothing like blowing a one-off statement into a full blown data table!

Calling just one obstacle the Ninja Killer this week is tricky because we had two returning obstacles which were eliminating ninjas all night. The Log Runner took out 10 of the 46 ninjas who attempted it leaving it with just a 78% completion rate.

Last year in the Military Qualifier the Log Runner was tough with an 83% (7/41) completion rate, but the course designers made it even tougher this year (although they removed the legs only restriction from last season)! They added another log, making 5 in total. They even added 6 inch increases in elevation between the first 3 logs, just to throw ninjas off even more (these numbers are courtesy of Alex Weber's Crashing the course video)! 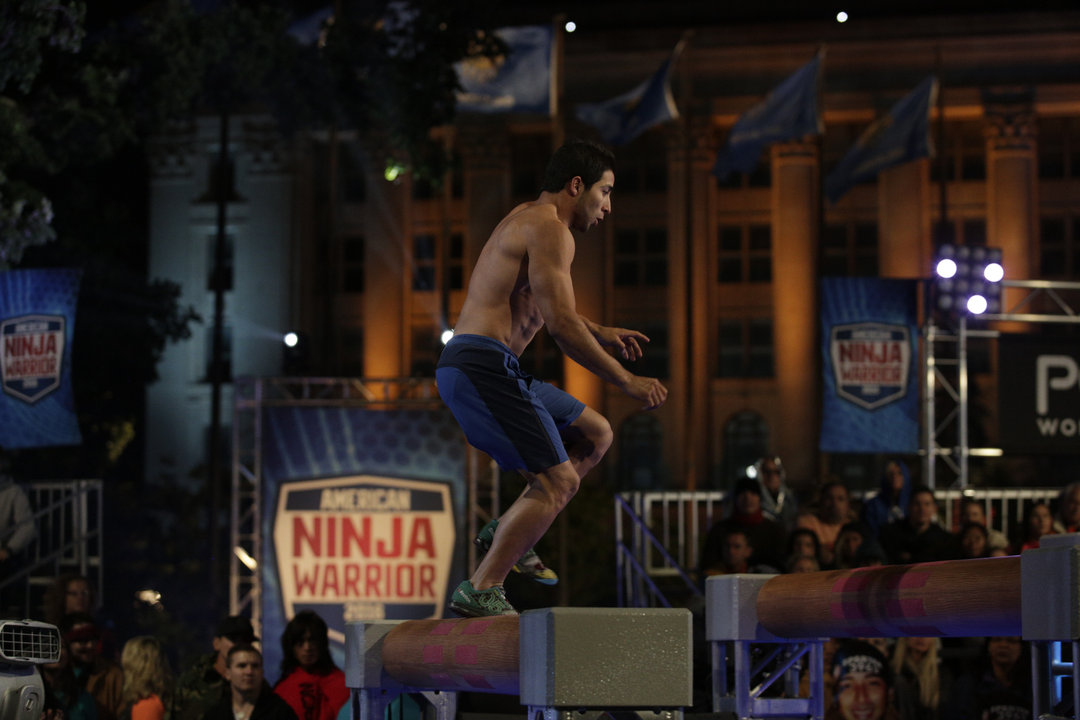 Of all the aired/annotated runs on Monday no obstacle took out more ninjas, 11, than the Tire Swing. This year's Tire Swing was a slightly different take on the obstacle of the same name which was the Ninja Killer, last season in the Orlando City Qualifier.

Although they appeared identical at first, halfway through the night Akbar revealed that the second tire was actually partially anchored in place by a bungee greatly limiting its movement. This minor tweak took the Tire Swing from a brutal obstacle last year with an 80% (8/41) completion rate and made it truly devastating with a completion rate of just 69% (11/36). No wonder so many great ninjas were unable to finish Monday's course!

The most common fantasy pick was Daniel Gil, and he missed out on his second straight fastest city qualifying time bonus point by just deciseconds. Unfortunately for the players who selected Lance Pekus, Kacy Catanzaro, and Sam Sann will not be receiving any points this season from these usually sound choices.

Brent Steffensen was the second most common fantasy pick this week, and although he didn't earn a point for the city qualifier, he did advance to the city final and may still earn his fantasy owners some points!

A special shout out to Zoe Rousch, the only fantasy player to draft Thomas Stillings, and thus the only one to receive the 0.5 point bonus for his fastest time. 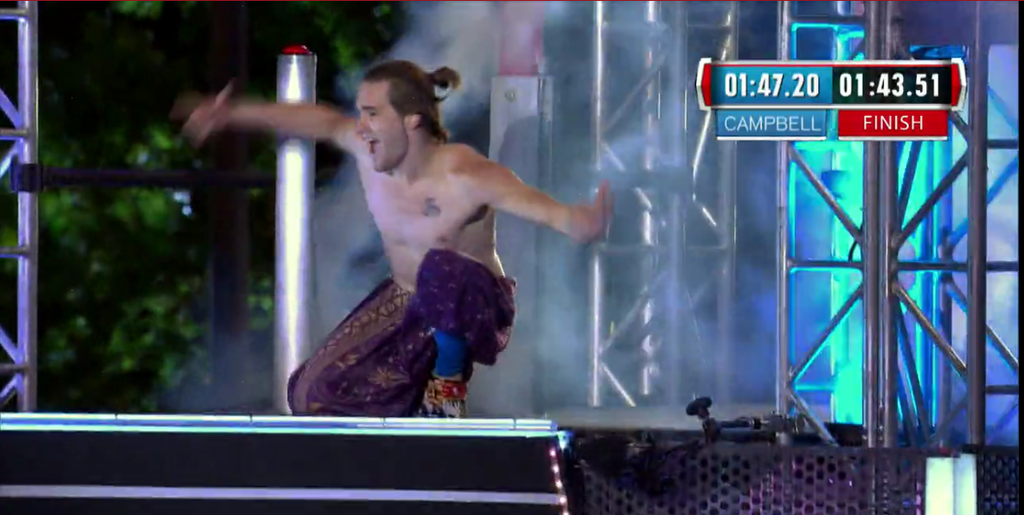 [Thomas Stillings celebrates after posting the fastest time of the night!]

By edging out Daniel Gil, Thomas Stillings solidified himself as a name to look out for. Last year in his rookie season Stillings finished the Houston City Qualifier with the 3rd fastest time, trailing only Daniel Gil and Brent Steffensen. He followed that up with a solid performance in the Houston City Final, where he was the fastest ninja to the Walking Bar, placing him in 6th overall.

Much like his more vaunted Texas rival, Daniel Gil, Stillings also made it all the way to Stage 2 in Vegas in his rookie season! While I always advocate for ninjas battling against the course together, a little friendly rivalry never hurt anyone, and who knows maybe Stillings vs. Gil could turn into new the Drew vs. Flip that enticed us to the Southeast region for so many years.

The Desjardins (Alex and John - Team Strong Fog) still hold the top two spots on our fantasy leader board with 6 points. Julia Lambert actually has 4 different entries which have each earned 5 points!

But I'm most looking forward to seeing if either Emily Fraizer (The Flash) or Bill Snook (Sneaky Snook) could match or surpass the Desjardins next week based on the performances of Joe Moravsky and Geoff Britten respectively. 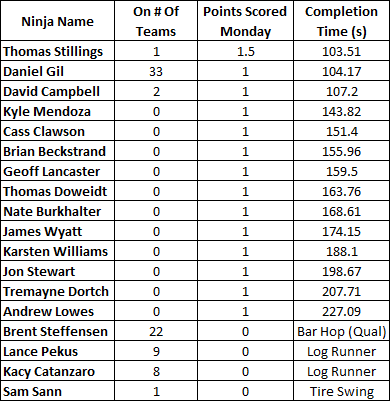 [Table of the ANWFantasy.com scoring for the OKC city qualifier.]

Error Correction: In the past few week's Fantasy Update section I have attributed Elet Hall with fastest time in St. Louis Season 6, this has been a mistake as that distinction actually belongs to Joe Moravsky. Sorry Joe!

We'll see "The First American Ninja Warrior" Geoff Britten begin his quest for back to back total victories, while seeing other fan favorites like Joe Moravsky, Jamie Rahn, and Michelle Warnky in the last city qualifier of Season 8!

[Below are all the ninjas who cleared the OKC city qualifier. Thomas Stillings just beat out Daniel Gil for the fastest time of the night. Brian Beckstrand has an awesome backyard course, and Jon Stewart is the oldest man to ever complete a city qualifying course.. again] 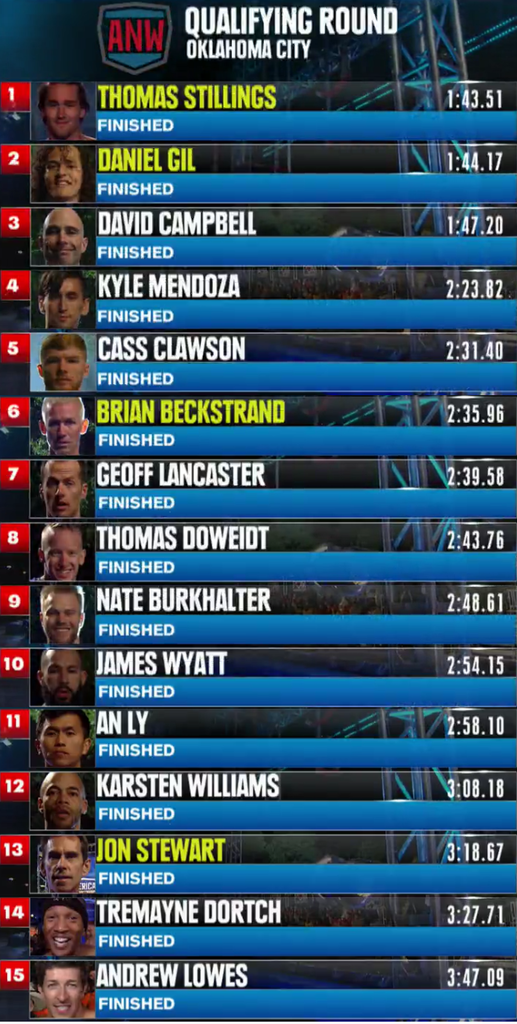 EDIT: An earlier version failed to mention that the in the military region in season 7 the Log Runner did not allow ninjas to use any part of their bodies except their legs.