I know we are now a few days clear of Monday's episode, but in case you haven't watched it yet I'm going to be getting into the results from the show, so please go watch it first!

This week we were taken on one the most compelling and emotional journeys in the history of American Ninja Warrior.

Zach Gowen walked up the started platform, removed his prosthetic leg and then took on the course. He bounded straight through all five Floating Steps. Just hopping to the first step was impressive, but he was able to overcome the crazy angles, the height differences, and the five foot gap between each grabbing the rope and swinging to the landing platform.

As if that wasn't enough, he mounted the Rolling Log, and with just one leg was unable to wrap himself around it. He pushed off and is leg flailed wildly in the air, as the log spun him round and round. He made 5 full revolutions around the log but he hung on! His run came to end on the Fly Wheels, but overcoming those two obstacles was truly inspirational.

Then we saw the return of Michael Stanger, the man whose wife became ill and in order to take care of her he began working out, so he could literally carry her up and downstairs. Amidst his working out, he and his wife found American Ninja Warrior, and he spent 8 days in the walk on line just so she could get a chance to see him run.

Then this year we find out his two adorable daughter's have the same devastating disease as their mother! Just heart wrenching stuff. Again, Stanger delivered a powerful and poised performance until he was tossed off the Disc Runner, nearly landing in the open and overjoyed arms of his family. 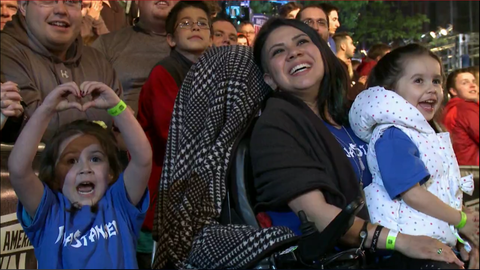 [Enedina Stanger and her girls were all smiles the entire night!]

With these emotional and inspirational runs not about the results. It's about overcoming whatever life throws at you, and never giving up. In just showing up these men overcame obstacles, and sent the message that you can too.

Stat of The Week:

Meagan Martin completed her record breaking third straight City Qualifying course. I know you've probably seen this start or remember hearing during her run but I'm going to dive into it a little more and show you just how impressive it really is.

Starting with the fact that not only is Meagan's third City Qualifying clear record breaking, she's breaking her own record! Only 4 women have ever completed a City Qualifying course: Kacy Catanzaro, Michelle Warnky, Meagan Martin, and Jessie Graff.

Yet; Kacy, Michelle, and Jessie have each only completed one City Qualifier (although each has technically cleared all the City Qualifying obstacles to reach the "back-half" of a City Finals courses as well).

Meagan's success is also impressive when you look at the total number of obstacles she completed in Season 6 and Season 7 (excluding Season 8 for now since not everyone has run). In this time frame she completed 26 obstacles across various courses, 12 in City Qualifiers, 4 in City Finals, and 10 on Stage 1.

The next most obstacle clears by a women are: 23 by Michelle Warnky and Kacy Catanzaro, and 17 Jessie Graff (despite missing Season 6 with a knee injury). 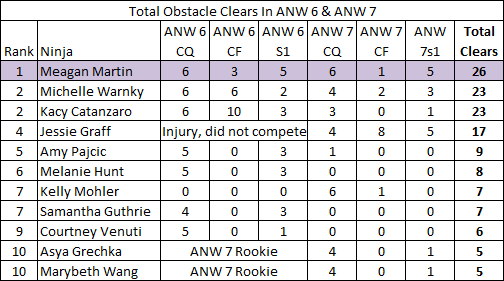 [This table shows the number of obstacles cleared by the top 11 women in ANW 6 & 7.]

Meagan's 26 obstacle clears in ANW 6 and ANW 7 place her in 50th place overall. During that time span, I have data for 481 ninjas (409 men, 72 women). This means Meagan outperformed over 350 men during the last two seasons.

Her 26 obstacle clears falls just below Brent Steffenson's mark of 27 and is tied with some of last year's impressive rookies Mike Meyers and Dan Yager (fellow Wolfpack member). 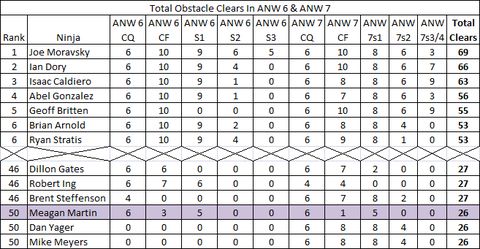 [This table shows where Meagan Martin's total number of obstacles cleared in ANW6 and ANW 7 falls among all competitors during those two seasons.]

Meagan has completed at least 2 more City Qualifier's than every other woman, and she's done so on her first three attempts. In the history of the show only 27 ninjas have completed more than 3 City Qualifying courses, putting Meagan in a tie for 28th most all time, with 33 other ninjas. 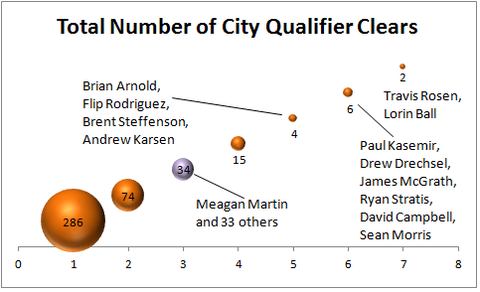 [Depiction of the total number of City Qualifiers each individual ninja has completed. The x and y axis represent the number of clears in a row, while the area of the bubbles represent how many ninjas have cleared exactly that many City Qualifiers.] 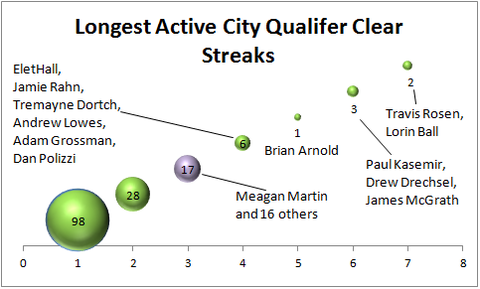 [Depiction of the longest active streaks of City Qualifier clears. The x and y axis represent the number of clears in a row, while the area of the bubbles represent how many ninjas have streaks exactly that long.]

For the first time this season the Ninja Killer was a brand new obstacle: the Fly Wheels. Although the Fly Wheels do not fall among the show's most treacherous obstacles 18.6% (8/43) of the (aired/annotated) ninjas who attempted it failed.

This makes it the second most difficult NEW obstacle, by fail rate, this season. Only the Pipefitter took out a higher percentage of ninjas, 20.5% (8/39). Additionally, this is also where the wheels fell off for two professional drivers who reached them: (I can't let Matt and Akbar have all the pun fun). 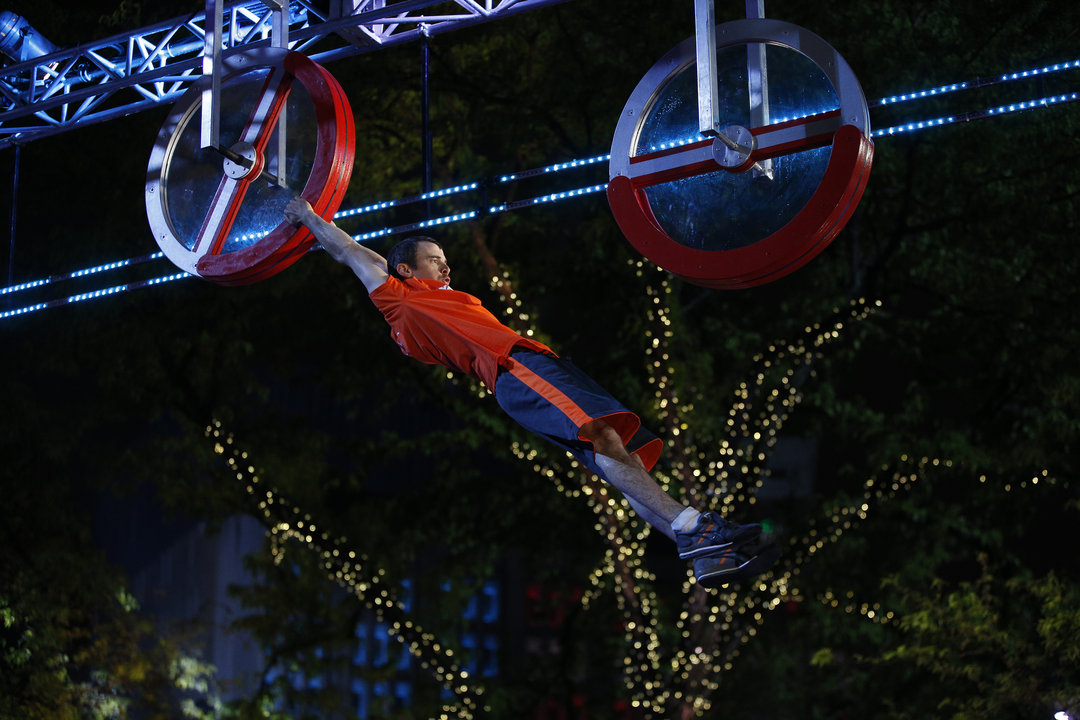 From the side perspective the Flying Wheels don't look menacing at all. In fact they look more like fun floating Poké balls than a ninja warrior obstacle. However, zooming in on these playful wheels we see that ninjas must propel themselves between wheels while holding onto a pair of 1 inch ledges.

On top of the small ledges the wheels spin, and the third is on a pendulum throwing off the timing for amateur and experienced ninjas alike. Completing this tight and tricky obstacle would be brutal on its own, but it comes just after the Rolling Log, which had ninjas trying to counter spin their dizziness all night. 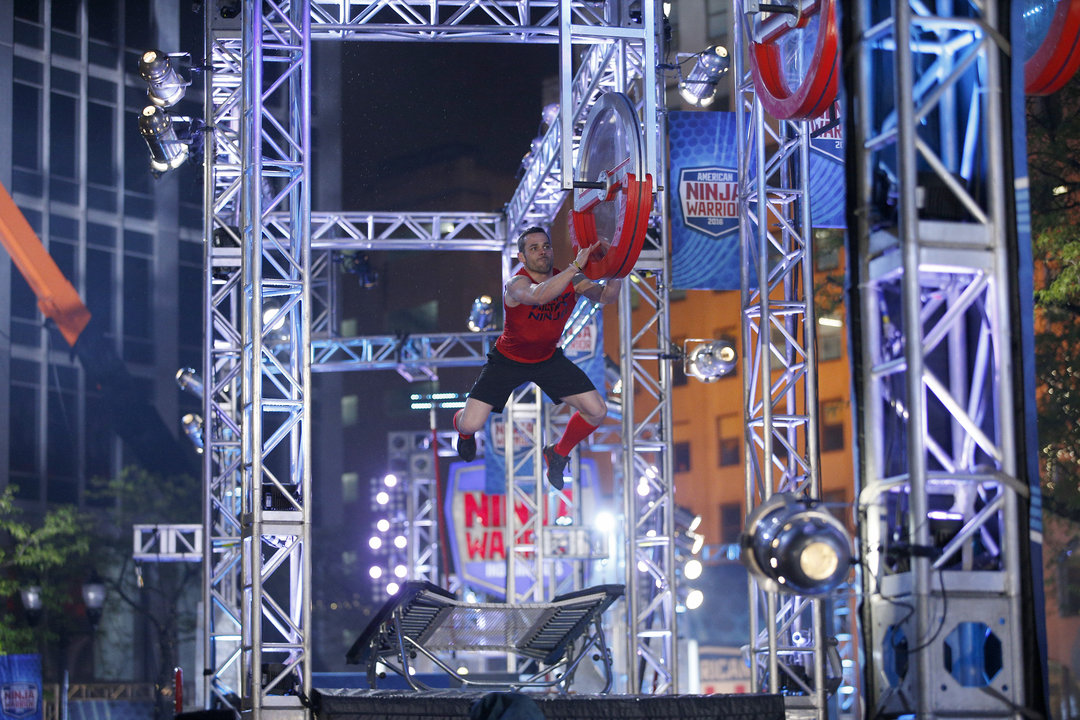 [Wesley Whitlam grabs onto the first of the Fly Wheels.]

(Fantasy Ninja? - What's that? Check it out here, some behind the scenes creation here, Unfortunately we are no longer accepting entrants for Season 8 - but you can check results for all your favorite ninjas!)

Monday 25 ninjas cleared the Indianapolis City Qualifying course. 6 such ninjas were selected by fantasy players and thus earned their team fantasy points. The most common fantasy pick was Ian Dory who did his owners proud and cleared the City Qualifier with ease!

A special shout out to Austin Bartholomew (stacked house/Power House Legands) who was the only fantasy player to select Monday's fastest ninja Lorin Ball and earned both his teams a 0.5 point bonus.

[Lorin Ball victory crawls through the finishe'rs gate after posting the fastest time of the night!]

It's very shocking that Lorin was not selected by more fantasy players. Lorin is one of the true original ninjas, he submitted a video to be part of American Ninja challenge 2 but unfortunately was not selected to take part in Ninja Fest 2 (2007).

Once American Ninja Warrior began, Lorin became a staple, he's completed 7 straight City Qualifying courses, tied for the most ever with Travis Rosen. Lorin has advanced to Mt. Midoriyama 3 times, and each time he's completed Stage 1.

Lorin ,like Drew Drechsel last week, is best known for his speed and has posted the fastest City Qualifying time 3 consecutive seasons, tying Elet Hall for the longest streak ever. This year Lorin suffered an injury in the off season, but is back stronger than ever and is more than capable of making a deep run this year. 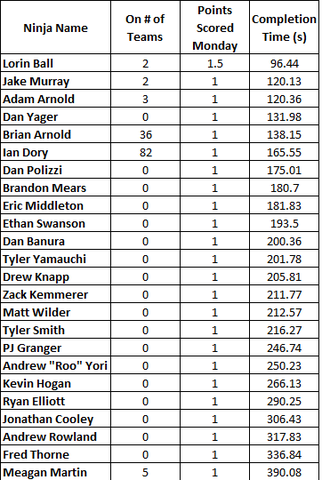 [Indianapolis ninjas who cleared, how many teams they were selected on, how many points they earned, and clear times.]

We head to Oklahoma City where Kacy Catanzaro will show why she's one of the top competitors, as well as seeing runs from other common fantasy picks Sam Sann and Daniel Gil. Also, we will no longer being accepting entrants for the fantasy leagues, meaning next week's fantasy standings will include spelling corrections (and be much more accurate)!

[Below are all the ninjas who cleared Monday's course, Lorin Ball posted the had the fastest time, Ian Dory was the most common fantasy pick, Meagan Martin was the only female clear, while Drew Knapp and Andrew "Roo" Yori posted impressive runs.]