As always I will be discussing the numbers behind Atlanta's qualifying results, so just in case you haven't watched the episode yet this is your spoiler warning. Minus the JJ Woods absolutely shocking fall off the Big Dipper, Wednesday's results were actually fairly predictable.

Now before I jump right into this week's numbers, I do want to mention that my data only comes from what is aired on the show. As such, I don't like to refer to all Ninjas making their first TV appearance as rookies, for all I know they may have competed several times and just never had their runs aired.

As such, I think of my data as including all the aired (yes those little "while we were away" clips count) and annotated (referring to ninjas who receive no air time, but do get shown in a results table like the one at the bottom of this piece) results. Okay caveats explained, to the numbers!

Stat of The Week: The best reason for Ninjas to keep trying

77.8% (14/18) of Ninjas who were in Season 7 and attempted the Atlanta City Qualifier, completed it. Alright, alright I know that's predictable, these guys did awesome last year that's why the show brought them back. However, even still this number is really high!

Heck, last week in the Los Angeles 69.2% (9/13) of ninjas who were aired /annotated in Season 7 and attempted the LA City Qualifier completed it. Even last week's numbers are a full 10% higher than the combined Season 7 City Qualifier completion percentage rate for all ninjas who were aired/annotated in Season 6, 59.4% (57/96). 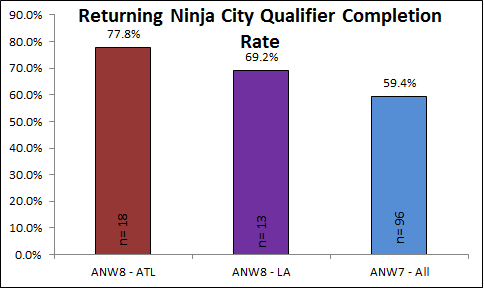 Breaking these data down into veterans who only attempted City Qualifier/Finals (aired in Season 7) and course and veterans who’ve attempt the Los Vegas Finals (Vegas Finalist Season 7) we see similar jumps from 19.6% and 15.7% (respectively) of competitors Wednesday to each making up 25.9% of the course clears Wednesday.

Here’s why I think returning Ninjas perform so well, in 2012 the Wilczewski brothers built the Movement Lab (then Warrior Lab) and ninja gyms have been popping up all across the country ever since. To date NinjaHq.net identifies 65 dedicated Ninja gyms and this doesn’t even include the countless backyard courses and obstacles people have built. These replicas are great but there's no experience like training on the real thing!

Even Mike Chick, The Ninja Lawyer said, testing for the Vegas Finals last year gave him a lot of confidence for this season. Now I don't have a way tracking which Ninjas tested the course, but I do have a large list of Ninjas who have attempted the course across multiple seasons. Using the last two complete seasons as a model, on average the more official American Ninja Warrior Courses a Ninja attempted in ANW 6 resulted in more stage clears in ANW 7. 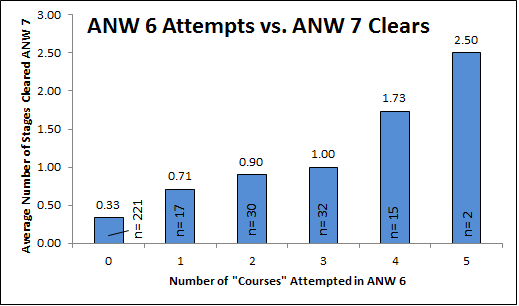 Again this could be chalked up to the fact these Ninjas are stronger, that’s why they’ve gotten to compete in back to back seasons. However, I don’t believe this to completely be the case.

Look at the difference between ANW 7 rookies/unaired Ninjas (people who, to my knowledge had no official American Ninja Warrior attempts in ANW 6) and those who ATTEMPTED just 1 course in ANW 6 (meaning they did not complete the city qualifier or go far enough fast enough to advance to the city final) the average is over doubled! Both groups consist of Ninjas who did not clear a single course in ANW 6 but those who attempted one performed far better on average.

Now that's not to say the only way to succeed at American Ninja Warrior is to have competed on American Ninja Warrior, that's cyclical, and just plain silly. We saw a perfect example counter to this Wednesday in Caleb Watson. Who despite all these Ninja training grounds claims to have never trained on any Ninja obstacles.

Caleb would have posted the fastest time of the night too if it weren't for one of the show's all time fastest competitors, Drew Drechsel. I'm just saying once competitors get their feet wet on the real thing (yup I went there) they tend perform very well the

This season the producers have not been messing around with the "old" obstacles they've brought back from ANW 7! For the second week in a row, the obstacle which took out the most Ninjas was a throwback to last season.

Unfortunately, this week I don't have any cool dimensions to explain why the Big Dipper is so tough, but I mean look at it! Ninjas have to hold onto a bar, slide down a roller coaster like ramp, then at the exact right moment let go of the bar so their momentum propels them to a distance they can hopefully reach the cargo net. That's a lot of stuff all going on at the same time! 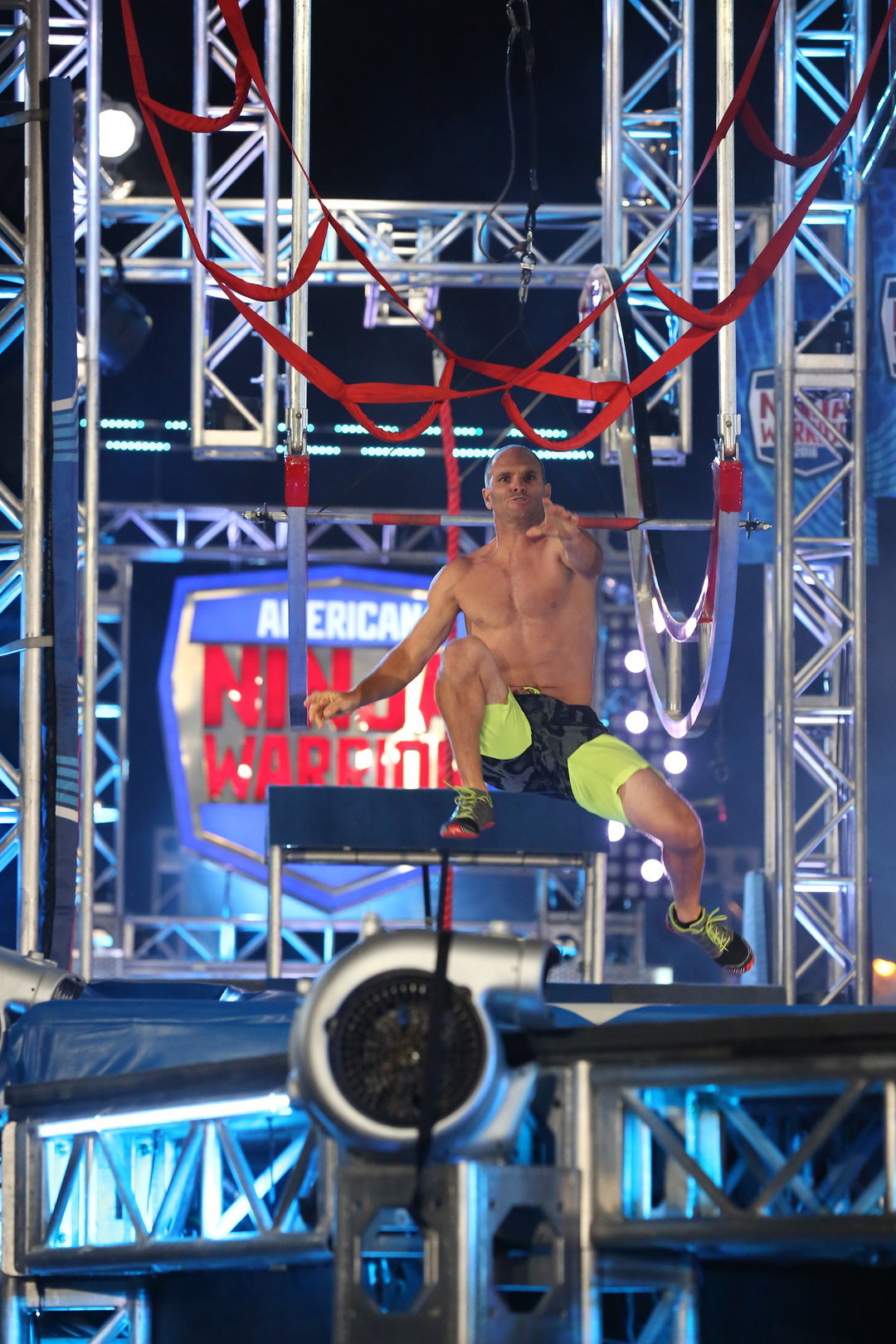 (Fantasy Ninja? - What's that? Check it out here, some behind the scenes creation here, It's not to late to make a team! – Same shameless plug, but also last reminder to submit teams before June 15th)!

As mentioned above 27 Ninjas cleared Wednesday's course. Of these 27 Ninjas 5 were selected by fantasy players and netted their owners at least 1 fantasy point. For the second week in a row the most common fantasy pick, Drew Drechsel (61), delivered and rewarded owners with the 0.5 point bonus for the fastest time of the night. Heck Drew DreSchel (43) was even entered more times than James McGrath (36).

Combining the Drew Drechsel entrants, and his erroneously spelled counterpart, Drew DreSchel, he appears on 104 fantasy teams. Of the pre-spell checked entrants (we’ll go through and correct all spelling errors next week) this is second only for Geoff Britten 112. 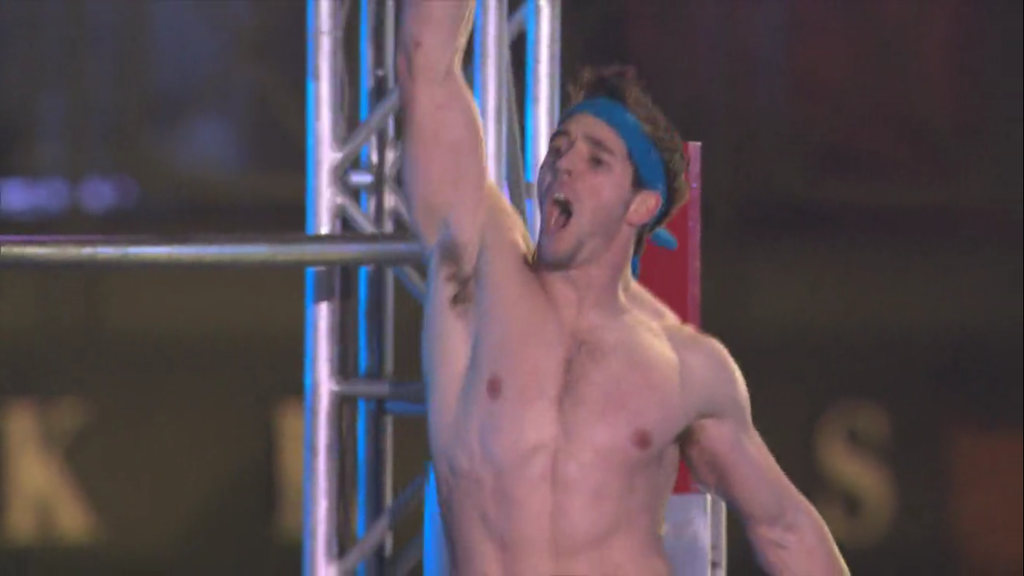 There’s a good reason Drew is the second most common fantasy pick. Wednesday tied him with Elet Hall as the only two Ninjas to post the fastest City Qualifying time 3 times. In 2014 Drew also competed in the Sasuke Asean Open Cup in Malaysia. The competition was divided into three events Climb, Hang, and Power. The Ninjas times were then combined to determine an overall winner, however, it was pretty easy to calculate since Drew posted the fastest time in each event!

So what do all those numbers account add up to? Drew’s been doing a lot of ninja stuff and he’s been doing it VERY well, this might be the season we see him atop Mt. Midoriyama, even if he does have a really hard name to spell!

See Drew face Evan "The Rocket" Dollard in a Ninja Quickie, or read some of his advice on training. 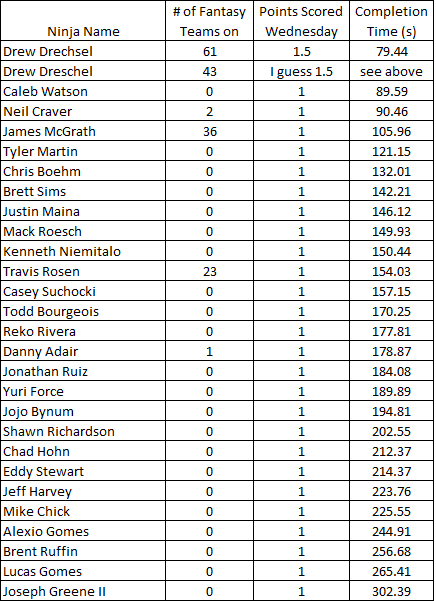 Shout out to the top 2 fantasy owners who have already earned themselves 6 points! With every ninja the selecting clearing their respective City Qualifiers and selecting the two fastest Ninjas! Congrats guys!

Even though you totally ruined this segment for the next couple weeks, since it'll be nearly impossible for anyone to score more points in the City Qualifier rounds.

2007 – Brett Sims (who completed the course last night with the 7th fastest time) is a true Ninja throw back! He was selected as the runner-up in the first American Ninja Challenge.

176.38 – This week’s average completion time, almost a full minute faster than last week’s 232.04. Sooo maybe I was wrong about all that "City Qualifiers are getting longer crap last week"

[Below are all the ninjas who cleared Wednesday's course, Drew Drechsel had the fastest time.]